Catching Up On The Action 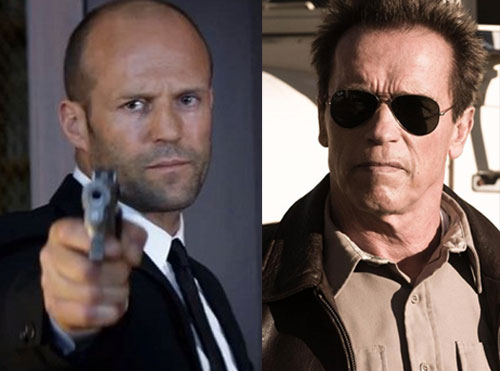 Anyone who reads this blog regularly knows that I love goofy action movies (particularly those of the 80s and early 90s), and that a few months ago, I was particularly looking forward to Arnold Schwarzenegger's The Last Stand and Jason Statham's Parker. Well, last month, I picked up the Blu-ray editions of both of those films, and wanted to just post a few thoughts here.

I pretty much loved The Last Stand. Yes, the story defies logic, but 1.) so what? and 2.) I really don't care when it's this much fun. I thought Arnold was great in his role of small-town sheriff, mentoring a small crew of deputies, and while the real action doesn't kick in until the third act, it's well-staged and executed by director Kim Jee-Woon, his stunt team, and the aging Arnold. The rest of the cast was adequate (I almost always enjoy Luis Guzman, and he's got a fun gag with Arnold's Conan sword), and I thought that actress Jaimie Alexander (Sif from Thor) was particularly good.

As for Parker, well, it turned out pretty much as I expected. It was an okay Jason Statham action flick and a poor adaptation of Donald "Richard Stark" Westlake's literary antihero. The filmmakers made the same mistake that nearly everyone has in adapting the character to film: they made him too human. The character in Westlake's novels is almost a machine, an unemotional, taciturn professional criminal with laserlike focus on the job at hand, whether it's a heist or revenge against someone who's wronged him. Here, they have the character verbalize (at least twice!) a "code of honor" that is both nonsensical and completely out of character. Too bad.

Statham does a professional job with what he's given, and I can't blame him for the mis-characterization. No, that falls fully on the script by John J. McLaughlin and the pedestrian direction of Taylor Hackford. Surprisingly, I thought Jennifer Lopez was pretty good.

Anyway, the movie has its moments, and I don't hate it, but it is a disappointment. Maybe they'll get it right next time.
Posted by Christopher Mills at 2:33 AM

Having recently read The Hunter, I'm also in agreement with your opinion of Parker. Statham comes off WAY too "friendly" - it's the same character he plays in 90% of his roles, the tough on the outside but actually soft and mushy on the inside anti-hero.

The problem, as you point out, is that Parker is NOT an anti-hero. He's a merciless bastard who will do ANYTHING to accomplish his goal. I recently caught most of Mel Gibson's Payback on cable, and again, they make the mistake of making him a "lovable tough guy".

The Director's Cut of Paybakc is a huge improvement over the theatrical version. Still not the "perfect" Parker adaptation, but pretty good.

I still like Point Blank the best, though The Outfit and The Split are pretty good, too. Both of those "humanize" Parker, but otherwise do a fair job of evoking the "Richard Stark" worldview.