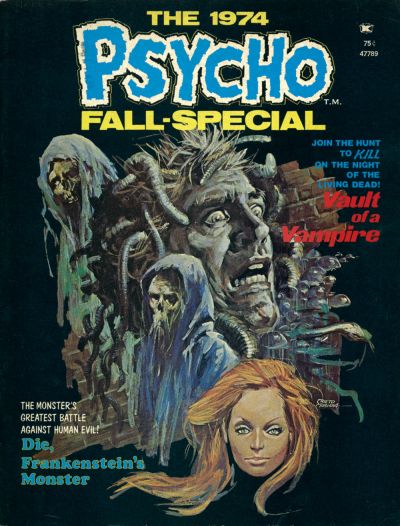 Today is also the 12th anniversary of my marriage to my wonderful soulmate, Brandi. A dozen years and still together... who would have imagined? Happy Anniversary, hon!
Posted by Christopher Mills at 3:40 AM 1 comment: 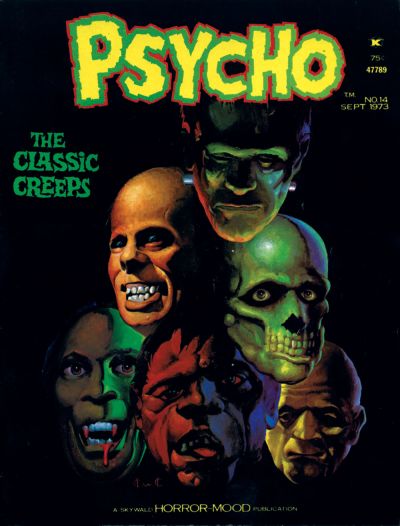 One week until Halloween... and here's another ghoulish cover from Skywald's Psycho comics magazine, this time from the great Ken Kelly. Enjoy!
Posted by Christopher Mills at 2:05 AM No comments:


"Hey, green-eyed lady..."  I really need to go watch Big Trouble In Little China now.
Posted by Christopher Mills at 12:03 AM No comments: 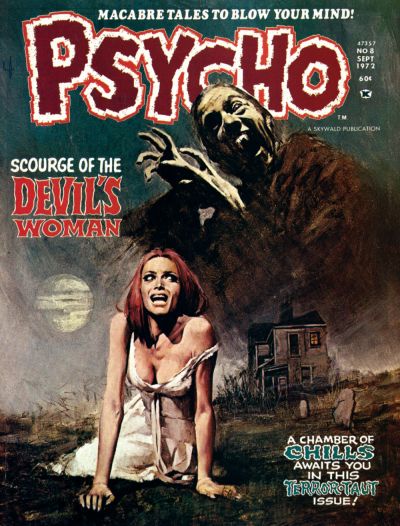 This week, our Wednesday Cover is another blood-curdling Skywald Psycho magazine masterpiece - this time painted by Enrich Torres.
Posted by Christopher Mills at 4:53 PM No comments:


Today is Global James Bond Day, celebrating 50 years of Ian Fleming's creation on the silver screen. And this is a video montage of great moments from the 007 films, set to Scouting for Girls' song, "I Wish I Was James Bond."

Don't we all?
Posted by Christopher Mills at 2:38 AM No comments: 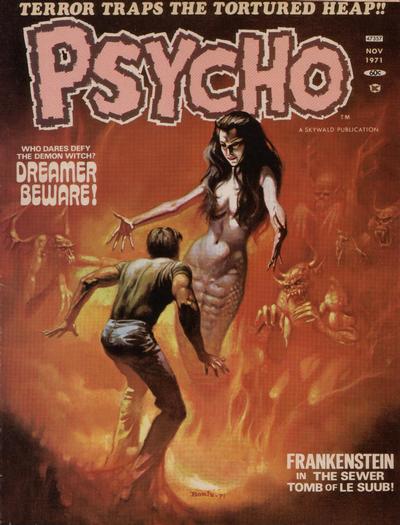 For this first Wednesday of October, we bring you another cover from Skywald Publication's Psycho magazine, also painted by Boris Vallejo. Enjoy!
Posted by Christopher Mills at 3:54 PM No comments:


I have mixed feelings about this preview trailer for the upcoming film, Parker, based on the Richard Stark (Donald Westlake) books. I've been a bit wary about Jason Statham's casting ever since I first heard about the project - we all know that I love Statham as an action star, but I suspected from the beginning that the filmmakers would end up adapting the character to his established film persona, rather than get him to play the Parker of the books.

Based on this trailer, it appears that I was right.

The opening scenes of the heist and double-cross certainly have a Stark/Westlake flavor, but the rest of the trailer plays out like every other Statham star vehicle. Which means I'll probably enjoy it as an action movie... but as an adaptation of Stark/Westlake? Probably not so much.

Still, it's only the first trailer, and it may simply be a marketing choice (and probably the correct one) to try and make it appeal to the legions of Statham fans who probably don't have the foggiest idea of who the character Parker is. 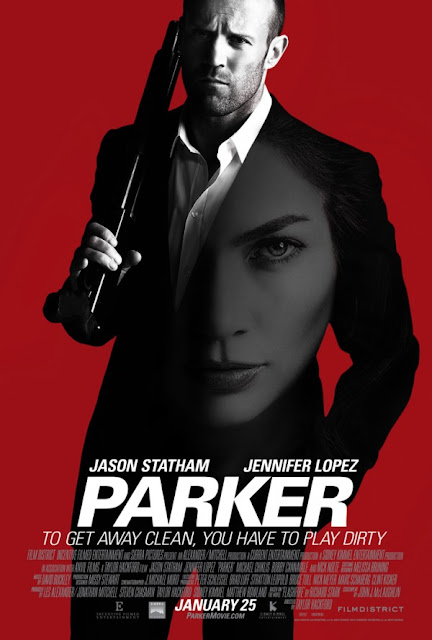 I do love the poster, though. Nice, clean, striking design.

From Here To Eternia

I generally don't subscribe to the concept of "guilty pleasures." I've always felt that you should never be ashamed or feel guilty about liking "bad" movies (or anything else, for that matter), because the point of entertainment is to enjoy yourself, and it doesn't matter why you like something, as long as you have fun.

That said, when it comes to the 1987 live-action, Cannon Films adaptation of the Filmation cartoon series, Masters Of The Universe, I do sometimes feel a bit embarrassed. Mostly because I've found that admitting my fondness for the fantasy flick inevitably leads to ridicule. Never mind that the production design (by the great William Stout) is gorgeous, or that the Rob Conti-emulating-John Williams score is big, bombastic and beautiful, or that Frank Langella's portrayal of sorcerer Skeletor is sly and satisfyingly sinister... it's based on an 80s cartoon starring a guy named "He-Man."

But I do like the Gary Goddard-directed movie, which comes out on a (unfortunately bare-bones) Blu-ray today, and I liked it even when I dragged my then-girlfriend to see it in theater in the Summer of 1987. It's just a fun, fast-paced fantasy adventure with a memorable cast (Dolph Lundgren in his first lead role, a young Courtney Cox, icy-eyed & sexy Meg Foster, and the unforgettable Billy Barty, among others), terrific 80s special effects, and a ridiculous plot that hangs together just... well enough.

It's not a classic of the genre, and it may not even be very good, subjectively, but I like it a lot (for all of the reasons cited above), and will be picking up the Blu-ray edition this week.

ADDENDUM: My local Bull Moose store - where I buy the DVDs and Blu-rays I'm too impatient to order online - actually let me down this week, as they didn't get any Master Of The Universe Blu-rays. According to their computer, all the other stores in the chain got copies, but their store didn't. Oh well, I put one on order. Hopefully they'll get it in by my next trip to town....
Posted by Christopher Mills at 1:33 AM 3 comments: 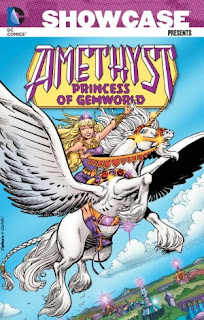 I hope people won't think any less of me as a man when I reveal that I'm looking forward to getting DC's latest Showcase Presents volume - Amethyst, Princess of Gemworld.

When the series originally appeared back in the 80s, I was reading mostly gritty adventure comics like Jon Sable, Freelance, Ms. Tree, Grimjack and Scout. A book about a teenage girl who magically transforms into the adult princess of a fairy tale fantasy realm - where everything was named after gemstones! - held little appeal for me.

But nowadays, with mainstream comics producing very little of interest for this aging, curmudgeonly old fanboy, I'm discovering - and rediscovering - a lot of good stuff in reprint volumes. And while I never read Amethyst back in the old days, I did read - and loved - DC's Blue Devil, a tongue-in-cheek superhero series written by the same guys who created & wrote Amethyst, Dan Mishkin & Gary Cohn. In fact, I followed that book for its entire first run, and really enjoyed and admired the writing team's style and sense of fun.

I've also been a life-long fan of artist Ernie Colon, who drew most of the Amethyst stories. I've especially enjoyed his fantasy and adventure work, so it seems long past time to check out his art on this series. From the various bits and pieces I've glimmed over the decades, it looks like some of Colon's best work.

Anyway, the collection comes out this week, and I plan on getting it. The only sticking point is that it does not seem to be complete - according to what I've read, it includes the character’s preview appearance in Legion of Super-Heroes #298, the original Amethyst, Princess of Gemworld 12-issue limited series, the Amethyst Annual #1, DC Comics Presents #63... but only the first 11 issues of the 16-issue ongoing Amethyst series. That leaves a full five issues uncollected, which is not nearly enough material for a second Showcase volume.  Dammit.