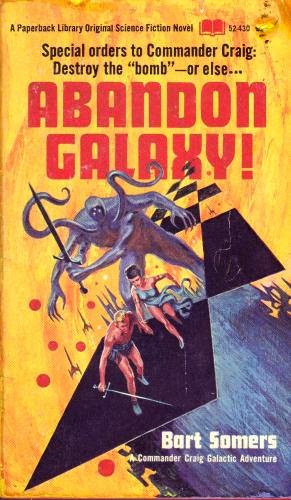 Abandon Galaxy! is the second of two "Commander Craig Galactic Adventures" by "Bart Somers," one of the countless pseudonyms used by the prolific Gardner F. Fox.

Although published in the late Sixties, the "Commander Craig" books (the first tome is called Beyond The Black Enigma) harken back to 30's-styled space opera pulp, and are outrageously plotted. Great fun. I'm not certain who the cover artist is, but it's been suggested to me that it might be the work of Jack Gaughn.

Posted by Christopher Mills at 12:00 AM 2 comments: 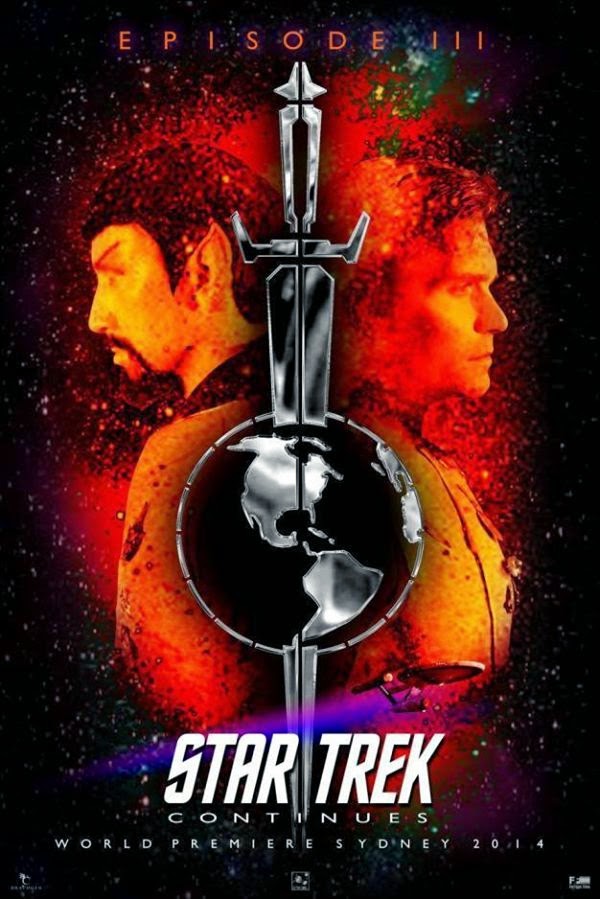 There are numerous fan-made Star Trek series online. James Cawley's Star Trek: New Voyages/Phase II is probably the best known, and over the years, his team have produced a number of enjoyable Trek adventures . But, in my opinion, the best at capturing the feel of the classic series is Vic Mignogna's Star Trek Continues. The cast includes James Doohan's son Chris Doohan as Scotty and Mythbuster's Grant Imahara as Sulu. The sets, costumes, and overall production values are uncannily accurate, and the visual effects are terrific! Vic Mignogna, an experienced actor with lots of voice work to his credit, personally plays James Kirk, and he does a remarkable job of channeling the great Bill Shatner, and never lapses into parody. It's amazing how well he captures Shatner's swagger.

The first episode, "Pilgrim of Eternity," is a sequel to TOS' "Who Mourns For Adonais," with original actor Michael Forest reprising his role as Greek god Apollo. The second episode, "Lolani," revolves around a fugitive Orion slave girl and her owner - played by Lou Ferrigno (in green body paint, of course)!

The third episode, "The Fairest Of Them All," a direct sequel to the classic "Mirror, Mirror," went live this week (you can find it on the Star Trek Continues YouTube channel), and it's another winner.

If, like me, you find the new Star Trek films by J.J. Abrams and company lacking the spirit and style of Gene Roddenberry's original show, I highly recommend that you check it out.

Along with the three full-length episodes, the Continues crew has shot a couple of short Trek vignettes, too. Here's my favorite - and a nice sample of the show's production values. 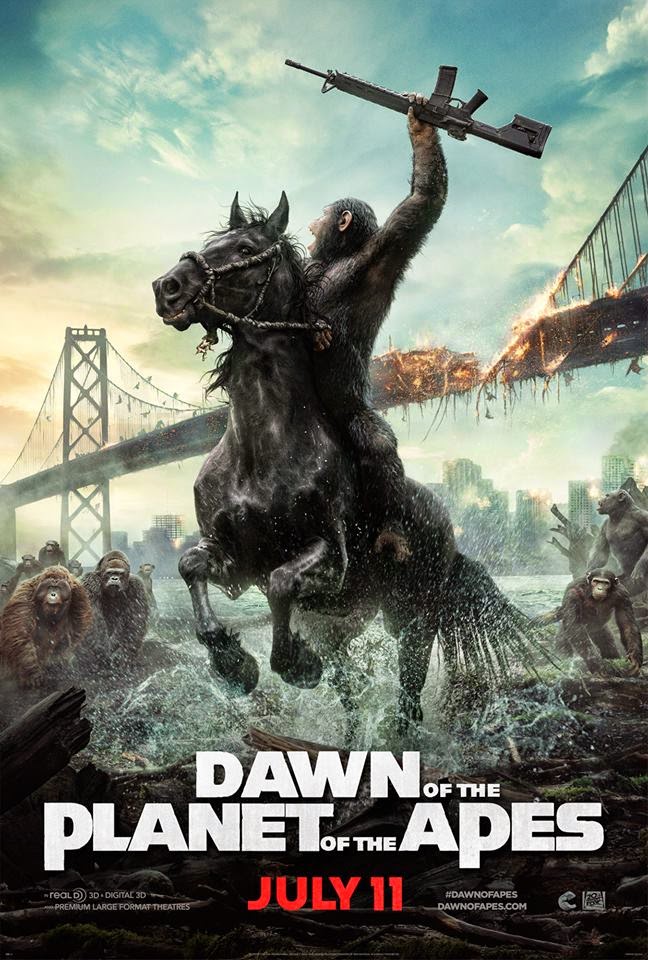 Now, this is what a movie poster should look like! I'm very surprised to see this artwork coming out of the Fox publicity department instead of just another big monkey face. I was surprised by Rise Of The Planet Of the Apes a couple years back, and the forthcoming sequel looks really good, too. This dynamic, imaginative poster's just the tasty icing on the cake! If I was still collecting one-sheets, I'd buy one of these for sure.
Posted by Christopher Mills at 1:43 PM 2 comments: 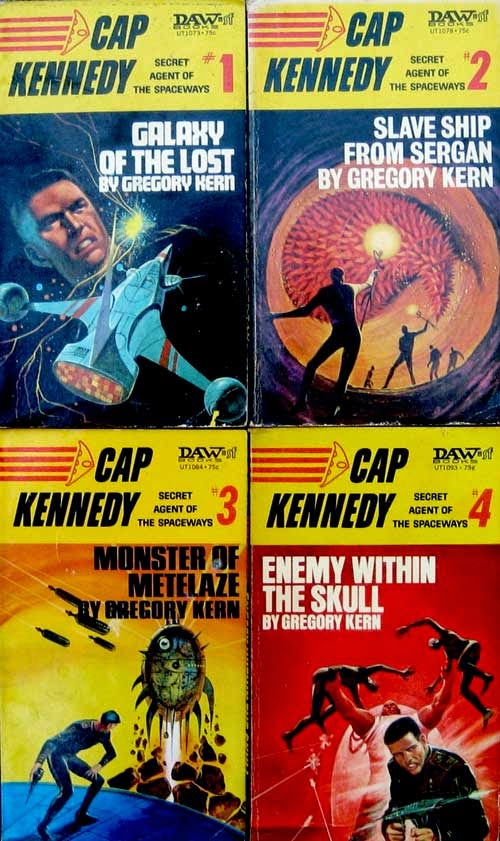 I don't know much about DAW Books' "Cap Kennedy" series, written by British sci-fi scribe E.C. Tubb under the pseudonym of "Gregory Kern." Nor do I know the name of the artist (I'm now told that it's Jack Gaughan) that painted these covers. What I do know is that the series was published in the 1970s and ran for at least 17 volumes.

I've never read any of these, but being as the tagline "Secret Agent of the Spaceways" appears to combine at least two of my favorite genres, I suspect that I'll hunt down a copy or two one of these days.
Posted by Christopher Mills at 1:18 PM 5 comments: 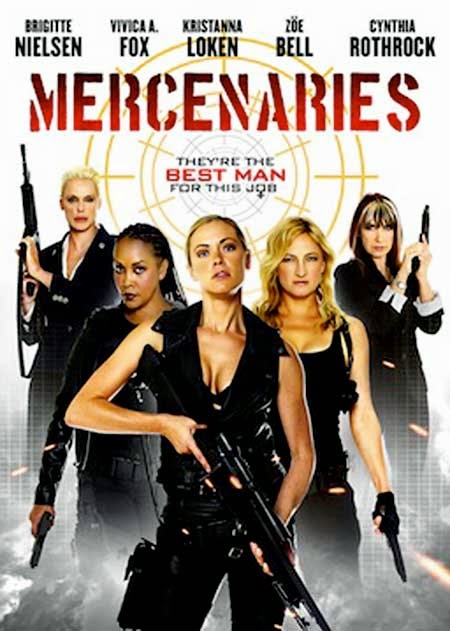 Back when Sylvester Stallone's first Expendables flick came out in 2010, and was a moderate box office hit, there was a lot of idle gossip and speculation that the producers might try their hand at a girl band version - an Expendabelles, if you will - uniting various female action stars in a high-octane adventure of their own. Of course, nothing came of that idea...

Until now. The Asylum, the low budget movie studio notorious for their cash-in "mockbusters" has stepped up and made the idea a reality with Mercenaries. Due out in August, when Expendables 3 hits the screens, Mercenaries features a pretty decent cast of fighting femmes: Brigitte Nielsen (Stallone's ex, and star of Red Sonja), Vivica Fox (Kill Bill), Kristanna Loken (Terminator 3), stuntwoman Zoe Bell (Death Proof, Angel of Death), and the legendary Cynthia Rothrock (China O'Brien, Yes Madam, etc.)

The plot, according to The Asylum's website: A diplomatic official is captured and imprisoned while touring a war zone, so a team of elite female commandos is assembled to infiltrate a women's prison for a daring rescue. It's directed by Christopher Olen Ray.

I'll admit, I'm looking forward to this one. It probably won't be good, but it will be fun seeing these dangerous dames all in the same flick.
Posted by Christopher Mills at 12:31 PM 1 comment: