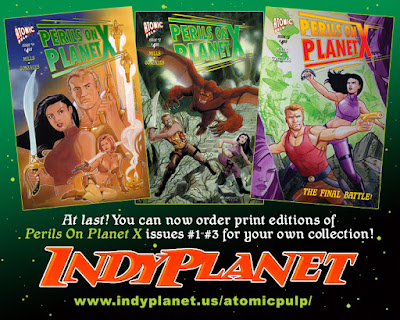 After more than 15 years in production, all three issues of the interplanetary swashbuckler, Perils On Planet X,  by Yours Truly and Gene Gonzales, with colors by Ian Sokoliwski, are available to purchase NOW!

They are only available by mail order from IndyPlanet. This is is the best way to support us and the book, as the profits go directly to Gene and myself. Each issue is 32 full-color pages, printed on high-quality, heavy paper stock and includes pin-up art by several well-known comics creators.

Sales of these issues will help Gene and I determine whether there's enough demand for Volume 2: "Agent of Empyr," so if you'd like to see further Perils On Planet X adventures, be sure to order your copies soon.
Posted by Christopher Mills at 8:34 PM No comments:

So far, I'm only scheduled to appear at one comics convention this year, and that's the Bangor Comic & Toy Convention at the Cross Insurance Center in Bangor, Maine on April 9th and 10th. It looks to be a good show, with some big name media guests like Star Trek's Nichelle Nichols and Denise Crosby, Doctor Who's Sixth Doctor, Colin Baker, wrestler Kevin Nash, and bunch of Mighty Morphin' Power Rangers cast members. Comic guests include Marvel inker Bob Wiacek, Chris Sprouse, Rich Woodall and Paris Cullins.

I'll be there with my wife, Brandi, and will have a bunch of stuff for sale, including Femme Noir, Gravedigger, Kolchak The Night Stlaker, Shadow House, and the brand new Perils On Planet X comic books. I've even had a new display banner made for the occasion.

Right now, I'm scheduled for a Comics Creators panel on Saturday afternoon, and Saturday evening, I'll be hosting a 50s sci-fi movie double feature of Cat-Women of the Moon and Teenagers From Outer Space! I'll be dropping some knowledge/trivia about the films and pretending to be an authority on the subject.

So, if you live in Maine or Northern New England, I hope you'll come to the show. I'd love to see you there!
Posted by Christopher Mills at 11:40 PM No comments: 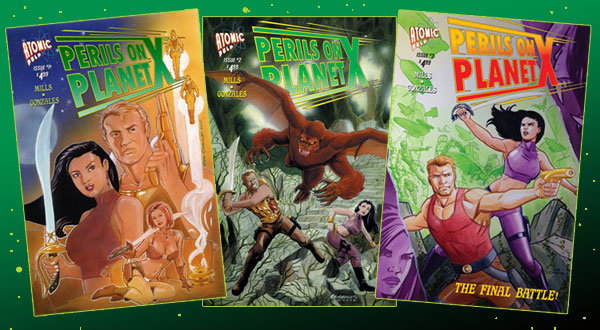 All three issues of Perils On Planet X have been sent to the printer. In just a very short while, they'll be available for mail order thru IndyPlanet.us. As soon as they're ready to go, I'll let everyone know here and Facebook and Twitter.

Since we're self-publishing these, buying copies online is the best way to directly support me and Gene Gonzales... especially if you'd like to see more Planet X comics one day! Remember, these will not be available in stores - only by mail order or directly from Gene or myself at conventions.

So, stand by - ordering details coming soon!
Posted by Christopher Mills at 2:21 PM No comments: