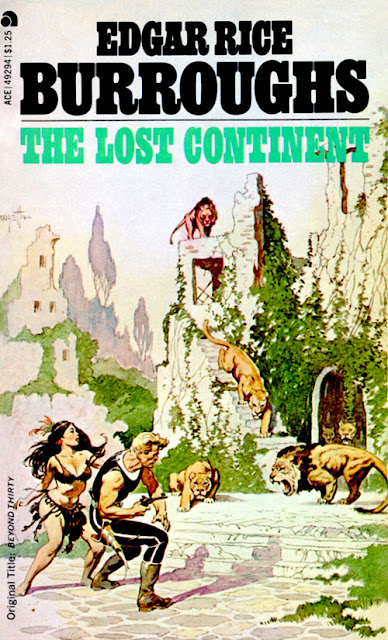 This week, we've got another terrific Frank Frazetta cover - this time for an Ace paperback edition of Edgar Rice Burroughs' science fiction novel, The Lost Continent (a/k/a Beyond Thirty). Enjoy!
Posted by Christopher Mills at 12:24 PM No comments: 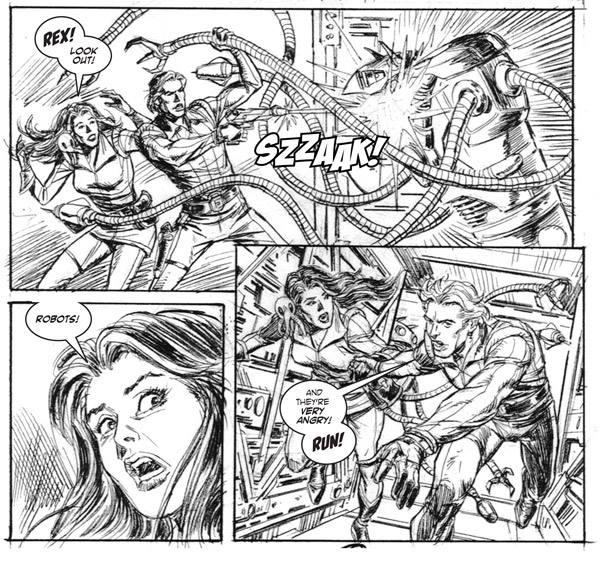 This past week and a half, I've been writing dialogue and placing rough lettering for the Rex Dexter of Mars story, "Menace of the Saurian Sphere," from my forthcoming graphic novel anthology with artist Peter Grau, Space Crusaders.

About two years ago, I sent Peter a plot, which described, page by page, the action of the story. Various life circumstances delayed further work for a while, but he recently finished his layouts/rough pencils for the whole tale. A week or so back, I needed to take a break from Gravedigger for a while, so I took Peter's roughs, loaded them into page templates and started writing the dialogue - and lettering the pages at the same time.

I find that lettering comics pages as I write the dialogue works very well for me - I scripted the last Gravedigger the same way. It helps me to see exactly where the words will be and allows me to make sure that I don't over write. And as a graphic designer, I think I'm pretty good at integrating the lettering with the art in a way that complements both.

Anyway -- I've now completed the script and letters for the Rex Dexter story, and I'm pretty happy with how it turned out. It's going to be a while yet before the book itself is done - Peter still needs to ink and color the story, and we still have a second feature to do - but it's definitely a testament to Peter's storytelling skill that I never had an easier time dialoguing one of my own plots.

As always... stay tuned for future updates.
Posted by Christopher Mills at 12:20 PM No comments:

Wednesday Cover: Maza of the Moon 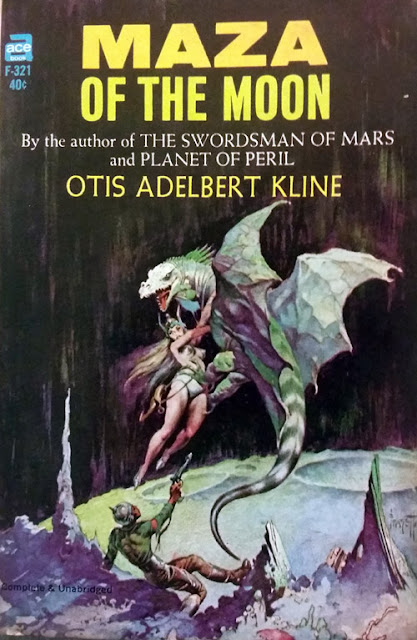 The artwork of the great Frank Frazetta graces the cover of Maza Of the Moon, an interplanetary adventure by Otis Edelbert Kline. I just acquired this vintage Ace paperback and have added it to my already formidable "To Be Read" stack...
Posted by Christopher Mills at 12:00 AM No comments:

Here's a very brief update on Gravedigger: The amazing Rick Burchett and I are plugging away on the second Gravedigger miniseries, which will be published by Action Lab: Danger Zone (hopefully in mid-to-late 2017). It's coming slowly, but it's gonna be great.

It's called "The Abductors," and is the longest Digger McCrae caper yet, running for a full four issues. It's an interesting challenge for me because the 4-issue length requires a different sort of structure and pacing. I also try to use each new Gravedigger story to try different storytelling approaches. This one, "The Abductors," is quite different from earlier Gravedigger stories, "The Predators" and "The Scavengers," storytelling-wise.

Since our publisher likes them - and, apparently, so do fans and retailers - we've also got a slew of variant covers planned, and a terrific group of artists to draw them. Personally, I can't wait to see how all of these talented creators interpret Digger in their own unique styles.

Stay tuned for further updates and (eventually) some sneak peeks of pages (and maybe some of those variant covers?)....
Posted by Christopher Mills at 12:04 AM 1 comment: