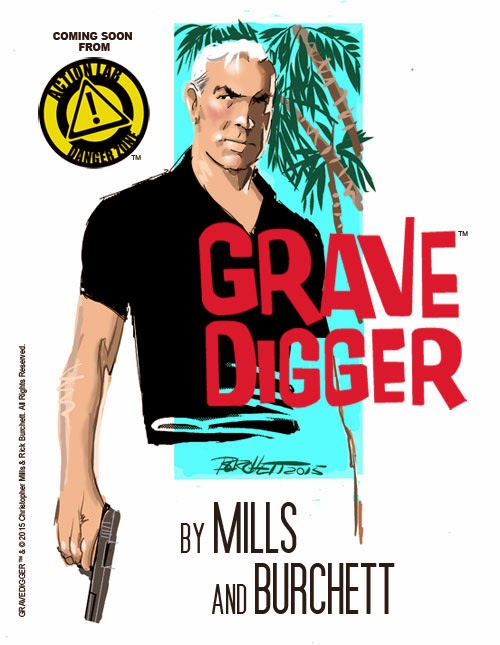 It was just a little over two months ago that the hardboiled crime comic that I created with artist Rick Burchett, Gravedigger, concluded its online serialization. At the time, I speculated that we wouldn't have to wait long for the character's return... and here it is.

Rick and I have just signed with Action Lab Entertainment's "Danger Zone" mature readers imprint, to bring the two existing Gravedigger sagas - "The Scavengers" and "The Predators" - to both print and digital formats in 2015. The stories will be presented in a three-issue comic book miniseries format and as a digital edition on Comixology. Action Lab will be making their own announcement soon, and there will be more details revealed then.

The release dates haven't been set yet, but you can be sure I'll be plugging the hell out of the book when the time comes!
Posted by Christopher Mills at 12:14 PM 4 comments: 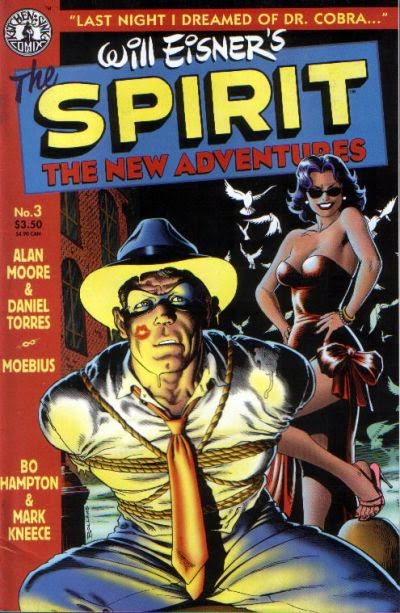 Back in 1997, Kitchen Sink Press published several issues of Will Eisner's The Spirit - The New Adventures, for which they invited a number of the comic industry's top talents to contribute original stories featuring Central City's masked crimebuster. A lot of great names were involved, and many of the stories were extremely good, sometimes rivaling the master's own tales. They sported some terrific covers, too - including this Brian Bolland masterpiece from Issue #3. It was also released as a limited edition print (shown below). 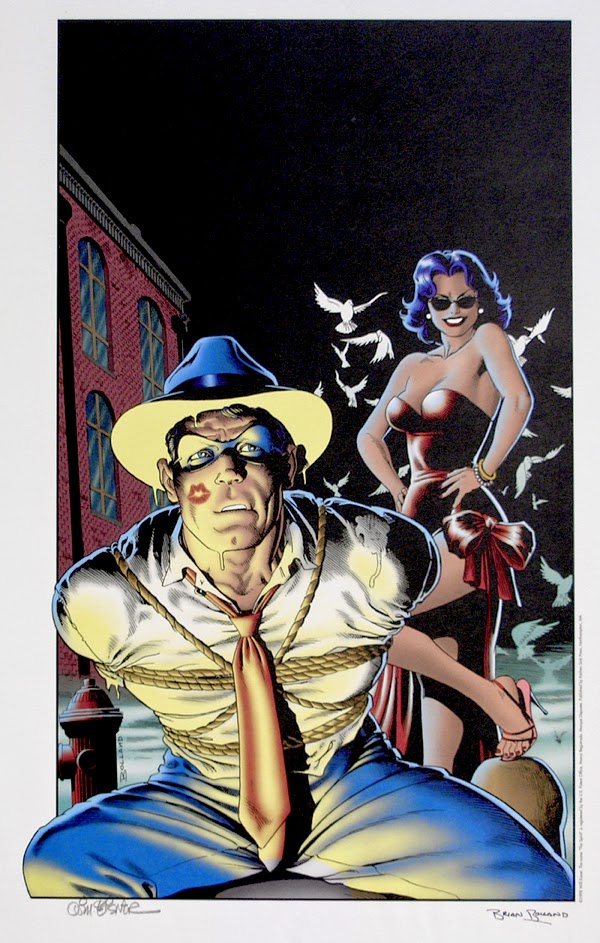 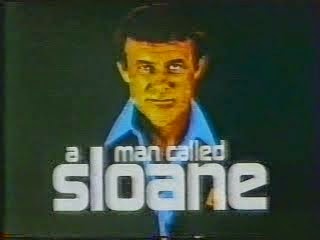 Well, we come at last to the final episode of A Man Called Sloane, "The Shangri-La Syndrome," directed by none other than T.R. Sloane himself, Robert Conrad, and originally airing on the 22nd of December, 1979.

I wish I could say that the series went out on a high note, but "Syndrome" is, in every way, a seriously lackluster affair.

Sloane is investigating the theft of some top secret material from Doctor Karla Meredith's (Daphne Reid) scientific institute. A meeting with one of her (young and pretty, 'natch) researchers is interrupted by an intruder whom Sloane pursues. By the time Sloane gets back, she is dead of apparent old age. It turns out that Meredith is working with KARTEL and an ex-Nazi named (of course) Hans Kruger (Dennis Cole) to clone a South American dictator.

There are some interesting concepts in here - Kruger is being kept young by an age-reversing formula and must stay in a hot environment to avoid reverting his to his true age - but nothing is done with them. There's only one gadget in this episode, and it's rather pedestrian, too.

It's a shame that the series came out when it did. NBC in 1979 was something of a creative wasteland, with network head Fred Silverman desperate to attract viewers to the floundering net. His approach to this was to program shows that were colorful, titillating, and, basically, stupid. This was the season of Supertrain, Buck Rogers In The 25th Century, Hello Larry and Pink Lady & Jeff.

It's also unfortunate that the producers didn't bother to actually give Conrad a character to play. Sloane was Conrad, basically, and was never shown to have any personal life, nor was there any backstory ever revealed for the character. In the pilot film - where the character was played by Robert Logan - Sloane was established as an art and antiques dealer, which at least provided him with a cover for his international travel, and provided a little color. This appears to have been forgotten by the time of the actual series. The character of Torque was badly used as well. A giant with a multi-purpose cybernetic hand should have been a lot more useful and interesting than he actually was. I don't blame actor Ji-Tu Cumbuka, though. He simply wasn't given anything much to do most of the time.

Anyway, it was fun re-visiting the series (again). I'm planning to finally review the pilot film, T.R. Sloane/Death Ray 2000 in the next week or so. Stay tuned!
Posted by Christopher Mills at 3:10 PM 1 comment:

Guns In The Gutters: IT RHYMES WITH LUST 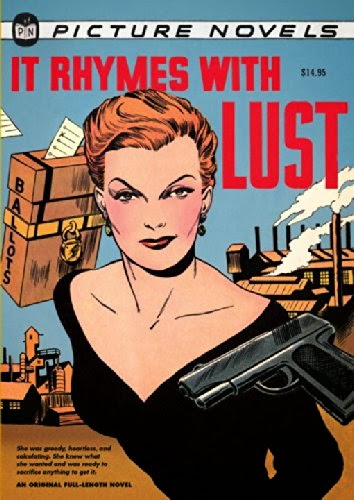 It Rhymes with Lust was originally published in 1950, and is considered by some comics historians to be one of the first – if not the first – modern graphic novel. Originally marketed as a "picture novel" by publisher St. John Publications, it was written by comics veteran Arnold Drake (The Doom Patrol) and novelist Leslie Waller (together using the pseudonym "Drake Waller"), with black-and-white art by Matt Baker (Sheena, Queen of the Jungle and Phantom Lady) and inker Ray Osrin. In co-author Drake's opinion, "I don't think there is much question that It Rhymes with Lust was the first graphic novel."

The edition reviewed here is a facsimile edition published by Dark Horse Comics, which includes an afterword by Drake, and biographies of Drake, Waller and artist Baker.

It Rhymes With Lust deals with the machinations of malevolent femme fatale Rust Masson, a seductive, red haired siren with an insatiable lust for power. Upon the death of her crimelord husband, Rust moves to take full control of the mining town Copper City – both its legal operations and its illegal ones. As part of her scheming, she brings an ex-lover, disillusioned and cynical reporter Hal Weber, to town and puts him into the Editor-in-Chief's slot at one of the town's two newspapers, hoping to use him as both a propaganda tool and intelligence agent. But, eventually, Weber tires of being Rust's patsy, and with the more wholesome love of Rust's own, blonde stepdaughter, Audrey, Weber finds the strength to stand up to Rust and moves to bring down her empire.

Drake and Waller have scripted a pitch-perfect noir potboiler, a story that deftly combines politics, crime and James M. Cain-styled sexual manipulation into one compact package. This is very much in the tradition of the pulp paperback fiction of the era. The dialogue is perhaps a bit too expositional and the captions a bit too weighty for today's tastes, but this was published in 1950, and follows the comics writing conventions of that era.

Matt Baker's art is exceptional. Known for his superior ability to render the female form, Baker proves to be the perfect choice to illustrate this tale of the archetypical femme fatale. With her short, mannish hairstyle and impeccable fashion sense, Rust is strongly contrasted against her idealistic stepdaughter, Audrey, with her lush blonde mane and soft features. All the characters are distinctive and instantly recognizable, and while the book is very dialogue heavy, Baker manages to keep it visually interesting through careful use of varying "camera" angles. It's superior work.

Overall, I liked It Rhymes With Lust quite a bit. My only criticism is that Drake & Waller's story is just a bit too talky and static. It really could have used just a little bit more action – another fistfight or firefight would have livened things up nicely. Definitely worth checking out, though.

Five out of Six Bullets.
Posted by Christopher Mills at 3:28 PM No comments: 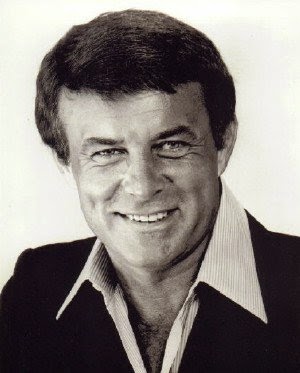 I don't know if it was because I was groggy and watching it at four in the morning, but I really enjoyed the penultimate episode of A Man Called Sloane, "Architect of Evil." (Original air date: December 15th, 1979.)

Worthington Pendergast (Michael Pataki) is the titular architect, who has conceived a "perfect city" for KARTEL to build and rule in an undisclosed location. Who will construct – and ultimately, live in – this city? Well, Pendergast has a typically complicated and insane plan to solve that problem: using a ray projector that can increase the mass of objects, he intends to sink a ship carrying nuclear waste which will then contaminate a large portion of the West Coast of America. This will dispossess millions of people, who KARTEL (will somehow) then draft as slave labor to build their city.

Unfortunately for Pendergast, the unique "blue crystal" that makes the ray weapon work, has been stolen from his home safe along with his other valuables, by a cat burglar named Harry Helms (John Aprea), who has no idea what it is and thinks it's worthless. Fortunately, UNIT had Pendergast under observation and caught the thief on film, so Sloane is able to track him down, and ultimately impersonate him (an impersonation which, as usual, isn't very effective) in order to infiltrate Pendergast's operation...

The story is nonsensical, but for some reason, it plays out pretty well. Pataki's villain is suitably over-the-top, executing his own henchmen with sonic deathtraps and playing Bach's tocatta and fugue in D minor on the organ to relieve stress. There's a sequence set in a health club where burglar Helms attempts to kill Sloane in a manner highly reminiscent of the Shrublands scene in Thunderball, and an interesting – and unusual - climax featuring Sloane, Torque, a helicopter, and a lot of soapsuds.

Well directed by veteran TV and B-movie (Cujo, Alligator) director Lewis Teague, "Architect of Evil" is a satisfyingly silly but entertaining hour of spy-fi adventure, and is probably one of the best in the series.

Only one more episode to go!
Posted by Christopher Mills at 1:02 PM No comments: 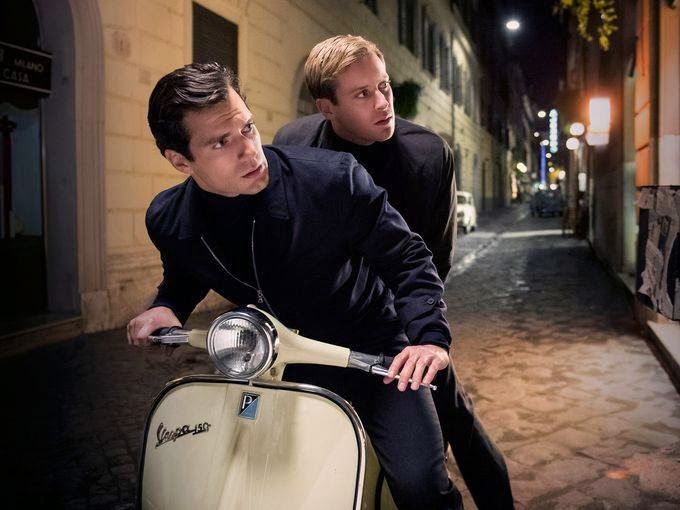 Anyway, I'm keeping my fingers crossed that it turns out okay...
Posted by Christopher Mills at 12:56 PM No comments: