What coulda/shoulda been: Back in the late 1990s, my pal James Chambers and I briefly had our own comics company called Shadow House Press. We published five issues of our horror anthology title Shadow House ('natch!) before we ran out of money and had to call it quits.

This gorgeous wrap-around cover by Kirk Van Wormer and Kevin Nowlan was intended to grace our (ultimately unpublished) Shadow House Halloween Special and features our horror hostess character, Autumn, offering some tricky treats to Jim's creation, the Lil' Ghoul Gang....
Posted by Christopher Mills at 12:01 AM No comments:


You may count me among the "Many More!"  Hope to see some of you there!
Posted by Christopher Mills at 6:34 PM No comments: 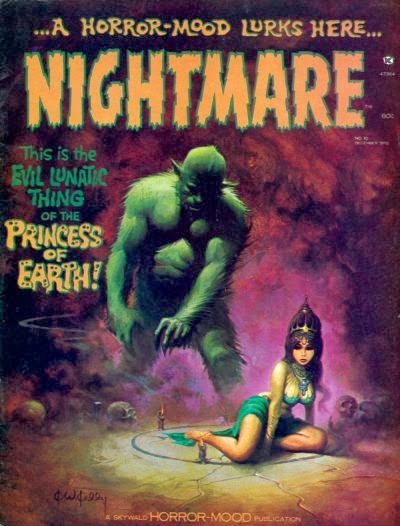 The Halloween "Horror-Mood" continues with another glorious Nightmare cover from Skywald Publications. This one is from issue #10, and the artist is the great Ken Kelly.
Posted by Christopher Mills at 5:08 PM 1 comment:

Part Of A Monstrous Breakfast... 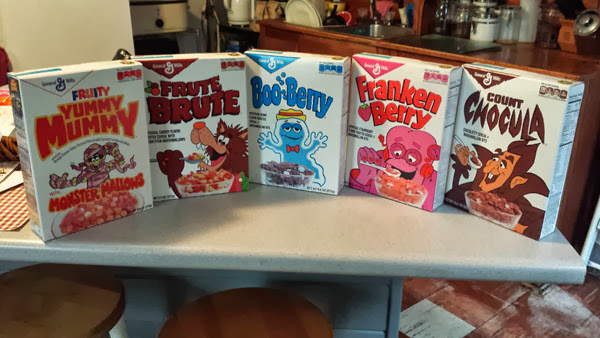 As previously mentioned on this blog, General Mills has celebrated the Halloween season this year by making available all five of their classic "monster" cereals... for the first time! While Count Chocula, Franken Berry and Boo Berry were pretty consistently popular, later additions to the line - specifically, Fruit Brute and Yummy Mummy - weren't around for very long, and were never available at the same time (until now).

Anyway, as the photo above testifies, I stopped by my local Target store on Friday night to buy some new shoes and a pair of warm slippers for the winter, and while there, I picked up one box of each variety (well, actually, I got two boxes of Count Chocula). While the cereals are available through numerous retailers, only Target has them in reproductions of their original "retro" packaging.

For the record, I did eat the Count Chocula this weekend (while watching 70s cartoons on DVD, 'natch). As for the others, well, they probably will not be fully consumed... but then, I really just wanted the boxes, anyway.
Posted by Christopher Mills at 12:20 AM 2 comments: 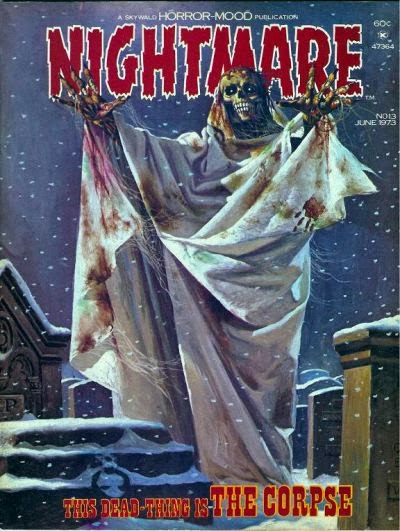 Here's another stunning cover from Skywald's Nightmare magazine (Issue #13), this time painted by Vicente Segrelles (according to the Grand Comics Database, anyway).
Posted by Christopher Mills at 4:04 PM No comments: 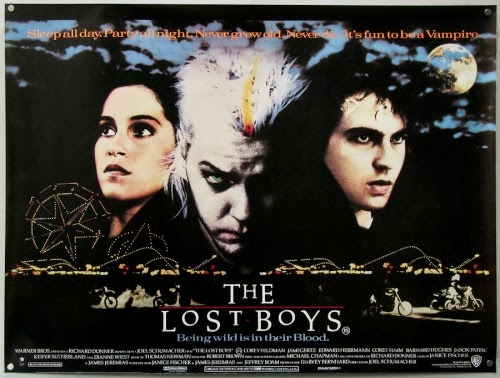 1987's The Lost Boys isn't really one of my favorites - I hadn't seen it since it originally aired on HBO and didn't care for it then - but revisiting it on Blu-ray was fun.
Posted by Christopher Mills at 11:00 PM No comments: 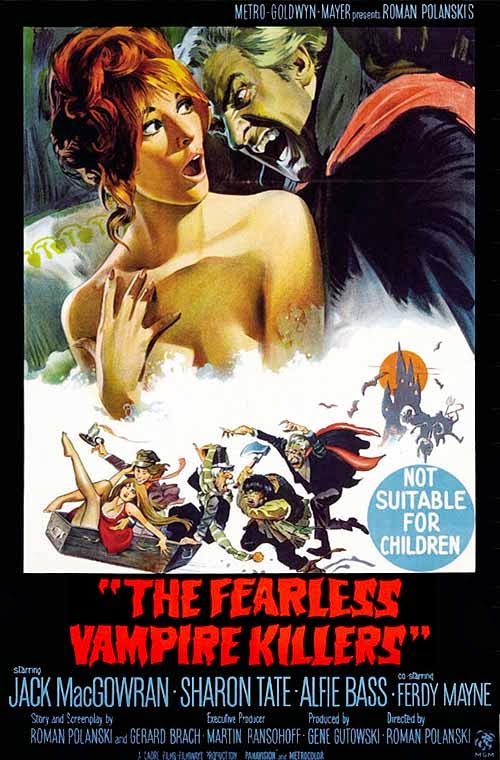 Tonight's Movie: Roman Polanski's 1967 horror spoof, The Fearless Vampire Killers, a visually arresting yet only intermittently amusing satire of Hammer-styled gothics. I'd only seen random parts of the movie on cable before tonight, but thanks to the Warner Archive streaming channel, I was able to finally check it off my list. Fun poster by the great Frank Frazetta. (Well, the bottom part is Frazetta, anyway.)
Posted by Christopher Mills at 10:22 PM 1 comment: 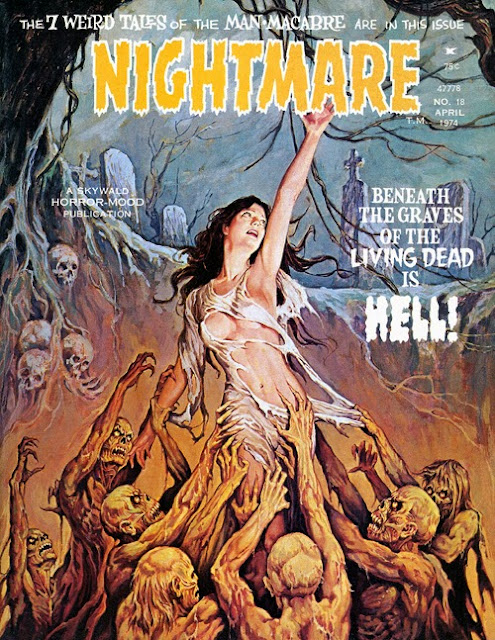 Issue #18 of Skywald's Nightmare, the predecessor and companion mag to their Psycho comics magazine. The Grand Comics Database credits Jose Antonio Domingo as the artist.
Posted by Christopher Mills at 10:16 PM No comments:

October Horror Moviethon: HOW TO MAKE A MONSTER (1958) 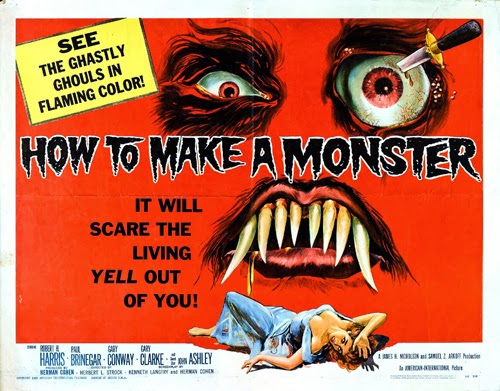 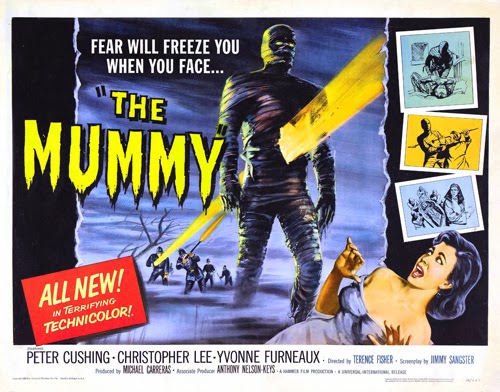 Tonight's movie - Hammer's color remake of the Universal "Kharis" films, with Cushing & Lee. Brandi reviewed it on her blog.
Posted by Christopher Mills at 11:30 PM 1 comment:

• Foot pain back, and it appears to be my old friend, gout. Laid up again. Yay.

• Numbers on yesterday's Gravedigger comic update were unusually low. Disappointing - and, given my state of mind today, discouraging. Need to find new (free) ways to drum up traffic. Facebook & Twitter and this blog aren't doing the job.

• Was hoping to get back to regular/semi-regular posting at DVD Late Show and Space: 1970 this month - depends on whether I can get the comics work on my plate and design gig that's supposed to show up soon out of the way.

It doesn't help that new Maine state tax laws going into effect today have shut down the only income I earned from those blogs, via the Amazon affiliate program. It wasn't much, but it was an additional incentive to keep putting in the work those sites require.

• News is just too depressing today. Will try to avoid it.

• Been watching a lot more current TV than usual lately. For the record, I thought the last four episodes of Breaking Bad were terrific, I liked the Agents Of S.H.I.E.L.D. pilot and think a lot of people were way too critical of it, and thought the pilot of Sleepy Hollow was goofy fun. Plan to follow S.H.I.E.L.D. and Hollow for a few weeks, at least.

• As far as October movies, I'm really looking forward to Machete Kills! despite the presence of Mel Gibson. Interested in Gravity, as well, despite presence of Sandra Bullock.

• I could really use a bowl of Count Chocula... hope I can make it to Target soon to stock up.
Posted by Christopher Mills at 2:17 PM 1 comment: