A very stylish trailer for a new, Italian Diabolik television series, based on the classic Eurocomic. I wonder what the chances are of ever seeing this on my side of the Atlantic?
Posted by Christopher Mills at 3:56 PM 1 comment: 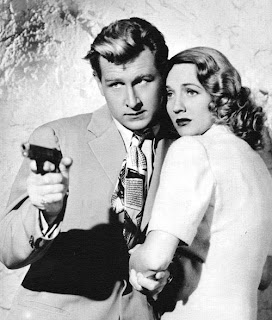 Phil Corrigan, alias Secret Agent X-9, was a popular comic strip character of the 30's and 40's (though the feature ran well into the 90's) created by the acclaimed mystery writer Dashiell Hammett and artist Alex Raymond (who would later go on to create Flash Gordon, and then Rip Kirby for the same newspaper syndicate). Universal Studios produced two movie serials based on the character, both simply titled, Secret Agent X-9; the first in 1937 and the second in 1945.

The 1937 serial has Agent X-9 functioning pretty much as a standard movie G-Man, chasing after a ring of international jewel thieves. It’s a very decent serial; Scott Kolk makes an adequate X-9, and Jean Rogers (Dale Arden in Flash Gordon) is a lovely leading lady. Unfortunately, it’s not really a spy story. Instead, it’s pure, Depression-era, cops and robbers melodrama.

The 1945 serial, on the other hand, is a genuine espionage adventure. This one stars a young, up and coming Lloyd Bridges as Phil Corrigan, Secret Agent X-9. The charismatic and talented Bridges was a far better actor than most other serial heroes, and his nascent star quality really infuses the 13-chapter serial with energy. Unlike some other chapterplays of the era, you don’t get bored between fistfights and car chases.

The story is set in 1943 on the aptly-named Shadow Island, a small isle of intrigue somewhere off the coast of China, which the Japanese have allowed to remain neutral. Of course, secret agents from all over the world descend upon the island, which is portrayed as a sort of South Pacific Casbalanca. Shadow Island is run by a saloon owner named Lucky Kamber (Cy Kendall), but he’s only allowed to operate at the sufferance of a sly and slinky Japanese agent called Nabura (Victoria Horne in faux Asian make-up). 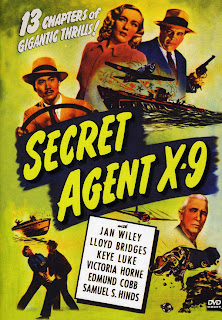 The plot revolves around the accidental discovery by a Japanese scientist (Benson Fong, Charlie Chan’s #3 son) that aviation fuel can be manufactured cheaply by mixing an artificial chemical called 722 with water. Seeing the obvious benefits for Japan’s war plans, Nabura devises an intricate plan to steal the formula for 722 from an American scientist in the States. Fortunately, Australian spy Lynn Moore (Jan Wiley) learns of the plan and, in response to her report, American Intelligence sends Phil Corrigan to Shadow Island to foil the plot. Soon after X-9’s arrival, he finds himself not only teamed with the pretty Aussie agent, but partnered with a very competent Chinese operative named Ah Fong (the great Keye Luke, Charlie Chan’s #1 son). It’s a good thing, too, because X-9’s got his hands full.

Shadow Island swarms with suspicious characters. Among the various factions maneuvering on Shadow Island are a mysterious French couple – Hotel owners Papa and Mama Pierre – whose motives and loyalties are unknown, and an enigmatic gentleman known only as Solo (Samuel S. Hinds) who sits for endless hours at Kamber’s bar playing tiddley winks. Additionally, there’s a Japanese submarine (and its crew) standing by to facilitate Nabura’s scheme, and a "civilian" German freighter commanded by Herr Kapitan Graf, in port.

Needless to say, double (and triple) crosses, gunfights, brawls and shadow skulking are the order of the day on this island of spies, and X-9 has to keep on his toes if he’s going to foil Nabura’s machinations. The serial is briskly-paced (unusually so, for a Universal serial, which tended to be more leisurely than those produced by studios like Republic and Columbia) by directors Lewis Collins and Ray Taylor, and has fairly high production values. The pre-WWII setting is fascinating, and the cliffhangers are all pretty exciting. The final chapter is satisfying, too – not always the case with these Saturday matinee chapterplays.

VCI Entertainment offers both Secret Agent X-9 serials on DVD. Both look good, but the 1945 serial looks particularly fine for its age. There’s some occasional, minor print damage here and there, but the transfer is very solid for the most part. The VCI disc also includes a commentary over the first chapter by mystery writer and comic strip historian Max Allan Collins, an interview with Bridges’ son, Beau Bridges, a still gallery, and trailers for other VCI serial discs.

I'm a big fan of old serials, and the 1945 Secret Agent X-9 is one of my very favorites. Not only is it a great serial, but a fun spy movie, too.
Posted by Christopher Mills at 11:26 AM No comments: 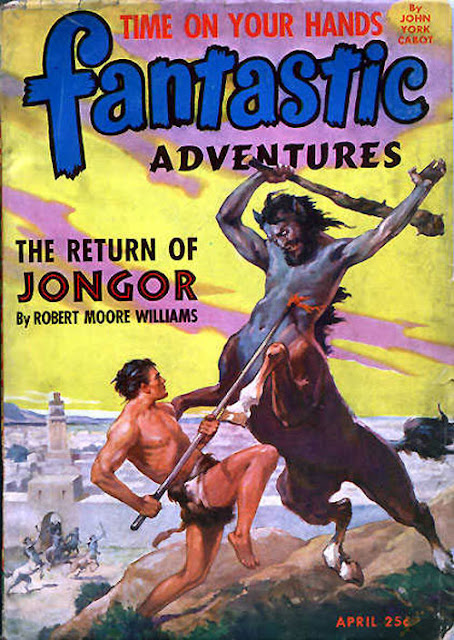 Robert Moore Williams' dinosaur-riding jungle man, Jongor of Lost Land, battles a centaur on this Fantastic Adventures cover. The cover art illustrates a scene from The Return of Jongor, the middle installment of Williams' pulp trilogy. I've got these adventures in paperback (with Frazetta covers), but it was cool to stumble upon this scan during one of my recent Google safaris...
Posted by Christopher Mills at 12:32 AM 1 comment: 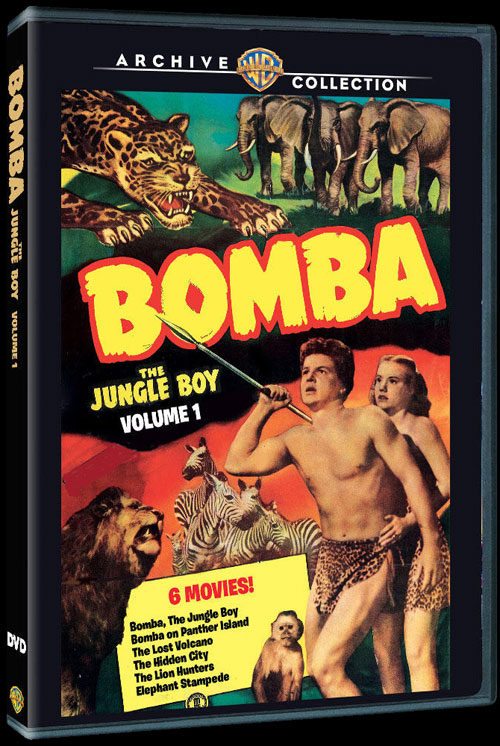 This week, Warner Archive released the first volume of Bomba, The Jungle Boy films on DVD. The films, based on a children's book series published in the 1920s, were produced by the Poverty Row studio Monogram Pictures starting in 1949 as a vehicle for youthful actor Johnny Sheffield, who had just completed his tenure as "Boy" in the Tarzan films produced by MGM and RKO. As Bomba, Sheffield was able to remain in the jungle spotlight for a few more years (until 1955!), in much the same manner as his on-screen father figure, Johnny Weismuller, who moved on to make a series of low-budget Jungle Jim B-movies for Columbia, post-Tarzan.

I've never seen any of the Bomba films, but I love old Hollywood backlot jungle adventures, and look forward to checking these out. This first volume contains six features: Bomba The Jungle Boy, Bomba on Panther Island, The Lost Volcano, The Hidden City, The Lion Hunters, and Elephant Stampede. With luck, I'll be reviewing these for my DVD Late Show site.
Posted by Christopher Mills at 5:43 PM 3 comments: 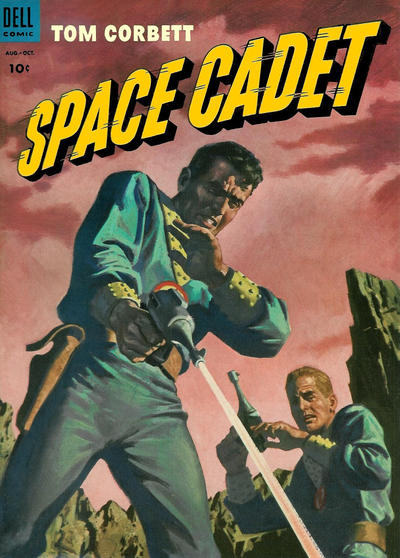 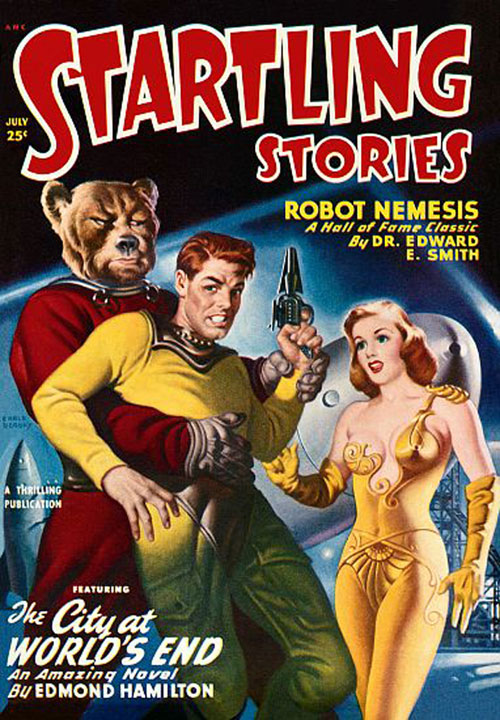 I can't read that signature... aside from the glorious space bear, I love the redhead's outfit.
Posted by Christopher Mills at 11:04 AM 2 comments:

Return Of The Late Show

After a couple of months laying fallow, the DVD Late Show review site roars back to life this week, with a slew of new articles - and a new Blu-ray Giveaway!

I don't really have a good excuse for the two month+ hiatus - it was mostly the result of seasonal depression and creative burnout, I think - but I'm back to work, and hope to both catch up with some of the genre DVDs and Blu-rays that have piled up on my desk and stay current with new releases.

Monday saw reviews of the new Shout! Factory/Scream Factory Blu-ray edition of Stuart Gordon's 80s horror classic From Beyond, and the Blue Underground DVD release of the 1972 Lee Van Cleef Spaghetti Western, The Grand Duel. Today, I plan to post reviews of Westworld and Gorgo on Blu-ray and the Warner Archive MOD release of the 1974 Wonder Woman television pilot, starring Cathy Lee Crosby as the star-spangled Amazon.

Also on the way are reviews of the Westworld sequel, Futureworld, recently released on Blu-ray, VCI Entertainment's two-volume Creepy Creature Double Features and Overtime, and more. Stay tuned!
Posted by Christopher Mills at 1:43 PM No comments: