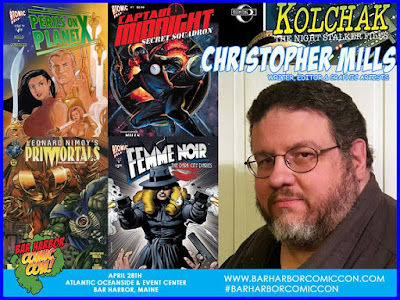 On April 28th, I'll be appearing at the second annual Bar Harbor Comic Con at the Atlantic Oceanside Hotel And Event Center in Bar Harbor, Maine, where I'm looking forward to seeing some of my old Alpha Productions cronies, as well as creator pals Jay Piscopo, Amanda Kahl, Mort Todd and Paul Pelletier, among others.

Last year's show was a blast - probably the best 1-day regional con I've ever attended! Looking forward to heading back downeast in a few weeks...
Posted by Christopher Mills at 5:00 AM No comments:

It's been a long time since I last updated this site. It's not because I haven't been working on things. I'm simply trying to not announce stuff that isn't complete or have a concrete print date anymore. Too many times I've announced projects that I was working on, only to never have them materialize.

I've written two Edgar Rice Burroughs-based comics for American Mythology Productions - Carson of Venus #1 and The Moon Maid #1. The two books make up the first two chapters in American Mythology's "Fear On Four Worlds" ERB crossover event (tying in with their existing Land That Time Forgot and Pellucidar books), and if sales warrant, they will be followed up by new miniseries. Carson is scheduled for June, and Moon Maid for July.

If you can, PLEASE pre-order these from your local comics shop - otherwise, they may not stock them. Diamond Order Code for Carson of Venus is APR181254 for the Main Cover and APR181255 for the Cyrus Mesarcia variant cover.

Hopefully, sales on these will justify American Mythology following them up with new miniseries. I hope so, because I'd really like to write them (and could use the work!). In particular, I've already got some great ideas (I think) for a Carson Of Venus miniseries...
Posted by Christopher Mills at 2:41 PM 1 comment: