Meanwhile, over at The Late Show...

It's that time again: another reminder that I also write regular reviews of cult, B-movie and genre DVD and Blu-Rays, and publish them over at my DVD Late Show website.

Coming up in the next couple of weeks: The Great Texas Dynamite Chase with Claudia Jennings, Georgia Peaches, Queen Of Blood, Tron Blu-Ray, Vanquisher, Larry Cohen's The Ambulance, The Terror Blu-Ray, Dixie Dynamite with Warren Oates & Christopher George, Daughters of Satan, starring Tom Selleck(!), Dementia 13 on Blu, and more. Check it out!
Posted by Christopher Mills at 12:00 AM No comments: 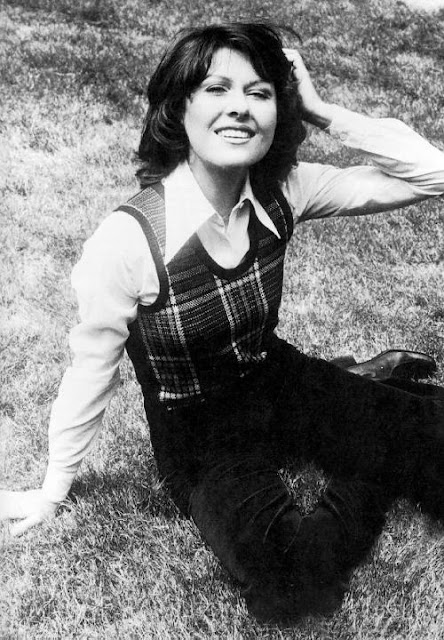 British actress Elisabeth Sladen, the real-world alter ego of plucky journalist Sarah Jane Smith, one of the best companions to renegade Time Lord known as The Doctor, has passed away at age 63 from cancer.

Sladen joined Doctor Who in the 1973 serial, "The Time Warrior," as the new companion of the Third Doctor, played by John Pertwee. She stayed in that role for three years, tagging along as the Third Doctor became the Fourth (Tom Baker). So beloved by fans - and producers - of Doctor Who, she returned to the franchise numerous times: first in the 1981 spin-off "pilot," K-9 & Company, and then in the same year's anniversary special, The Five Doctors. In 2006, she returned to the revived series in the acclaimed "School Reunion" episode, which led to the BBC green lighting her own show, The Sarah Jane Adventures. She was shooting the fifth season of that series when she passed away.

I'm pretty sure that the first full episode of Doctor Who I ever saw was "Robot," on PBS back when I was in art school, around 1983 or 84. Sladen co-starred with Tom Baker in that story, and I think I fell in love with her right then and there. Sarah Jane Smith is still my favorite Doctor Who "companion," and proved herself a formidable heroine in her own right. Smart, brave, cute-as-a-button and prickly as a cactus, Sarah Jane - and by extension, the actress who portrayed her so well - was my kind of woman.

Rest in Peace, Ms. Sladen... and so long, Sarah Jane - the finest companion a time traveler could ever hope for.

In Brightest Day, In Blackest Night...


There are at least four comic book-based super-hero movies coming out this Summer: Thor, X-Men: First Class, Captain America: The First Avenger, and Green Lantern. While I'm not particularly interested in the X-Men prequel, I am looking forward to Thor and Captain America; they look pretty good.

The one I'm really eager to see, though, is Green Lantern.

I've always loved Green Lantern. The costume, the magic ring, the space opera elements -- especially the space opera elements -- the "Silver Age" Green Lantern is just such a cool character/concept. And while I was definitely enthused about the character getting a live-action feature film, I was initially a bit wary. But this new footage not only assuages my fears, but genuinely excites me. It's almost exactly what I think a Green Lantern movie should be. I think Ryan Reynolds brings just the right fighter pilot "Top Gun" cockiness to Hal Jordan, and I love the realization of Oa, the ring, and the major Green Lantern Corps characters like Abin Sur, Sinestro, Tomar Re and Kilowog. I was a bit skeptical about the design of the lantern power battery and the CGI-costume when I first saw the stills, but I love how they look on film. Lantern's uniform is supposed to bea  construct of the ring, after all...

And... when Reynolds recited the Green Lantern oath... I don't mind telling you: I got misty, brother.

I think I'll actually have to go to the theater for this one, after all.
Posted by Christopher Mills at 3:26 AM 1 comment: