Okay, here's a question for the readers of this blog - and the Gravedigger crime comics that I produce with Rick Burchett. If was to publish a short Gravedigger novel or novella through Amazon, would anyone buy it?

I'm not saying I'm even able to do it - I've never written a prose work longer than a short story - but I have about 4,000 words of a Digger story that I might be able to expand.... read an excerpt below and let me know what you think. (I've written more pages than this, by the way. And I ran this excerpt here on the blog some years ago in a slightly different form. If it sounds familiar, that's why.)

When the door burst open, I put two 9mm slugs into the first man's chest. The guy behind him looked vaguely familiar, but I didn't have time to take a second look as he raised an ugly, efficient-looking machine pistol and sprayed the room with hot metal.

The slugs didn't come anywhere near me, but they ripped the hell out of the small rented cabin. I waited on the floor behind the threadbare sofa, Beretta in my right hand, and when the guy with the squirtgun emptied his magazine, I shot him in the head.

I sidled carefully over to the two bodies and looked out through the open door and across the porch at the glass-smooth lake. Pale moonlight and flickering stars were reflected in its mirrored surface, and an aluminum rowboat I hadn't seen before was tied to the short dock.

I had no concerns about the gunfire. The nearest neighboring cabin was a good half-mile away, and was, at present, unoccupied.

I pulled the bodies into the room where I could see them clearly. I had been right about the second man; I knew him. His name was Wyatt, a burly, blond Australian ex-pat I'd worked with a couple years back on a payroll job in Nevada. The other gunman was unfamiliar; a blue jean and tee-shirt wearing kid, maybe twenty-five, with short, spiky black hair and a bad complexion.

I searched their pockets. Wyatt carried I.D. in the form of a Jersey driver's license and a Visa card that said his name was Porter. The younger man had apparently been going under the name of Joe Riley. I took their I.D. and credit cards and slipped them into my shirt pocket.

I wondered how they'd found me.

I'd been living in the two-room cabin in western Maine for three weeks. Not hiding out, exactly; just resting and recreating between jobs. Once a week, I took the rented outboard across the lake, hiked a mile and a half to the clearing where I’d left my Buick, and drove another few miles on mostly dirt roads into Rangely for supplies. The rest of the time, I sat on the porch, enjoying the solitude, smoking, and reading trash paperbacks, a habit I'd picked up during my one extended stay as a guest of the state.

I didn't think I was currently on anyone's shit list, but in my business you can never know for sure. Emotions often run hot when large amounts of cash are on the line, and those who make their living acquiring it at gunpoint tend not to be overly sensitive to other people's feelings.

I tried to think who might be carrying a grudge and who also knew Wyatt. The list was short.

Of course, he was supposed to be dead.

Posted by Christopher Mills at 4:54 AM No comments: 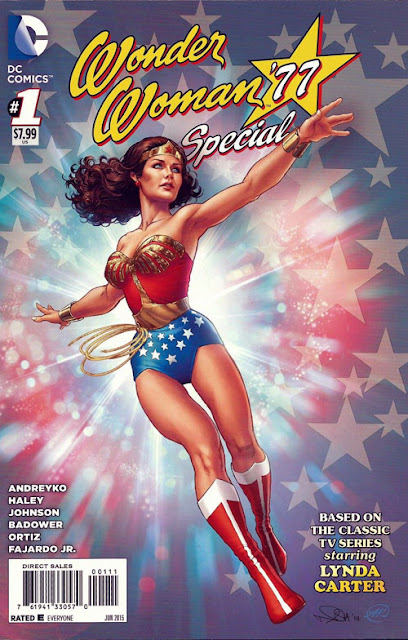 Considering DC Comics' recent-ish success with their Batman '66 comics, which presented new adventures of the mid-Sixties Adam West & Burt Ward television versions of Batman & Robin, it was inevitable that they'd try a Wonder Woman comic based on the Seventies TV show that starred the stunning Lynda Carter as the star-spangled heroine. Originally serialized online, the publisher has recently collected a couple of the period adventures as the Wonder Woman '77 Special!

As a fan of the 70s Wonder Woman series, I felt I had to pick this up when I saw it at a local store, despite the hefty cover price. It was a fun read, although I felt the writers and artists did an only "adequate" job evoking the TV series.  In fact, reading it, I got the impression that no one involved actually was alive in the 70s! 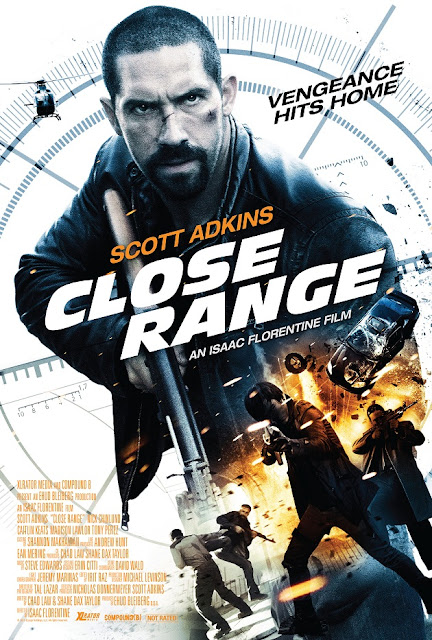 Florentine (a former Power Rangers director!) is probably the best action director working in the indie action realm, and his previous films with Adkins have been so much better than they had any right to be. These two make a fantastic team, consistently raising the bar of what can be accomplished on low-budget, direct-to-video genre fare.

Close Range looks like another winner; check out the trailer below.

Posted by Christopher Mills at 2:02 PM No comments: 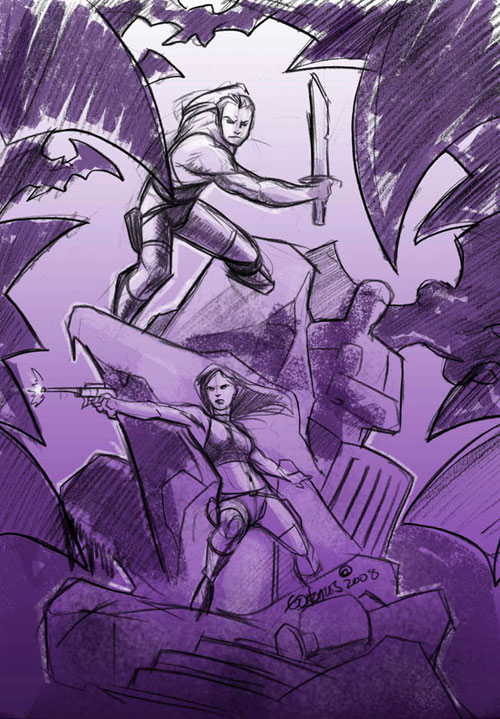 It's been nearly a year since Gene Gonzales and I wrapped up our (first?) Perils On Planet X adventure. This Fall, I'm hoping we'll formulate a practical plan for getting a print edition published. Until then, it remains complete and free to read online.

As the dog days of Summer close upon us, maybe it's a good time to re-read (or read for the first time!) the entire Perils On Planet X "Hawke of Terra" saga... from the beginning!
Posted by Christopher Mills at 2:31 AM No comments: