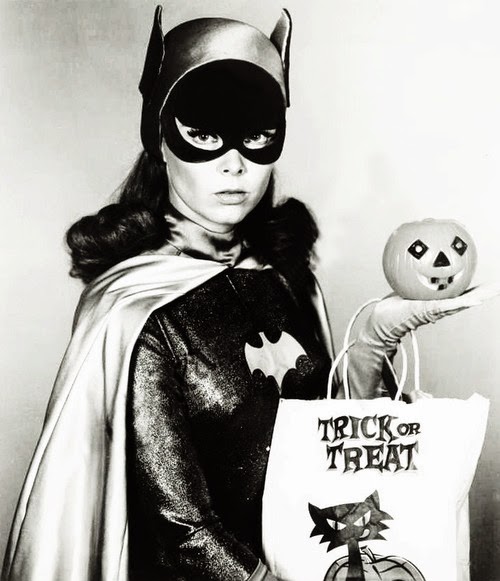 Halloween is my favorite holiday. Candy, monsters, candy, ghosts, candy, bats (of all kinds) and no uncomfortable family dinners. It also happens to be my wedding anniversary - this year marks fourteen years of marriage to my own Batgirl, Brandi. I'm a very lucky guy. With her in my life, it's tricks and treats all year 'round!

Here's wishing you and yours a truly spooktacular celebration!
Posted by Christopher Mills at 12:00 AM 1 comment: 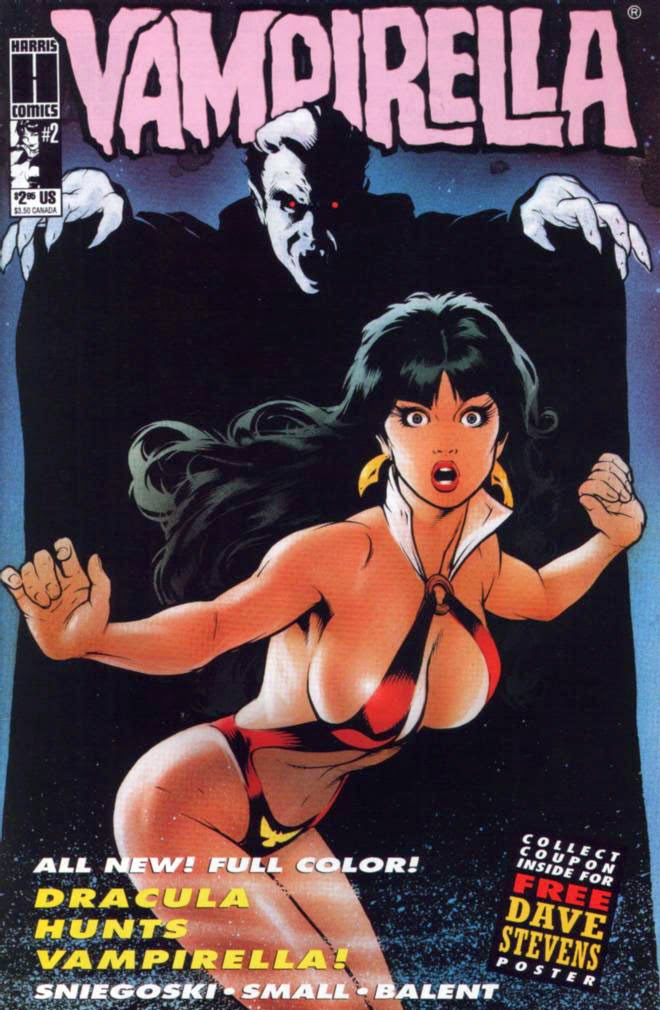 And... here's the second Adam Hughes cover for Harris Comics' 1992 revival of the Warren classic, Vampirella. Nobody drew sexier women in the 90s than Hughes.

You know, I think I bought a tee-shirt with this image on it.
Posted by Christopher Mills at 12:00 AM No comments: 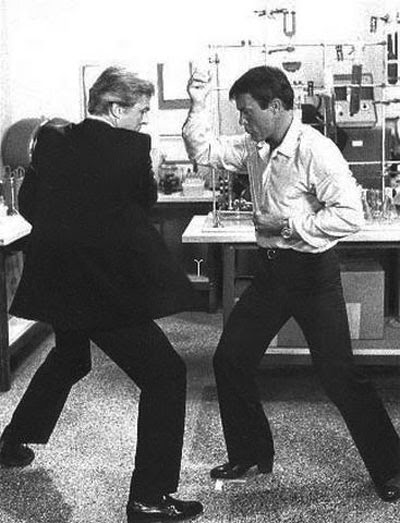 In the second episode (airing September 29, 1979) of NBC's A Man Called Sloane (although, from the amount of footage in this episode that is incorporated into the series titles, it was probably shot first), "The Seduction Squad," Sloane and Torque are investigating acts of industrial sabotage that threaten the country's defense contractors. Eventually, it turns out that important industrial and military figures have been seduced and hypnotically brainwashed by the supermodel operatives of a slightly fey fashion and cosmetics king played by I Spy's Robert Culp. His goal? War in the Middle East... though I'm still not exactly sure what he expected to get out of it.

Not a lot to discuss here. Sloane and Torque go through the usual motions, and aside from an action-packed opening scene featuring Sybil Danning, explosions and a great zipwire stunt, it's not a particularly involving episode. The women of the titular Squad are all pretty hot, though, big hair and all, and Culp's clearly having a hell of a good time, camping it up as the heavy. He and Conrad - or, more precisely, their stunt doubles - do get a little hand-to-hand combat in near the climax, though.

• Anthony Eisley, star of one of my favorite Eurospy flicks, Lightning Bolt, and Robert Conrad's co-star on Hawaiian Eye, shows up here as a Defense Department bigwig who is brainwashed into nearly starting WWIII.
Posted by Christopher Mills at 12:00 AM No comments: 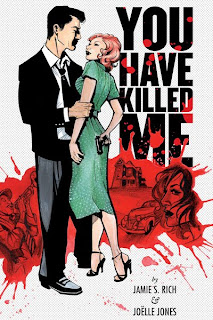 Modern authors who attempt period private eye stories often end up turning out pale pastiche or unintentional parody. Or their stories are so heavily infused with the author's historical research that they read dry and artificial. What is often forgotten is that the private eye mystery - regardless of period - revolves around character more than plot. This is different from most other sub-genres of mystery fiction, where plot is all; a puzzle to be solved. In a P.I. story, it's all about people; their secrets, their motives, their passions.

Jamie Rich and Joelle Jones' You Have Killed Me is a private eye tale that remembers that, and is filled with deftly-drawn (in all senses of the word), richly-developed characters.

Private investigator Antonio Mercer is hired to find an old flame, a high society gal from his past, who has gone missing on the eve of her wedding to a down-on-his-luck gambler. It's no surprise that Mercer's investigation leads through smoky jazz clubs and dark back alleys, to various and sundry unsavory individuals, nor that it ultimately becomes very personal for our protagonist.

Rich's script is sharp, with terse dialogue and narrative captions that don't fall into the trap of trying to emulate Chandler's distinctive - and easily parodied - flair for simile. Instead, the first-person captions are employed sparsely and used to provide a bit of insight into Mercer's private worldview. The story treads very familiar ground, but that's okay - while familiar, it is feels fresh and is skillfully constructed.

Jones' art is clean and well-composed. Backgrounds are occasionally sketchy, but the characters are all distinctive and expressive, and her storytelling is clear and cinematic. Overall, it's beautiful stuff.

Oni Press has done a really nice job on the production of the book, with striking, attractive graphic design and high-quality paper and binding. It's a truly gorgeous book.

You Have Killed Me is an excellent period P.I. tale, extremely well told. Highly recommended.

Six Out of Six Bullets.
Posted by Christopher Mills at 12:00 AM No comments: 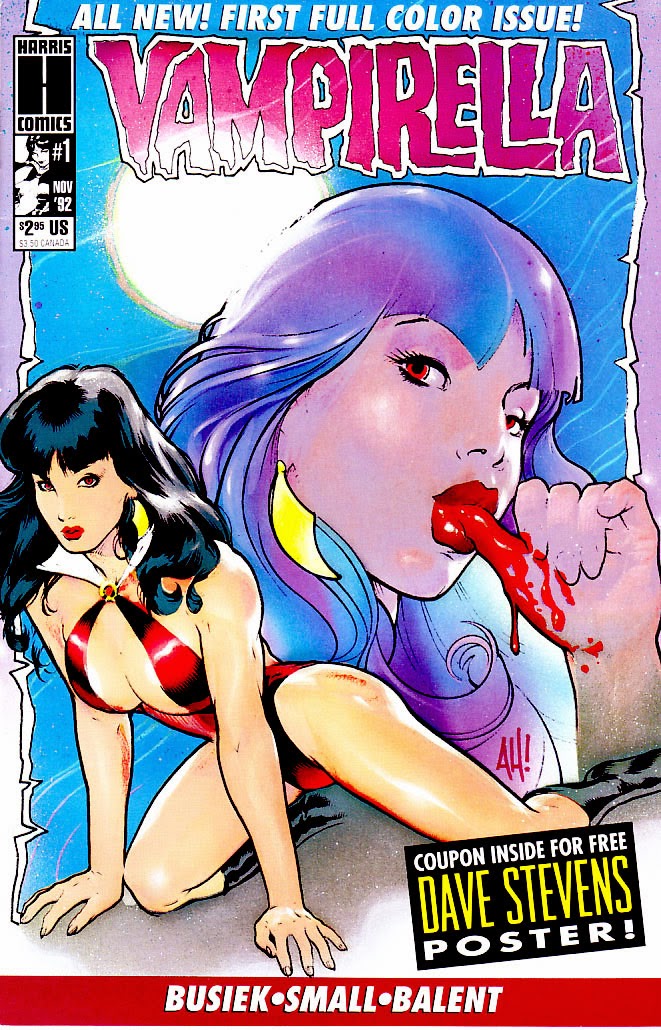 Back in 1992, Harris Comics revived the classic "Good Ghoul" character Vampirella, with a new, full-color series that was a far cry in style and tone from the legendary B&W Warren magazine originals. And of course, since it was 1992, who better to render the covers than the hottest "hot chick" artist of the time, Adam Hughes?

I admit it. I bought it because of the cover, too.
Posted by Christopher Mills at 12:00 AM No comments:

A MAN CALLED SLOANE: "Night Of The Wizard" 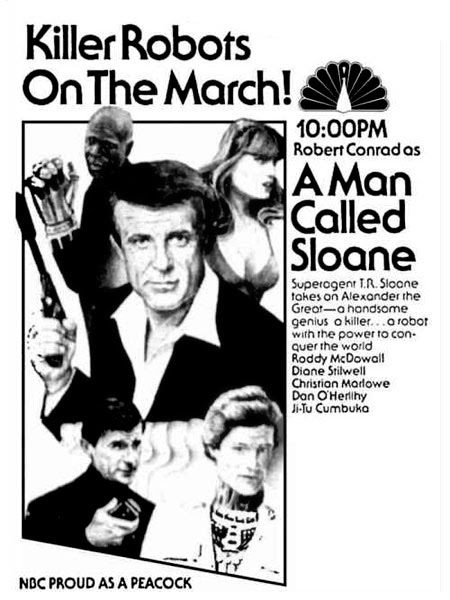 In the debut episode of A Man Called Sloane (airing September 22, 1979), top level UNIT agent Thomas Remington Sloane (Robert Conrad) and his partner Torque (Ji-Tu Cumbuka), a giant of a man with a huge, mechanical hand, are investigating the thefts of "K3" plutonium pellets from the U.S. government.

As it turns out, the thefts have been arranged by Manfred Baranoff (the always great Roddy McDowall), a mad scientist building a private army of super-strong androids. Posing as a mercenary thief with irradiated K3 pellets to sell, Sloane attempts to infiltrate Baranoff's organization, only to have his cover immediately blown. Needless to say, agent Sloane is captured, and locked in a rather nice bedroom sealed with deadly electrical force fields. With the help of pretty Sara Nightingale (Diane Stilwell), an artist employed by Baranoff to sculpt his android's faces, Sloane escapes from his prison.

In a nice twist, Sloane discovers Baranoff's body lying on the floor of a now-empty laboratory – the scientist has been murdered by one of his own creations, a "perfect" android named Alexander (Chris Marlowe). Alexander takes command of the other 'droids, and plans an assault on a scientific laboratory, where he plans to secure enough radioactive material to power himself and his army forever.

It's a fun little bit of Seventies spy-fi fluff, with a nicely layered performance – as usual – from McDowall. There are a couple of decent fight scenes, with Conrad actually involved in the action. Unlike on The Wild Wild West, where the athletic star insisted on doing all his own stunts, on Sloane, the mercurial Conrad wasn't always as enthusiastic, and frequently let his doubles do the sweating.

The only spy gadget in this episode worth mentioning is a two-way radio hidden within a rather ostentatious money clip. And, as will frequently happen over the dozen episodes, Sloane's towering, cyborg sidekick Torque has little-to-nothing to do in this installment.

Probably because I grew up as a science fiction fan in the Seventies (i.e. "The Roger Moore 007 Years"), I find that I am very fond of the more sci-fi spy-fi; androids and death rays are so much more exotic (and fun) McGuffins than dreary old "secret documents" or mundane nuclear warheads. I love the more down-to-earth, realistic spy stories, too, but I'm not a snob.

• The title of this Sloane episode is reminiscent of the episode titles on The Wild Wild West, which all began with the words "The Night of...," and specifically, the title of the first Dr. Loveless episode, "The Night The Little Wizard Shook the World." Coincidence?
Posted by Christopher Mills at 12:00 AM No comments: 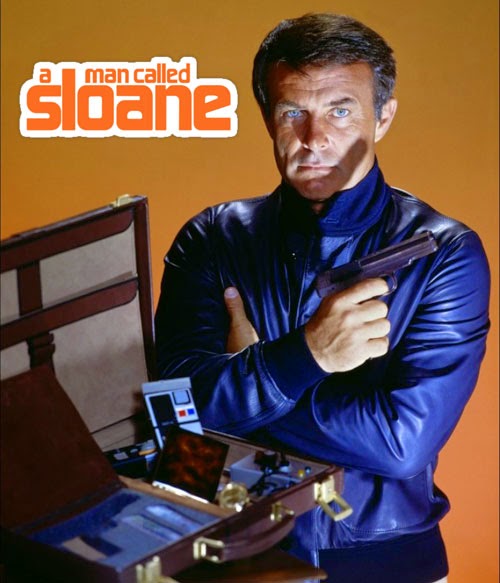 Look for the first Sloane review on Monday.
Posted by Christopher Mills at 2:59 PM 5 comments: