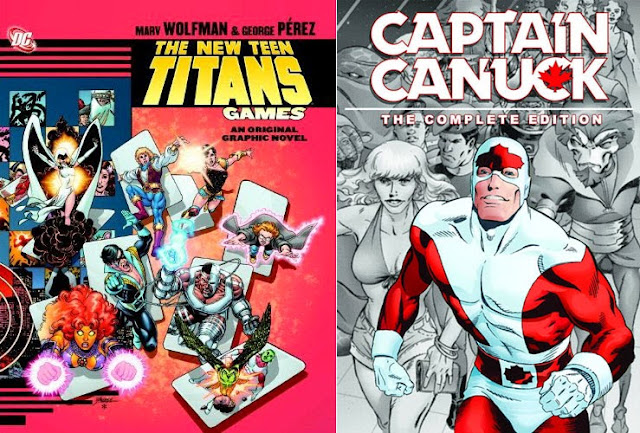 Yesterday, I ordered two new books from Amazon, using a portion of a recent freelance check. Both titles harken back to my personal "Golden Age" of comics in the early 80s: the long-awaited Marv Wolfman/George Perez New Teen Titans graphic novel, "Games," and The Complete Captain Canuck - a favorite series from my youth, collected in paperback with gorgeous art by George Freeman.

The New Teen Titans was probably the first superhero comic that I made a point of following on a monthly basis, starting with the third or fourth issue. It was also the title I collected for the longest time: I bought it - and its spin-off titles/annuals/specials - every month for more than ten years. This graphic novel was originally announced back in the late 80s, if I recall correctly - so it's been a long while coming.

Captain Canuck was an oddity; a Canadian-produced comic about a Canadian super-hero, that somehow got distribution to local newsstands here in Maine. In fact, I bought my earliest issues of Canuck at the same convenience store where I discovered the Titans. I discovered Canuck with its fifth or sixth issue, and eventually tracked down and collected all but two issues of the run. This trade has them all, including the unpublished final issue. It was an offbeat, cool comic combining super-hero, sci-fi and spy elements, and I loved the art by George Freeman. I'm looking forward to having the collection on my shelves.

With luck, these will show up in my mailbox soon after New Years.
Posted by Christopher Mills at 1:32 AM 4 comments: 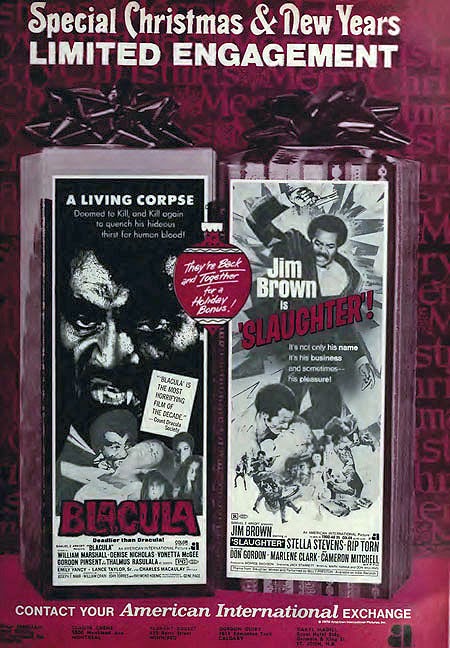 Ahh... those marketing geniuses at American-International Pictures. Because nothing says "Happy Holidays" like a Blaxploitation double feature of Blacula and Slaughter! Actually.... hmmmm.... now that I think about it --
Posted by Christopher Mills at 8:00 AM No comments: 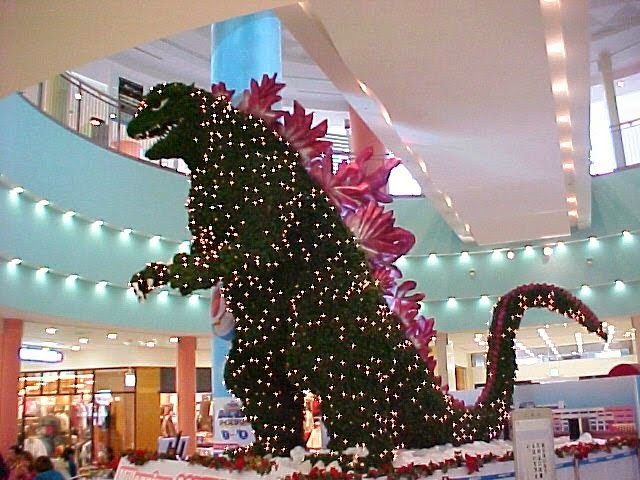 Posted by Christopher Mills at 5:29 PM No comments:

Email ThisBlogThis!Share to TwitterShare to FacebookShare to Pinterest
Labels: GODZILLA

The Falcon Has Landed 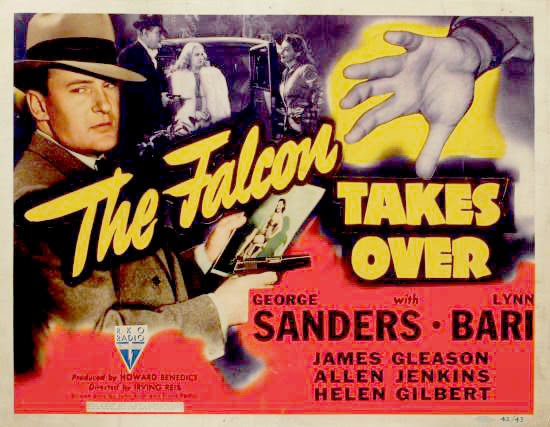 Today I received the Falcon Mystery Movie Collection, Vol. 1, from Warner Archives, containing the first seven films in RKO's "Falcon" series. The films - which starred George Sanders and then his real-life brother, Tom Conway - are tight little B-mysteries in the vein of the studio's "Saint" programmers.

I guess I know what my next seven midnight movies are going to be...
Posted by Christopher Mills at 4:25 PM 3 comments: 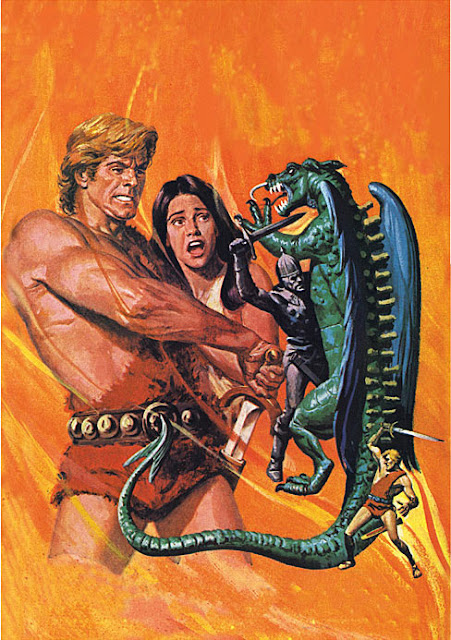 Thanks to my generous mother-in-law and her holiday largesse, I was able to order myself a copy of the Dagar The Invincible Archives Vol. 1, featuring stories by writer Don Glut and artist Jesse Santos. Should be here sometime next week.

This artwork originally graced the sixth issue of Gold Key Comics' Dagar the Invincible/Tales Of Swords & Sorcery, back in 1974, and Dark Horse Comics used it for the cover of their hardcover archive edition. Unfortunately, the Grand Comic Book Database doesn't identify the artist.
Posted by Christopher Mills at 12:20 AM 3 comments:

For a number of reasons, neither my wife nor myself are really feeling the holiday spirit this season. In fact, less than a week to go before Christmas, and we have no tree, nor have we put up any decorations - the first time in the twelve years that we've been together that we haven't had either around the house.

It's not even a "Bah, Humbug," situation. Neither of us has any particularly negative feelings towards the holidays; we just don't feel like participating in the yuletide celebrations this year.

Frankly, it hasn't been a particularly great year, and although we've had as bad or even worse ones in recent memory, I think we're just feeling run down and worn out. I know that we're both really missing China - her passing has left a huge hole in our lives, and we've been having a hard time dealing with it. Money is tight - as usual - and there are a lot of things around here that need replacing or repair. And, as for myself, I really wish more of my friends actually lived close enough for me to hang out with them once in a while. I miss socializing with folks.

Oh well. I suspect that it's going to be a rough winter for us, but we'll get through it....
Posted by Christopher Mills at 3:37 AM 4 comments: 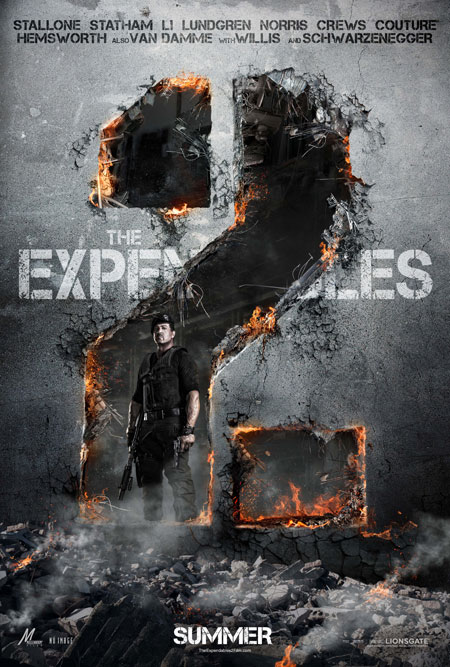 I don't care how stupid you thought it was, but I loved The Expendables (and even bought and watched the extended cut on Blu-ray this week). It reminded me of weekends in my twenties when I was living in Bath, Maine next door to my pal Mark Gerardi. Almost every Saturday, we would get together, rent a big stack of action movies on VHS, grab some food, and hang out all afternoon, watching the movies of Stallone, Schwarzenegger, Van Damme...  It's because of these fond memories - at least, in large part - that I loved The Expendables, and I suspect I'm going to love the sequel even more.


What can I say? Dumb action films are my recreational drug of choice...
Posted by Christopher Mills at 4:02 PM 1 comment: 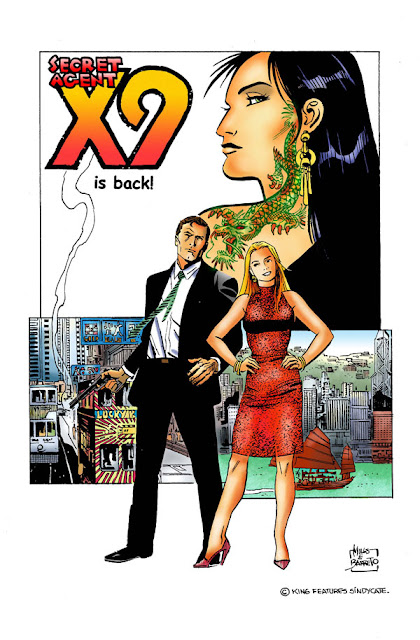 I am stunned today by the sad news of the passing of my friend and colleague Eduardo Barreto. I had the great pleasure and privilege of working with him on Mickey Spillane's Mike Danger in the mid-90s as his editor, and, for the past few years, we had been collaborating on a planned Sinbad graphic novel - an exciting project that, sadly, will never see completion now. We were also putting together a proposal for King Features to revive Secret Agent X-9 as a daily & Sunday comic strip. With the current sad state of newspaper publishing, Eduardo knew it was a longshot when he asked me to write X-9 for his pitch, but he very much wanted to get back on the comics page - and we both loved the character.

My heartfelt condolences to his family and friends. All of us who knew him will remember him fondly, and all admirers of his work - and they are legion - will never forget his talent and superb storytelling skills. 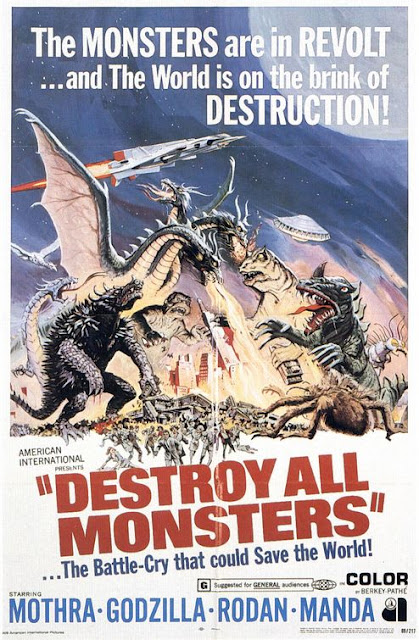 of the 1968 Toho kaiju klassic, Destroy All Monsters, showed up in the mail today! It's a great package, far superior in every way to the DVD that came out from ADV Films back in 2000.

Not only is the HD widescreen transfer significantly better-looking, it also includes, in addition to the awful, "International" English dub, both the original Japanese language track (my preferred way of enjoying these films) and the far superior English dub prepared by American-International/Titra Productions for the original U.S. theatrical release. It seems to have been taken from an old tape source, and there's a little distortion here and there, but it's very welcome. Another cool bonus is the 7-minute Castle Films Super-8 "condensed" version of Destroy All Monsters!

Look for a full review at DVD Late Show in a few days. This new edition is also available on standard DVD. 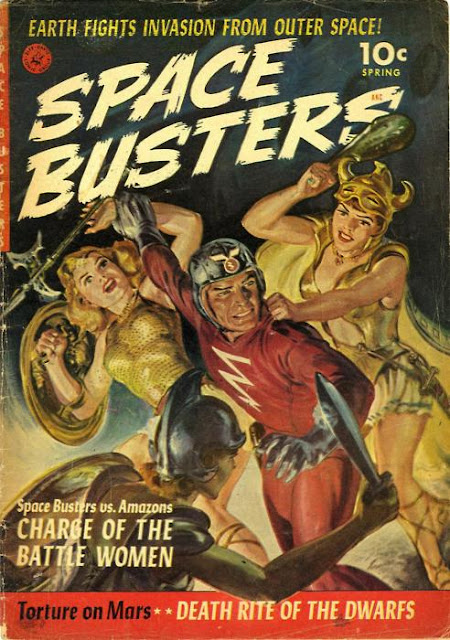 I know nothing at all about this magazine or this cover, except that I friggin' love it.
Posted by Christopher Mills at 1:53 AM 2 comments:

First, I had a problem with hackers planting malicious code in one of my web accounts, which, because I hosted images for all of my sites on that server, affected all of my sites. It took about a month to clear that mess up, and then, soon thereafter, I was hit with the loss of my beloved dog (which I wrote about here a few days ago), and couldn't manage to accomplish much of anything for a few weeks. I certainly wasn't up to writing any DVD reviews.

But the discs kept piling up - and that pile was starting to get pretty intimidating.

Last week I managed to get two articles posted to DVD Late Show, and I just posted two more today. My intent is to get at least four or five more reviews posted to the site before the weekend. If you haven't been over there in a while, here's a list of some of my most recent DVD & Blu-ray reviews: The Incredible Melting Man, Master Of The World, Frankenhooker (on Blu-ray), Don't Be Afraid Of The Dark, Scream 4 (on Blu & DVD), Dark Angel (a/k/a I Come In Peace), More Brains!, Lucio Fulci's Zombie (on Blu), Wild Wild Planet, Horror Express (Blu & DVD), Enter The Ninja, and Tucker & Dale VS Evil!

I hope you'll swing by the site and check them out. Thanks!
Posted by Christopher Mills at 5:08 AM No comments: 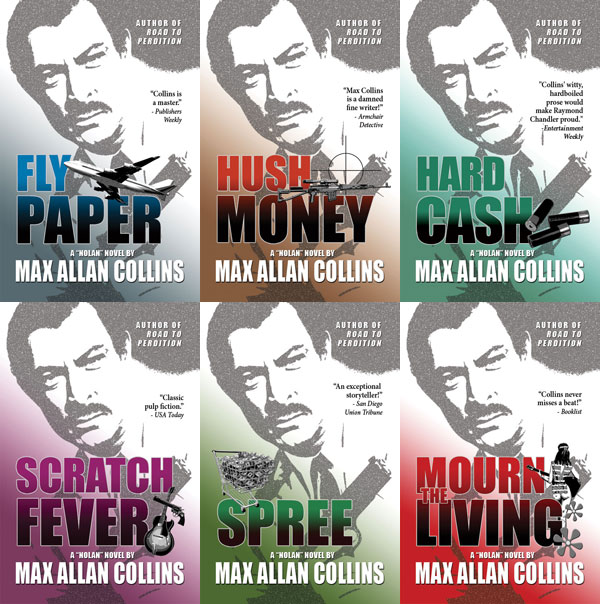 Max Allan Collins has been one of my favorite crime fiction authors since I first discovered his work around 1983. I was a fan of his comic book series Ms. Tree (with artist Terry Beatty), and, once I stumbled across a paperback copy of his novel Blood Money in a Dover, New Jersey thrift store, I was a die-hard fan of his novels as well.

Around 1991, I finally had the opportunity to work with him – first when he contributed stories to comics and magazines that I edited for a small company called Alpha Productions, and then again a couple years later, when I went to work for Tekno*Comix in Boca Raton, Florida. It was there that I had the great privilege of working with both Max and Mickey Spillane as editor of their Mickey Spillane’s Mike Danger comic book series.

Over the ensuing years, Max and I have stayed in touch off and on, and about a month or so ago, he contacted me to see if I would be interested in designing some covers for new editions of his out of print “Nolan” crime novels, scheduled to be published by Perfect Crime Books. These books, which chronicle the exploits of an aging professional thief and his youthful, comic-fan sidekick, are among my favorites of Max’s many works, so I was thrilled by the offer.

I’ve just sent off the final print files to publisher John Boland, and, with his kind permission, thought I’d share them here. Presumably, these books will be available for purchase sometime in 2012.

I really enjoy doing this kind of design work, and will be working on some covers for my pal James Chambers next.
Posted by Christopher Mills at 12:38 AM 4 comments: