Jongor Of Lost Land Fights Back 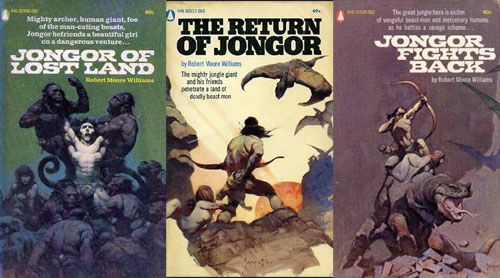 Years ago, when I first read Richard Lupoff's book, Edgar Rice Burroughs, Master of Adventure, I found myself not only determined to read every ERB story I could find, but also intrigued by the Burroughs "imitators" that Lupoff discussed in one of the later chapters. Among those imitators, I remember Lupoff writing about Robert Moore Williams and his Tarzan-esque character, "Jongor."

The Jongor stories appeared in the pulp magazine Fantastic Adventures, back in the 1940s, and were reprinted in three paperbacks by Popular Library in 1970, graced with a triptych of evocative Frank Frazetta covers. I found the second of these, The Return of Jongor in a used bookstore a few years ago, but, as I recently noted here, I dislike reading series fiction out of order, so it remains unread.

While on my online book safari last week, the one where I found and purchased Star Barbarian, I decided to see if I could find the other two Jongor books at affordable prices. As it turned out, I could, so, in a few weeks, I'll have more vintage jungle pulp to add to my reading pile.

It looks like Moore also wrote some sword & planet novels about a character called "Zanthar." If I enjoy the Jongor books as much as I hope to, maybe I'll try and track down those adventures, as well.
Posted by Christopher Mills at 1:58 AM

Email ThisBlogThis!Share to TwitterShare to FacebookShare to Pinterest
Labels: Sword and Sorcery, Tarzan

I didn't know about the Zanthar. I've got to find that. I've got two JOngor, haven't read them. Don't have Jongor of lost land

I've read one of the Jongor books, but it was almost 40 years ago so I don't remember which one. Thought it was the original, but the only book cover that really looks familiar is the one for Jongor Fights Back.

And like you, I went looking for Jongor after reading Edgar Rice Burroughs, Master of Adventure.