I'm currently planning a line of action-adventure comics featuring my own versions of some old, public domain comic book heroes. My goal is to take characters from the 1940s and re-invent them in a 1970s-1980s style -- which was my favorite era of comics.
I've been struggling in the comic industry with limited success for 30 years or so, and now I just want to make the kind of comics I loved as a kid. So I'm doing it - and self-publishing under the Atomic Pulp imprint.
The first of these titles is SPACE CRUSADERS™, which I've talked about a lot (for a lot of years) and is pretty well along. The first issue features "Rex Dexter of Mars," created by Dick Briefer, with art by Peter Grau. Issue #2 features "Star Pirate" from PLANET COMICS, drawn by my Femme Noir co-creator, Joe Staton. I'm hoping to do a third issue with Basil Wolverton's "Spacehawk."
The second title - which I expect to be a one-shot - is SLEUTH COMICS™, featuring the "Black Owl" from PRIZE COMICS. Too early to announce the artist yet, but the guy I'm talking to is a great talent and would be a terrific choice for this. Fingers crossed.
The third (also a one-shot and the final one planned for now) is SAVAGE SAGAS™, featuring the very first comic book barbarian hero - Gardner Fox's "Crom The Barbarian!" The artist on this will be my Gravedigger collaborator, the great Rick Burchett, with a cover by former Savage Sword of Conan artist, my old Shadow House partner-in-crime, Fred Harper. This will also include a back-up story featuring Fox's "Cave Girl," illustrated by Neil Vokes!
These titles will be all-ages in the way that mainstream comics used to be. No swearing, no nudity, with PG violence. You'll be able to recognize them right away from the retro trade dress and the "Atomic Action" stamp of approval. 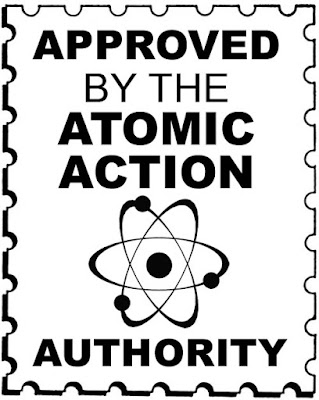 When will these books come out? Not for a while. But I'm hoping to have all of them written over the Summer and in production by the Fall.
And keep an eye out, because I'll probably be running Kickstarter campaigns for each of these titles, beginning in a couple of months. So, if you're a fan of my work, or these are the kinds of comics you want to read, you'll have an opportunity to help make 'em a reality. In fact, I need pretty every fan of my work to help back these, or they'll probably never see the light of day.
Stay tuned...
Posted by Christopher Mills at 10:51 PM