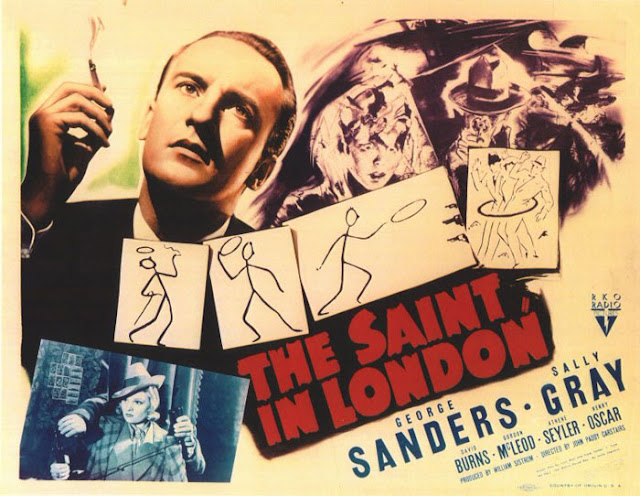 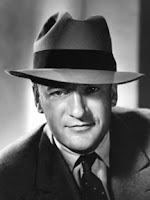 I just received the George Sanders Saint Movie Collection from Warners Archive. The two-disc, manufactured-to-order DVD set includes all five of the Saint movies that George Sanders starred in for RKO - The Saint Strikes Back, The Saint In London, The Saint's Double Trouble, The Saint Takes Over and The Saint In Palm Springs (Louis Hayward and Hugh Sinclair also played Simon Templar in RKO films, but it's the five with Sanders that are the best-remembered.

These are not remastered or restored in any way. The source prints used for the transfers all show significant age-related wear and tear, but they're still pretty decent, and certainly watchable.

So far, I'm really enjoying them. I love these old hour-long B-mystery series detective flix, whether they feature Sherlock Holmes (the Universal series), Charlie Chan, Mike Shayne, Mr. Moto, or Mr. Wong, and these are right in there with those esteemed series. I had a copy of The Saint Strikes Back on VHS years ago (pictured at left), so I was pretty familiar with that one, but they're all a lot of fun. I particularly enjoyed The Saint's Double Trouble, in which Sanders plays both Templar and his criminal double, even though the great Bela Lugosi is terribly underused in the flick. Later tonight, I plan on checking out The Saint Takes Over.

I loved Roger Moore in the 60s Saint TV series, and liked Ian Ogilvy in the 70s revival, The Return Of The Saint (great theme music, too). But I'm beginning to think Sanders is my favorite Simon of all.

So, thanks, Warner Archive, for bringing these to DVD at last. Would it be too much to hope that The Falcon series might be on the way? Or am I being greedy?
Posted by Christopher Mills at 2:00 AM