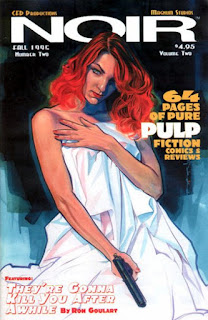 Paul Bishop was asking about this early project of mine over on his blog yesterday. The story behind the magazine that I created, edited and art directed (and did production on, and typeset, etc.) back in the mid-Nineties, NOIR: The Illustrated Crime Fiction Quarterly, is pretty convoluted and after a decade-and-a-half or more, I'm not sure I remember it all.

At the time that I first conceived of the magazine, I was working for a small indie comics publishing outfit called Alpha Productions. I had persuaded the guys – particularly publisher Leni Gronros – to take a chance on another pet project, a private eye comics anthology called The Detectives, and it had sold fairly well, especially by our standards. This bought me a little goodwill, I guess, and when I suggested to Leni another hare-brained idea of mine – a comic-book sized "pulp" magazine containing illustrated crime fiction and hardboiled comic stories – he agreed to give it a shot.

Now, the basic idea came from a couple of sources. In the early 90's I had sold a short story to a local horror zine called Fang. The editors of that publication came up with a format that combined short horror fiction with some pretty crude horror comics. Their mag was pretty rough and amateurish, but I thought the format had potential. I believed that it might work as well – or better, I hoped – with hardboiled crime stuff. 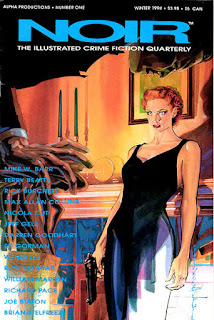 Secondly, you have to remember that at the time, crime comics seemed like they could really become a genre to be reckoned with. Frank Miller's first few Sin City miniseries had come out and done well, Brian Bendis was doing his early crime stuff at Caliber (A.K.A. Goldfish and Jinx), and other publishers were starting to dip their toes in that pool. I saw NOIR as both a modern-day pulp magazine, with strong prose stories by professional crime fiction writers, and also as a way to spread the gospel of crime comics. I thought I might be able to get readers of Sin City exposed to some notable authors, and show fans of crime novels that comics could be fun, too...

Mostly though, it looked like an opportunity to create the kind of publication I had always personally wanted to read.

It's been more than fifteen years now, so my memories are fuzzy. I don't really recall how I pulled the first, 48-page issue together. But I contacted a number of crime writers that I was a fan of and comics artists I knew, and somehow sold a bunch of them on the project. I tried to make clear to everyone that I would only be able to pay them if the magazine actually made money – but my informal way of handling this subject came back to bite me later.

The first issue sported a gorgeous cover painting by artist Brian Stelfreeze, who was quite "hot" at the time. My contributors were fairly evenly split between the crime fiction and comics community: Mike W. Barr contributed a prose story version of his comic book series MAZE Agency, and Max Allan Collins offered me an early story of his (a reprint), which was illustrated by my future Gravedigger partner, Rick Burchett. The issue also featured a brand-new Michael Mauser comic by Nicola Cuti and Joe Staton. Other contributors in that first issue were Wendi Lee, Ed Gorman, William Marden, Jeff Gelb, Darren Goodhart, Terry Beatty and Rick Magyar.

That first issue came out just before I took a new job with Tekno•Comix in Florida. I never got an accounting on the sales, though I believe (and I may be misremembering it) I was told that it had just barely broke even. 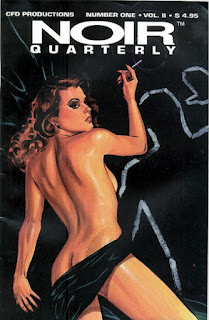 After leaving Alpha Productions, I wasn't sure if I wanted to continue the magazine. I had a new job, and a new home to settle into. And, frankly, for reasons I never truly understood, my friendship with the Alpha guys suddenly seemed to disintegrate. But – I really thought the concept had potential to grow, and when I was introduced to Joe Monks – who published horror comics under the CFD imprint – I pitched him the magazine. We did two issues together, and once again, I seemed unable to get an accounting beyond "it lost money."

So, I made one more attempt with Gary Reed's Caliber Comics. They were already publishing several fairly successful crime projects – the aforementioned Bendis books, as well as Dominique and Nowheresville, among others – and it seemed like a good fit with their line. I got a really beautiful cover from Dan Brereton, a story from the late Michael Collins (Dennis Lynds), a great, new Joe Hannibal story from Wayne Dundee, another new Mauser story from Nick and Joe, and a bunch of other cool stuff and the issue was solicited.

Sadly, it never came out.

Reason number one was that, since I'd never been paid for the first three issues, I had been unable to pay any of the contributors to those issues. Most people took it well, and were very understanding, but others... well, a couple of the bigger-name authors were very angry and abusive, and threatened to blacken my name in the mystery community. One of the comic artists (not one of the pros) actually sued me; in scraping up the money to pay him off, I was unable to pay other bills, lost my phone for a while, and ended up in a hole that took me months to climb out of.

The new issue didn't look like it was going to be any more profitable – the publisher said the orders were enough for them to print it, but that it would be lucky to break even – and I didn't want to be stuck owing even more contributors money.

The second reason was that my employers at Tekno saw the magazine in Previews and threatened to fire me. I did not have a written contract with the company forbidding me to work with other publishers (although they tried to get me to sign one retroactively), but they decided that I was directly competing with them (since they then owned Mystery Scene magazine), and accused me of using their company's resources on my project. Actually, there they had a point – I had used the office copy machine and scanner. I am frequently an idiot.

Anyway, I promised not to publish the magazine, and saved my job for a while.

I do wish that I had been able to continue the magazine at Caliber – cross-promoting it in their other crime comics titles might have helped. And if I could have kept it around for a while – and actually met my way-too-optimistic "quarterly" publication goal – it might have built a following and eventually made money. But it wasn't meant to be. Kevin Burton Smith at the Thrilling Detective website thinks that the format hurt it – too much prose for the comics fans and too much comics for the more literary-minded – but I don't know. maybe he's right. I always bring copies along when I do shows, but no one ever buys them or shows much interest.

Ultimately, there just wasn't a market for the magazine.

I think the last issue I published – Volume 2, Number 2 – was a really slick little package, and the previous two issues both had a lot of good stuff in them, including a fun interview with Mickey Spillane, a William F. Nolan short about Dashiell Hammett, and some very good articles and reviews. I'm proud of them – I just wish I had been able to pay the contributors.

Obviously, I still love crime fiction and crime comics. My Femme Noir and Gravedigger books, my Guns In The Gutters blog, these are all the direct descendants of NOIR magazine. In fact, La Femme was originally conceived as a mascot for the magazine that I planned on introducing in that fourth, unpublished issue, and Gravedigger artist Rick Burchett contributed illustrations to the first two issues.

In retrospect, it was something I'm very proud of – especially since putting it together was essentially a one-man show – but it never really had a chance.
Posted by Christopher Mills at 1:31 AM

Email ThisBlogThis!Share to TwitterShare to FacebookShare to Pinterest
Labels: Crime Fiction, My Projects

I'm sorry you had to serve as a kind of object lesson. They put you through the ringer on that one. I can imagine that in these kinds of things it requires even more creative energy than merely writing a novel. Dealing with others by itself can be a nightmare.

I loved NOIR and had a standing order for it through my comic shop. Too bad it didn't survive. Cool name and idea... and execution.

What ever happened to Wayne Dundee. I read a couple of his novels and enjoyed them... is he still around. I guess I could do a google search...

Hey! Thanks for giving us the low down. iS was a cool idea and remains a cool idea. The covers alone are worth the price of admission.

I loved NOIR, too, although I think I've lost my copies during my several moves across the country. I do have very fond memories of it.

So far as Tekno Comix goes, the mere fact that you used their copier and scanner, to me, makes NOIR the best thing--by far--that ever came out of their offices.

Interesting rememberance, here's an interesting interview with the late Mickey Spillane, NPR & particularly the program Fresh Air w/Terry Gross has done quite a few interviews with crime/mystery authors in the past and there's an archive if interested:
http://www.npr.org/templates/story/story.php?storyId=5573128

I bought the first and second issues of Volume II and thoroughly enjoyed them. It's a shame that the project didn't survive. I can't believe people don't show interest in them when you bring them to shows. Do you still have copies of the first issue (Vol.I) for sale by any chance?

Thanks for sharing this experience, and thanks for going through the tribulations of publishing the book in the first place. I labored to find copies of some of these to complete my Michael Mauser collection...

Did that second Mauser story get published anywhere else? I think this might have been the Brereton cover, used for Draw! Magazine: http://3.bp.blogspot.com/_aatuWUTj6ic/RiVdgABLPPI/AAAAAAAAAaA/XgAYI4Z-qKc/s400/z041707brereton.jpg

Gonzalo B: I only have a couple copies left of that first issue,a nd I'm hanging onto them for my personal archive. Sorry.

Armstrong Sabian: Yes. That was indeed the cover that Dan originally painted for NOIR. He actually wrote a pretty decent little story to go with it, too.

This was a nice little magazine. I liked it quite a bit. Thanks for sharing this lookback, Chris.