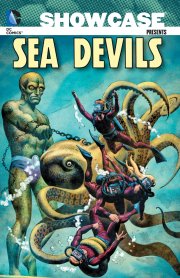 Ever since I saw the Walt Disney version of 20,000 Leagues Under The Sea in elementary school, I've been fascinated with underwater adventures of the fantastic kind. This explains my affection for Voyage To The Bottom Of The Sea (not to mention, Man From Atlantis!) and books like Gaylord Dubois' Rex, King Of The Deep (about an American millionaire who builds his own super-sub in WWII to battle Nazi U-Boats) and the 80s men's adventure paperback series, Omega Sub.

When I was a kid in the 1970s, DC Comics published several of their titles as 100-page quarterlies. To fill out that expanded page count without paying for new work, they reprinted tons of classic (and not-so-classic) Golden Age and Silver Age stories - which were all new to me.

It was in those reprint fillers that I first discovered the chronicles of the Sea Devils, a group of undersea adventurers. Those stories - abundant with sea monsters battling heroic frogmen (and one woman) - really pushed my adolescent buttons.

DC has just collected the first 16 issues of their Sea Devils comic book (along with three issues of Showcase that debuted the feature) in one of their telephone book-sized Showcase Presents volumes. Over 500 pages, printed in black & white, which really suits the gorgeous artwork of artist Russ Heath. The scripts are by DC workhorses like Robert Kanigher and Bob Haney, so you know the stories are going to be wild, absurd and, well, awesome. I can't wait to dive into the book later tonight.

Posted by Christopher Mills at 8:48 PM