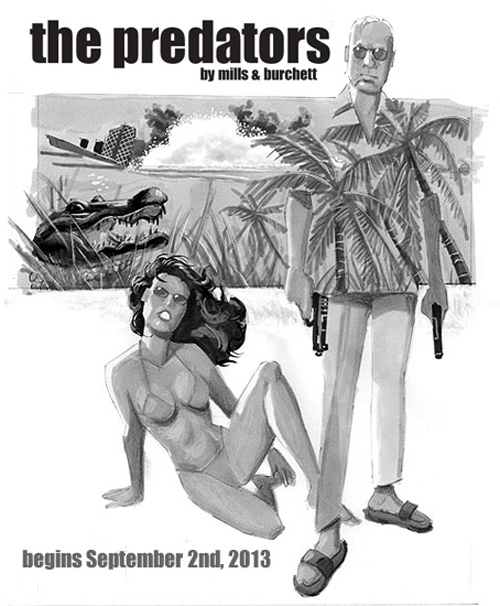 It's been almost a decade in the making, but the wait is nearly over... the new Gravedigger adventure, "The Predators," by Yours Truly and artist Rick Burchett, begins on Monday, September 2nd, at http://www.gravediggercomic.com.

For nine years people have been telling me how much they wanted to read more Gravedigger, so I'm expecting a lot of hits on the site on Monday. Don't disappoint me....
Posted by Christopher Mills at 11:13 PM 1 comment: Links to this post

Email ThisBlogThis!Share to TwitterShare to FacebookShare to Pinterest
Labels: Comics, GRAVEDIGGER, My Projects

Monster Cereals Return From The Grave

When I was a kid growing up in the 1970s, my favorite breakfast cereal was General Mills' Count Chocula. I can't even guess how many boxes of that sugary, chocolate-flavored cereal I consumed between 1975 (when the product was introduced) and, say, the mid-80s, when I finally stopped eating cereal regularly.

Count Chocula was one of five monster-themed cereals manufactured by the company. The most popular one, after Count Chocula, was the strawberry-flavored Franken Berry, followed by the blueberry-flavored Boo Berry. I never cared for those berry-flavored cereals, but I seem to remember my sister sometimes ate Franken Berry. Two more fruit-flavored cereals were introduced later - Yummy Mummy and Fruit Brute (immortalized in Quentin Tarantino's Pulp Fiction), but I don't recall those being sold in my area, and in any case, they didn't last long. Count Chocula, Franken Berry and Boo Berry were manufactured for decades, but in recent years, those three products have only had limited distribution, and only during the month of October. 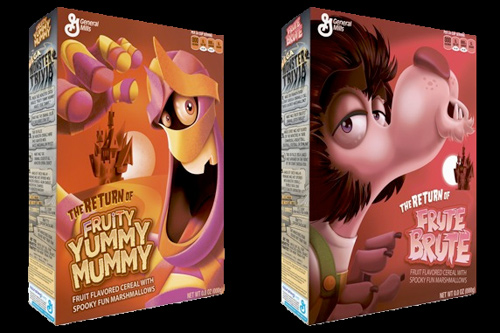 This year, General Mills is offering all five flavors during October. The packages will apparently feature truly hideous new artwork, but the Target chain will exclusively sell the products in "retro" packaing featuring the original 70s art. I'm actually thinking about visiting Target (a store I generally avoid) and picking up one of each....


Anyway, I recently stumbled across this half-hour video compilation of vintage monster cereal television commercials. Man, these really bring back memories! I had just about every single toy/premium shown in the video! I don't know who voiced these characters, but the Boris Karloff and Peter Lorre impressions (for Franken and Boo, respectively) in the early spots are terrific!
Posted by Christopher Mills at 2:06 AM No comments: Links to this post 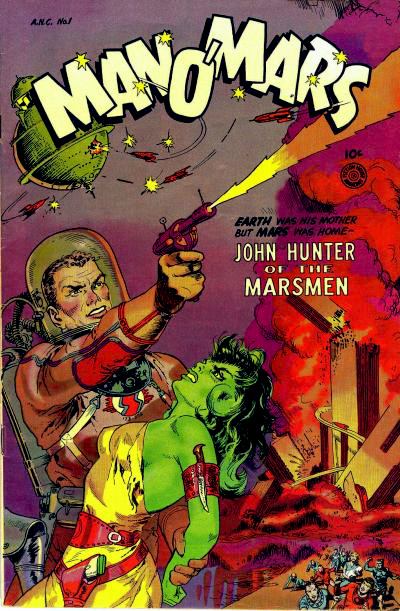 This week's space hero comic is Fiction House's Man O' Mars, which had just one issue, published in 1953. The Grand Comics Database credits this ray-blasting cover to artist Maurice Whitman.
Posted by Christopher Mills at 12:57 AM No comments: Links to this post 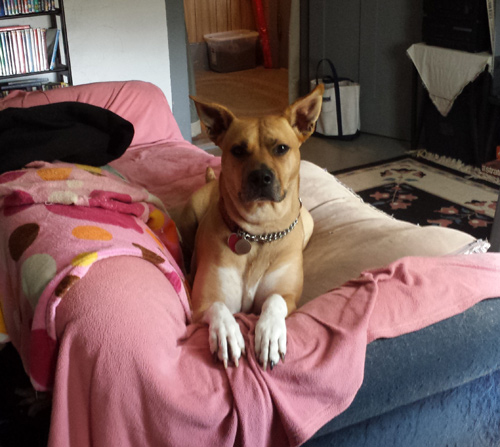 Max has been with us for about eight months now, and as you can see, has made himself well and truly at home. Once again, we lucked out, pet-wise - Max is a great pal and companion; just a terrifically good-natured mutt.
Posted by Christopher Mills at 2:49 AM No comments: Links to this post

Email ThisBlogThis!Share to TwitterShare to FacebookShare to Pinterest
Labels: Pets 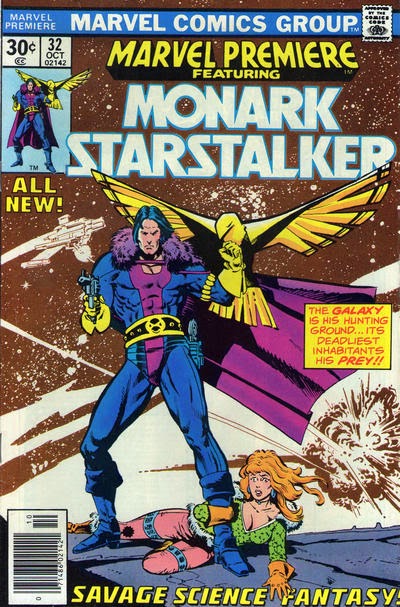 Monark Starstalker was, despite a nigh-impossible to say aloud name, a cool Howard Chaykin sci-fi creation for Marvel Comics. The interstellar bounty hunter appeared in Issue #32 of the company's "try-out" title, Marvel Premiere in 1976, but failed to earn his own series. In fact, he wasn't seen again until 2009, guest starring in Nova, and then, a few years later, a Wolverine(!) miniseries.

I have not seen any of those later appearances, but from what I've read online, they really don't sound much like the character Chaykin create in '76.
Posted by Christopher Mills at 11:00 PM 2 comments: Links to this post 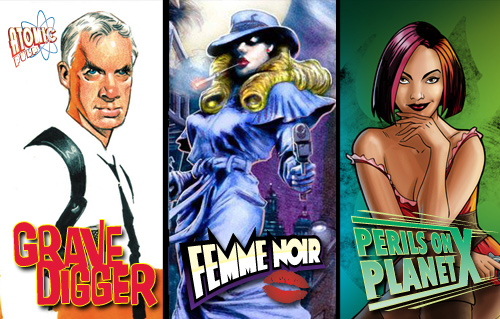 Monday is the FINAL episode of Gravedigger: The Scavengers by Yours Truly & Rick Burchett! But... have no fear, because the next, all new, Digger McCrae caper, The Predators, begins in just a couple of weeks!

Wednesday is the launch of the new Femme Noir website, beginning with a serialization of the "origin" story (stories?) "Blonde Justice," with art by Joe Staton, inks by Horacio Ottolini and colors by Melissa Kaercher. Even if you own this issue or have simply read it before, I hope you'll drop by and check out the new digs!

And, of course, Perils On Planet X continues this Friday, with the third installment of Chapter 2, "Flight Into Terror," with art by Gene Gonzales and colors by Ian Sokoliwski.
http://www.perilsonplanetx.com/
Posted by Christopher Mills at 10:57 PM No comments: Links to this post

Well, I didn't plan it that way, but I didn't update my DVD Late Show website in either June nor July. Heck, before this week I hadn't posted a new review since early May. Sure, I had reasons why DVD reviewing had to be pushed to the back-burner - May and June were devoted to finishing up some overdue comics scripts, and July was mostly just too damned hot to write - but I hate that the site was neglected for so long (again). I may not have a lot of readers, but I owe them better than that.

Anyway, this week, I've gotten back to it, and have posted reviews of Warner's new Charlie Chan Collection, Anchor Bay's Solomon Kane Blu-ray, and the Bomba The Jungle Boy collection from Warner Archive (all of which I've mentioned here at one time or another).

Later today, I hope to have a review of Synapse Films' terrific Hands Of The Ripper Blu-ray/DVD combo... and maybe one more.

I'm going to try and keep making regular updates for a while - I have a lot of discs on my desk to review. Stuff like the Adventures of Superboy - Season Three, Spymaker: The Secret Life of Ian Fleming, The Beasts Are On The Streets, The Name Of The Game Is...Kill!, Captain Caveman - The Complete Series, Hangar 18, Fortress and Greystoke: The Legend of Tarzan on Blu-ray... plus a whole lot more. Stay tuned!
Posted by Christopher Mills at 2:22 AM 2 comments: Links to this post 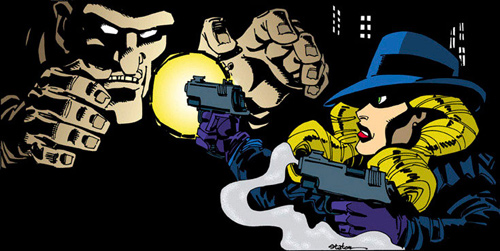 Okay - not too long ago, I promised that I would soon have an announcement regarding Femme Noir, the comic that I co-created with artist Joe Staton. Here it is (although it's really two announcements, I guess):

On August 14th, we're re-launching www.femme-noir.com, where Joe and I will be re-presenting classic Femme Noir comics and archiving all the pin-ups, fan art and character sketches that have been created over the last 10+ years since we debuted our fishnet-clad heroine online. We will also be using the site to keep fans informed on the progress of a new Femme Noir graphic novel, which we're shooting to get out next year.

All four issues of the 2009 "Dark City Diaries" miniseries, as well as previously-published short stories & online strips, will be serialized - for FREE - online, a page a week. If you already have these comics in your collection, the online versions will be supplemented with new bonus material (samples of Joe's pencils, my original script pages, commentary, etc.). The site will also function as a “Production Log” for the new graphic novel – and any other future Femme Noir projects/products.

It is our hope that new readers will enjoy the stories as serialized, but, of course, the print versions will also be available for purchase from publisher Ape Entertainment (as long as supplies last!) for the impatient. We also hope that folks who already have these stories will enjoy the bonuses and project updates. Along with the reruns, we'll be occasionally previewing work-in-progress art from the forthcoming graphic novel, "Cold, Dead Fingers," and have other surprises in the works, as well.

Now... about that "Cold, Dead Fingers: The Graphic Novel." This will be a completely re-written and re-drawn, extended version of the very first Femme Noir online comics continuity, which appeared way back in 2000-2001. The basic plot remains the same, but it will be considerably expanded-upon, with additional characters, subplots, and action beats.

Femme Noir co-creator Joe Staton will, as always, pencil the book, and my frequent collaborator, Gravedigger artist Rick Burchett﻿, has volunteered to ink it. Rick got his professional start inking Joe on E-Man at First Comics in the 1980s, and they make a formidable artistic team. Colors will be provided by the talented Matt Webb, who previously colored a couple issues of "The Dark City Diaries" miniseries. We're starting production on "Cold, Dead Fingers" this month, and hope to have it completed and released sometime in 2014.

Anyway - I know some folks will be disappointed that this announcement is mostly about re-presenting the existing Femme Noir stories online, but it is our hope that we'll be able to provide enough new content to keep our old fans interested and involved, while using the serialized web versions to attract new readers. So that's the news: classic Femme Noir serialized online for free, lots of bonus material (new and old), and a new graphic novel gearing up.

We hope you’ll check out femme-noir.com in a couple of weeks and make it a regular part of your online reading habit.
Posted by Christopher Mills at 1:01 PM 2 comments: Links to this post

Posted by Christopher Mills at 1:05 PM No comments: Links to this post