These Are The Voyages To The Bottom Of The Sea 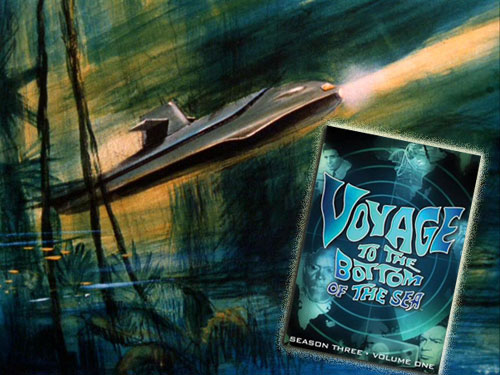 I've been collecting Irwin Allen's Sixties sci-fi series, Voyage To The Bottom Of The Sea, on DVD over the last few years, and at retail prices of  $25-$35 per half-season set, it's been going slow. I simply haven't been able - or willing - to shell out that much for only a half-season of a show - not when there are so many other things on my DVD wish list that I want to add to my video library that are more affordable.

Well, on Friday, Brandi and I swung by our local Best Buy  to see what they might have in the way of cheap Blu-rays. What I discovered was that they happened to have a bunch of TV-on-DVD sets on sale and, in particular, had all of the Voyage To The Bottom Of The Sea sets marked down to just under $10 each.

So I finally snagged both volumes of Season 3, and I'll probably go back today or tomorrow and pick up the first half of Season 4 (I already picked up the second volume of that final season a few months ago) and complete my Voyage To The Bottom Of The Sea collection.

Sure, it's silly stuff - especially the last two seasons - but I love it. It's definitely my favorite of Irwin Allen's genre shows. I like Time Tunnel (which I have on DVD) and Land Of The Giants (which I don't - yet), too. Have to admit, though... I've never been much of a fan of Lost In Space. I like the first, B&W season okay (and I own it on DVD), but I like those other shows more.
Posted by Christopher Mills at 5:22 AM

I'm just like you on this. I picked up the first season a few years ago when I found it super cheap at Target, but the other seasons always seemed too pricey for what they offered. The other day I wandered into Best Buy to look for some Sherlock Holmes stuff (Chris Lee's version if you must know) and there these were all for ten bucks each. It was a budget buster even then, but sometimes a man's gotta' do what a man's gotta' do.

When I'll get around to watching them is anyone's guess, but it's downright cool having them. Those giants were the coolest of beans when I was a mere lad.

It was odd that they changed the packaging for Season 4, but I'm not gonna' complain too much now.

I've got Time Tunnel (found it cheap at Target too) and I recently got hold of Lost in Space, so I'm Irwin Allen-ed up for quite some time. Land of the Giants will have to wait for some future date.

I just got back - literally - from Best Buy, where I picked up Season 4, Volume 1. Now my collection is complete!!!

Cool, thanks for the rec. They show Voyage to the Bottom of the Sea here on Me TV on Saturday late at night. I've enjoyed watching it when I can stay awake for them. They also show Get Smart among some other early shows that are still pretty entertaining.