31 Days Has October: VILLAGE OF THE DAMNED 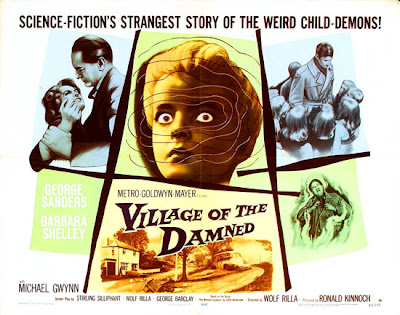 Tonight's Countdown To Halloween movie: Village Of The Damned, from 1960. Earlier today, we re-watched Halloween III: Season Of The Witch. Boy, even with Tom Atkins and Dan O'Herily, that film was a complete misfire. Intriguing premise, but unfortunately lackluster execution. Still - I can't get that damned Silver Shamrock jingle out of my head.

William Castle week didn't really go all that well, unfortunately - Brandi's been having a rough time at work lately, and she really wanted to burn our way through the Fringe season 2 Blu-rays that we've been renting from Netflix. So most of the week, we concentrated on those episodes, and she tried to get to bed earlier than usual. This left no time for our nightly fright features.

On Friday night/early Saturday morning, I did watch the new Blu-ray edition of the 1925 Lon Chaney Phantom Of The Opera. It looks great, and the film still holds up as a remarkable cinematic experience.
Posted by Christopher Mills at 9:00 PM