31 Days Has October: THE VAULT OF HORROR 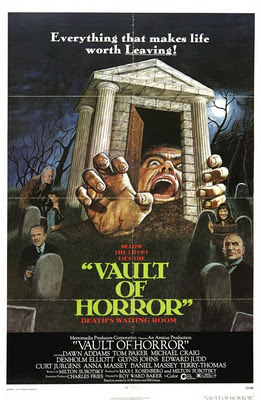 Tuesday's Amicus anthology was the studio's 1973 film version of the classic EC horror comic series, The Vault Of Horror. Directed by Roy Ward Baker, the film adapted five stories from the notorious comic, with varying degrees of success. Unfortunately, the 20th Century Fox/MGM "Midnite Movies" DVD appears to use the television syndication cut, as several seconds are missing and/or optically obscured.


Still it's a fun film, with some delightfully tacky early 70's decor and fashion, a fine British cast including the fourth Doctor, Tom Baker and Bond villain Curt Jurgens (no Peter Cushing this time, though - a serious omission, IMO), and some creepy moments. Its companion feature, Tales From The Crypt - also based on a famous EC title - is better, as I recall. We'll probably watch that one tomorrow.
Posted by Christopher Mills at 11:34 PM