31 Days Has October: Our FRINGE Binge 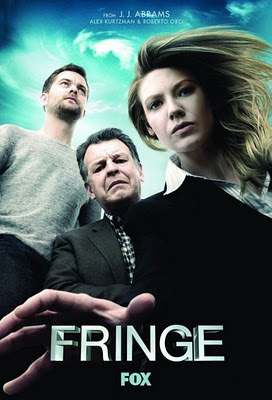 One thing that's been eating into our Halloween horror film watching has been the fact that the Blu-rays of the second season of Fringe have been showing up this month from Netflix, and Brandi and I keep binging on episodes. We didn't catch the show when it premiered - we didn't (and still don't) have cable - but a year or so ago, we found the first season on Blu-ray new at Wal-Mart for a ridiculously low price. As Brandi was a huge fan of Lost, and Fringe was from the same creator, (J.J. Abrams) we decided to pick it up.

We really enjoyed the show, but subsequent season sets were priced beyond our means. Eventually, we put the show on our Netflix DVD queue, and they started showing up in our mailbox a few weeks ago. We've just finished watching Season 2, and Season 3 discs should start showing up next week.

It's a fun show with a fascinating premise and a good cast. My particular favorite is John Noble as Dr. Walter Bishop. I love the fact that he's a mad scientist; a direct descendent of the characters that Boris Karloff played in all those Columbia B-movies back in the 1940s. In fact, I think the reason I like the show so much isn't because of the weird X-Files-like mysteries or the "alternate universe" mythology, but because it's the only TV show where a mad scientist is (essentially) the main character.

And although it's taken our attention away from the scary movies I'd intended to concentrate on these last few weeks, the show contains enough creepy and spooky stuff to still qualify as legitimate Halloween viewing.
Posted by Christopher Mills at 11:52 PM

I'm a fan of Fringe also, and although I enjoy the crazy Bishop character, sometimes his mumbling delivery is a bit hard to understand. Still as far as SF goes one of the better things on TV. I saw the premiere to Grimm on Friday, a mix of cop show/fantasy/horror. A fairly interesting premise, I hope the writing for the show stays strong.