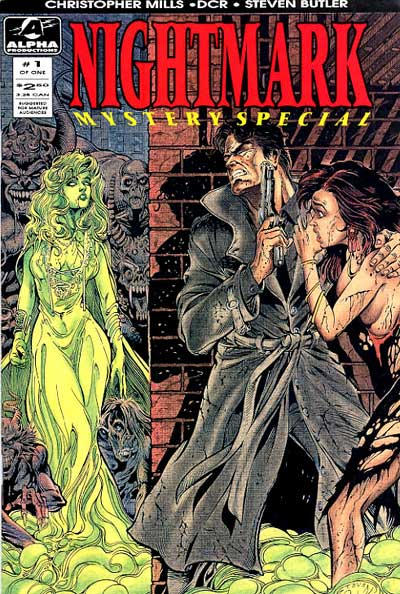 The first Wednesday Cover of this 31 Days Has October "celebration" is from the 1994 one-shot comic, The Nightmark Mystery Special. The character of Gideon King, The Nightmark, was my first published creator-owned property. King was a 1940s Boston private eye who had been chosen by unnamed powers to be the Nightmark - a grim & gritty champion against supernatural evil.

Obviously, I threw just about everything I loved into the mix - noir private eye fiction, Lovecraft, Kolchak, Hammett, Spillane -- but it never quite caught on. I wrote five Nightmark comics (and actually drew one of them) published by Alpha Productions between 1990 and '94, and revived the character in the Shadow House series for another five issues in 1997-'98. The cover above was drawn by artist Steven Butler, but I forget who rendered the colors.... And here's Gideon King on the cover of Shadow House #1, painted by the great Dan Brereton!
Posted by Christopher Mills at 12:01 AM