The Spies No One Remembers.... Except Me 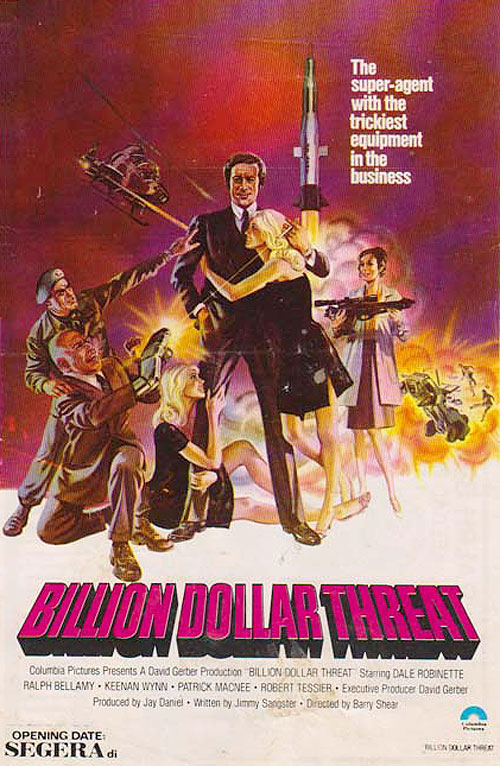 There are a few James Bond knock-offs that I remember watching on TV in the late 70s (& 1980) that I have never heard anyone else mention. One of these was Billion Dollar Threat, a 1979 TV movie that starred Dale Robinette as secret agent Robert Sands, who must foil the nefarious plan of mad scientist Horatio Black - played by none other than John Steed himself, Patrick Macnee - to destroy the ozone layer with a nuclear missile.

I actually taped this one off of TV, so I watched it a number of times. It was a pretty fair - if cheap - little Bondian adventure, written by Hammer Studios vet Jimmy Sangster (Deadlier Than The Male), who seemed to have a penchant for this type of stuff.... 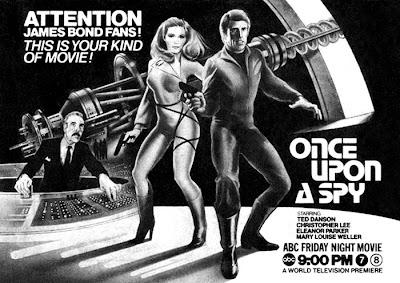 Because Sangster also wrote the 1980 ABC telefilm, Once Upon A Spy, which starred a pre-Cheers Ted Danson as a computer expert/reluctant spy who is drafted into a mission to stop another mad scientist - this time portrayed by The Man With The Golden Gun, Scaramanga, in the guise of Sir Christopher Lee - who has a laser cannon (another one?). I remember it as being a bit more deliberately campy than Billion Dollar Threat, in a Man From U.N.C.L.E. sort of way. 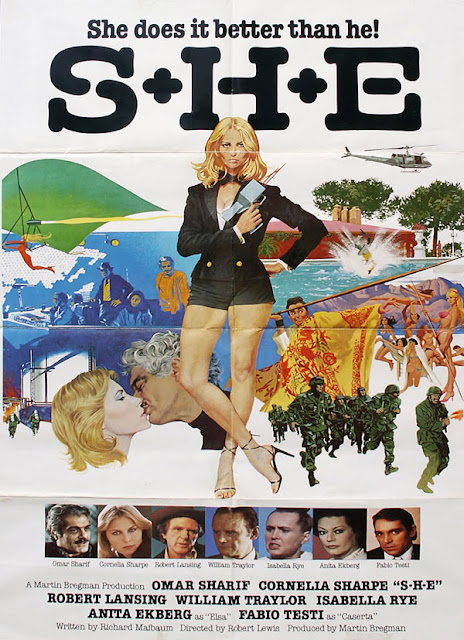 Sangster didn't write (I wonder how he missed out on this one), but legitimate 007 veteran Richard Maibaum (Goldfinger, Thunderball, et al) did, the same year's S*H*E - Security Hazards Expert, which starred Cornelia Sharpe as Lavinia Keane, a sort of female Bond in a globetrotting adventure that I remember watching but am unable to recall a single detail of. Omar Sharif played her adversary, an International blackmailer.

None of these are available on DVD, although S*H*E did get a VHS release.I would really like to see all of these again one day....
Posted by Christopher Mills at 6:38 AM

I think I remember 'Billion Dollar Threat', because when I told the plot to my older brother, he pointed out it was a riff on the plot from the original 'Moonraker' novel.

Well, it's been 30 years since I last saw it, but aside from the fact that both stories had a spy and a rocket, I don't recall them being very similar....

Well, that was mostly it. It had a super-spy and a rocket.

At the time, though, I know nothing about original Moonraker - I only knew the space shuttles & laser guns movie.

I enjoy S*H*E and Once Upon a Spy for what they are, but I've never seen Billion Dollar Threat. Did you ever transfer that VHS recording to DVD?

I haven't seen that cassette in decades. As far as I know, its long lost.

I'd like to get my hands on Once Upon A Spy and S*H*E someday. Haven't seen either of those since they aired on TV.

I remember BILLION DOLLAR THREAT and S*H*E, but ONCE UPON A SPY is a blank for me (which is unusual, even if I didn't watch stuff from back then, I generally remmeber them being advertised). Haven't seen them in decades either.

Whenever 'Billion Dollar Threat' and 'Once Upon A Spy' come up I think of 'Doctor Scorpion' a 1978 made-for-TV movie with Nick Mancuso as a retired spy who is reluctantly lured back into action to take down a mad scientist living on a tropical island. For some reason the three movies are always linked together for me.

Would love to see them released on DVD.