So, let's see... what's been going on here at stately Mills Manor? One cool thing was that Brandi let me order the first three Dark Horse Flash Gordon hardcover collections as my holiday present. This series of volumes collect all of the Flash Gordon original comic book stories (omitting the newspaper strip reprints) published by Dell, King Comics, Charlton Comics, Gold Key and Whitman, from the late Forties through the early 80s. Can't wait for them to arrive - I've read most of the King Comics issues (in Vol. 2) by Al Williamson, but the early Dell issues (in Vol. 1) and the Charlton issues (in Vol. 3) are all new to me!

Now if I could just pick up a little freelance income (or holiday cash), I could get the remaining two volumes....

Along the same general theme: after ten years of distractions, detours and discouragements (almost entirely of my own doing), I'm finally finishing the third chapter of the first story arc of my own space adventure comic, Perils On Planet X, this week. You have no idea how pleased I am to actually be writing the concluding scenes of a story that has been in my head for so long... especially since the art for the damned thing has been more than half finished for, literally, years.

I'm so excited that I really hope POPX will be successful enough to warrant artist Gene Gonzales and I producing the two further story arcs that I have in mind (I've always planned it as a trilogy) - and that it doesn't take another decade (or two) to get around to telling them.

If all goes well, we'll begin serializing Perils On Planet X online, a page or two a week, sometime in 2013, and will probably try a Kickstarter or IndieGoGo campaign to finance an eventual print volume. Stay tuned for further updates, and I'll be sure to let people know when we're ready to launch the new webcomic version. 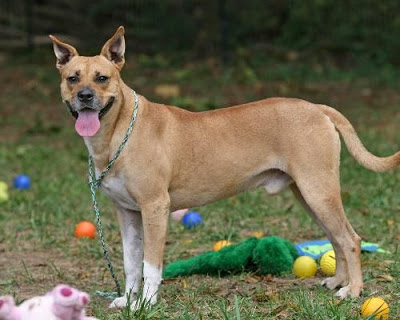 And, finally, it looks like we may have a new canine companion sooner than anticipated. After losing our girl China last November, we didn't want to rush into getting another dog. For one thing, the loss was so great that honestly, we're still grieving. But in the past few months we'd been talking more and more about adding another critter to the menagerie - we just figured we'd wait until Spring to start looking seriously.

But last week, Brandi was browsing Craig's List, and found an ad placed by an Arkansas shelter/rescue looking for a home for one of their dogs. There were pictures and a video. After checking them out, she showed the ad to me, and we agreed that the dog looked like a good fit for us.

Anyway, Brandi contacted them, then filled out an application, and then had a phone interview, all of which went well... and barring any last minute complications, it looks like we'll be adopting "Wags" (chances are we'll be renaming him) before the end of the month. We just need to finalize a few details - like getting him to Maine - and scrape up the adoption fees, but it all looks good.

Here's hoping all goes smoothly. Wish us luck. This house needs a dog.
Posted by Christopher Mills at 12:59 AM