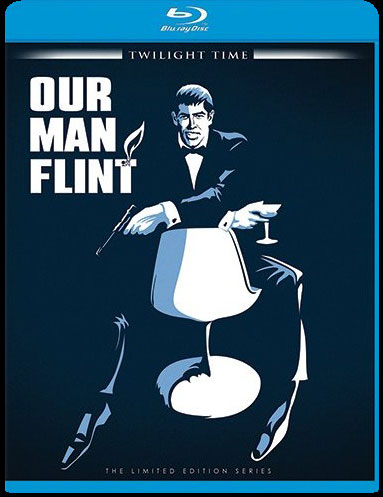 Well, I don't much like the fact that it's a Limited Edition disc, nor that it's so pricey, but I went ahead and pre-ordered the Twilight Time Blu-ray release of Our Man Flint, the first of two Derek Flint superspy capers starring James Coburn. It's supposed to come out in mid-January, with the sequel, In Like Flint, to follow in February. I'll probably pre-order that one, too. Because these discs are only issued in limited numbers, I can't really follow my usual method of buying used discs cheap on the secondary market; when these suckers go out of print, the price only goes up.


So, why did I bite the bullet on this one? Well, first of all, I'm a huge fan of the movie, and even though I have the very nice Ultimate Flint Collection DVDs that Fox put out a few years ago, this Blu-ray has a buttload of new bonus features, including a couple of new documentaries by John Cork - the guy who put together all the great documentaries on the James Bond and Charlie Chan discs. Ultimately, I just couldn't pass it up.

But I am content with the great collection I have. Those movies are the very essence of 60's cool. And that's because James Coburn was the real deal, an absolutely cool guy.

His take on the role of the taciturn "Britt" in The Magnificent Seven might just well be the single coolest character ever presented on film.

A cool character cannot care a smidge what others think of him, something us real people have problems with, but Britt was stone cold confident and beholden to no one. He did what he did for reasons which suited him. And he did it well.