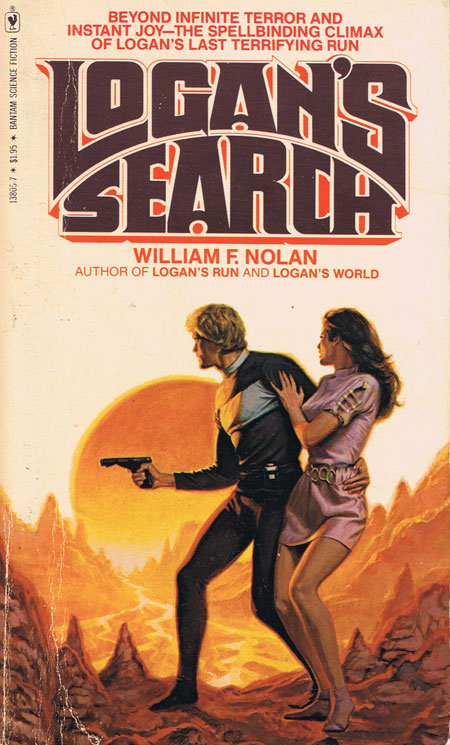 Here's the fiery cover to third volume in William F. Nolan's "Logan" trilogy, Logan's Search, published in 1980. The artist is uncredited, though the style looks familiar. (Bob Larkin, maybe?) Anyway, I'm in a "Logan" mood tonight, as I picked up the new DVD release of the 1977 Logan's Run television series yesterday, and have been re-watching the show. I'll be reviewing the DVDs at both my DVD Late Show and Space: 1970 sites in a day or two.
Posted by Christopher Mills at 1:34 AM

I've yet to read Logan's Search and common opinion seems to be that it's a bit of a stinker. However I loved both Logan's Run (natch) and Logan's World; both fast, fun and crammed full of ideas (alas, not something that totally translated to the screen) so maybe I need to hunt this out.

How did I not know Nolan wrote a whole trilogy? Logan's Run was one of my favorite books as a kid and I've been meaning to re-read it anyway. It's awesome to know that there are two new (to me) books to add to it.