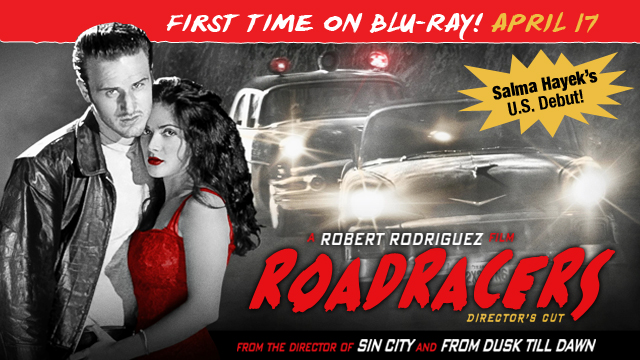 Back in 1994, Showtime aired a series called Rebel Highway - ten remakes-in-name-only of juvenile delinquent/rock 'n roll exploitation films originally produced and released through Samuel Arkoff's American International Pictures in the 1950s. The series was produced by Lou Arkoff and Debra Hill. The directors - a list that included Allan Arkush, Joe Dante, Mary Lambert, Johnathan Kaplan, Ralph Bakshi (!), John Milius and William Friedkin - were each given a budget of  $1.3 million dollars and a 12-day shooting schedule. They were instructed to pick a title and do whatever they wanted with it.

As one might expect, the quality varied quite a bit. Most of the flicks were frankly unmemorable. Joe Dante's Runaway Daughters was fun, as was Arkush's Shake, Rattle & Rock! - but I can't really remember much about any of the others... except...

Probably the best of them came from the least-experienced filmmaker in the bunch. Based on the critical success of his $7,000 microbudgeted action flick, El Mariachi, Arkoff and Hill offered Robert Rodriguez a slot in the line-up. He picked the title Roadracers, and it became his second feature-length movie.

Roadracers is a lot of 50's fun, and remarkably polished, considering Rodriguez' inexperience at the time. Many of the trademarks and stylistic flourishes of his later films are in evidence, and he handles the cast as smoothly as the action. At the time, he was prepping Desperado for Columbia Pictures, and was having a hard time convincing the studio suits to go along with his choice of Mexican actress Salma Hayek for the female lead. To help persuade them, he cast her in Roadracers - and she steals the show with her screen presence and charm. (Not to mention her smoldering beauty.)

I own Roadracers on laserdisc, and am pleased to find out that it will be released on Blu-ray disc in two weeks (although I've read that Best Buy may already have it available; I'll try and swing by there and see if our local store has it) by Echo Bridge Entertainment. Now, Echo Bridge has a bad reputation for their disregard for proper aspect ratios and underwhelming transfers, but I've read an advance review of the disc and it sounds like they didn't screw it up too bad (although it does appear that they cropped the original 1.33:1 TV-aspect ratio to 1.78:1 to fit new, widescreen sets).

Also, this is a "Director's Cut," so hopefully, Rodriguez  had some input.

Obviously, I'm a fan of the flick. It's early Rodriguez, before he became enamored (or could afford) extensive greenscreen and virtual, CGI special effects. It has real cars, real action, great music, and a terrific cast. I'm looking forward to seeing how it looks on Blu-ray - especially as its preorder (and Best Buy) price is less than $10 bucks.

Posted by Christopher Mills at 3:39 AM

Never heard of it but sounds great.

I'll check it out,
Brian

My favorite films in the series were Moonshine Highway with Kyle Maclachlin and Randy Quaid, and Motorcycle Gang with Gerald Macrainey.

I just put Motorcycle Gang on my Netflix instant queue. I don't remember it from '94, but as it's John Milius directing, I'm willing to check it out.

According to the IMDb, Moonshine Highway wasn't part of the Showtime Rebel Highway series, and isn't available on Netflix nor DVD.

Too bad, because my wife is a huge fan of Kyle MacLachlan, and would probably love to see it.

Found a copy of Roadracers at Best Buy tonight for $8.

By the way - it looks like all of the Rebel Highway movies are available on Netflix instant play.