Zanthar Of The Many Worlds 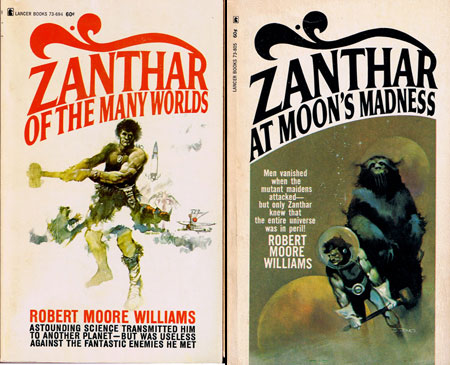 While I was tracking down the paperback volumes of Robert Moore Williams' "Jongor" jungle pulp adventures online a few weeks back, I discovered that the author had also written a four-volume science fiction series about a character named "Zanthar," published by the legendary Lancer Books (they of the regal purple page edges) in the late Sixties. From the Jeff Jones artwork and the copy on the cover of the first of these, Zanthar Of The Many Worlds, it sounded like Edgar Rice Burroughs-styled "sword & planet" stuff, and, as we all know, I love that stuff, so I ordered the first two books in the series.

They both arrived today, and from a quick skim through the first book and its immediate sequel, Zanthar At Moon's Madness, it appears that the series isn't so much a John Carter-type swashbuckler, as it is a space adventure along the lines of a futuristic, interstellar Doc Savage (or Captain Future) story. While it's not what I was expecting, it is, nonetheless, certainly intriguing, and I look forward to reading these books in the near-future.
Posted by Christopher Mills at 5:04 PM

Hey Chris, I am looking forward to your review of these books. I remember seeing these way back when, but I never picked them up.

I just got all four in. Haven't read any yet