Here's the cover, by Rich Buckler & Joe Rubenstein, to the 7th and final issue of DC Comics' Star Hunters. The book was the company's attempt to ride the Star Wars comet, premiering in the Fall of 1977. Written by David Micheline, it chronicled the adventures of an Errol Flynn-inspired space rogue named Donovan Flint and his crew of renegades as they battled an oppressive regime. I was a big fan of this book back in the day, and would like to someday re-assemble the run.

The characters were first seen in issue #16 of the company's catch-all title, DC Super Stars, which alternated as a reprint book and a showcase vehicle. That first appearance benefited from the classically-styled adventure art of Don Newton. I liked Rich Buckler's art on the series okay, but it lacked the gracefulness of Newton's work. 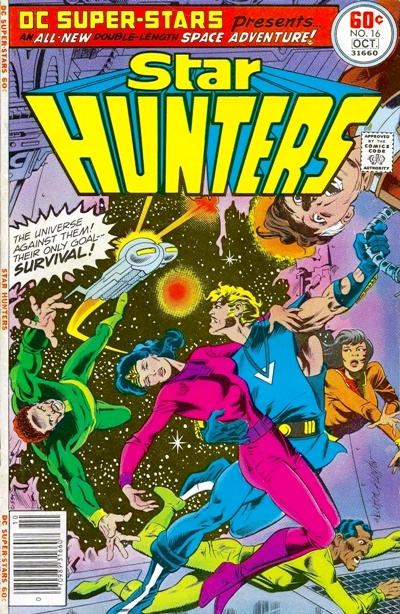 Posted by Christopher Mills at 12:04 AM

"Graceful" is an ideal word to describe Newton's work.

I never read Star Hunters, but I will agree with your impulse to put together a run. I find that's a lot of fun to do with some of these older series I've ignored or let go for some reason.

Chasing down old issues and Warp or DNAgents has proven to give me much pleasure.