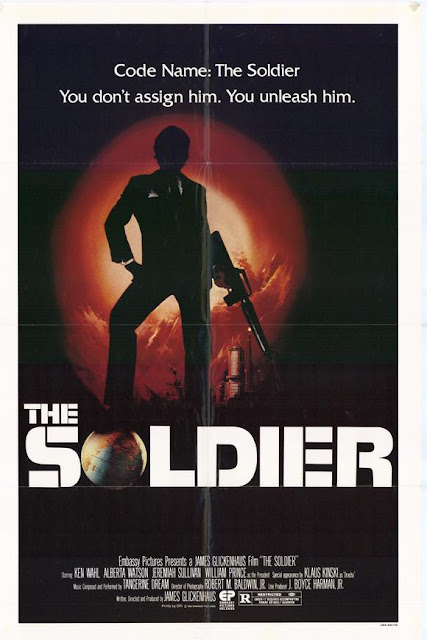 I just reviewed director James Glickenhaus' 1980 vigilante flick, The Exterminator, over on the DVD Late Show website. It's not a great movie, but I enjoyed revisiting it, and I began to wonder whatever happened to Glickenhaus' follow-up film, the 1982 low-budget, action-espionage flick, The Soldier.

Again, I wouldn't really say that The Soldier is a particularly good movie - like a lot of the director's films, it has a few truly terrific action set-pieces tenuously linked together by a somewhat dodgy script. But in the early 80s, the movie was ubiquitous - you could find the VHS tape in every mom & pop video store, and it ran endlessly on HBO in late night/pre-dawn slots for several years.

Starring Ken Wahl, pre-Wiseguy, a few other tough-guy actors (most notably, the late Steve James), and Klaus Kinski as the heavy, The Soldier was a definite cult favorite - especially among teenage males and insomniacs. The director even paid tribute to it in his 1988 cops 'n robbers flick Shakedown, where he had it playing constantly at the 42nd Street grindhouse frequented by Sam Elliot's character. For some reason, though, it's never made the jump to digital disc - at least not in U.S. As far as I have been able determine, the rights might be held by MGM, so maybe there's a slim chance that they'll release it as one of their Manufacture-On-Demand "Limited Edition Collection" titles.

I'll have to keep an eye on Netflix. If The Soldier shows up on Netflix's Instant service, that will be a definite indicator that someone has finally dug it out of the vault and may be working on a MOD DVD release (that's been MGM's pattern so far).

Posted by Christopher Mills at 3:26 AM

Ah yes...The Soldier! I have mostly fond memories of this flick from a summer I spent aboard a fishing factory ship in Alaska back in the early 80's. We had two movies on that ship and we watched them over and over and over.

One was Motel Hell and the other was The Soldier. I bought myself a copy of the VHS soon after but I haven't watched it in fifteen years I bet.

Your description matches my memories of the flick perfectly.

No doubt, compared to films like Harry Potter or The Lord of the Rings The soldier is no doubt an amatour movie however!, if you have an hour to spend films like The soldier or the later torque, which got a bad review in denmark, is actually some great movies mainly because something happens all the time, which means that time flies away which it not does't always do when wathing movies like Harry Potter.
In addition, The Soldier movie also gives a great insigt into how things where when the cold war raged which means that the film is also, to some extend a great educational and historical movie about the cold war, so the movie gets 5 out of 5 stars if I where to rate the movie.

"He made four of our best agents pay dearly, for a very stupid mistake."