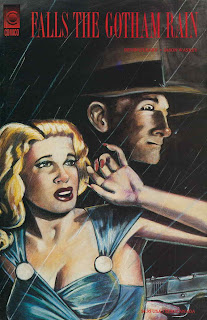 This slender, 48-page graphic novel from '92 is a bit of an oddity. It's a 40's-styled film noir pastiche with subtle sci-fi overtones that possesses some minor similarities to Alex Proyas' 1998 motion picture, Dark City.

Trench coat-clad P.I. Vin Dressler searches for a missing girl in an unnamed city/police state divided into a red sector and a blue sector, where it "rains every day." Like the aforementioned Dark City, the town has numerous billboards scattered around, advertising luxurious, tropical vacations, but no one seems to have ever left the city, nor does there appear to be any world beyond its borders.

The plot is thin and straightforward, the script by O'Leary rife with captions and dialogue loaded with the stereotyped similes and metaphors generally associated with private eye voice-overs. So loaded, in fact, that it's almost a parody of the Raymond Chandler style, though I somehow doubt that was the intent. The writer tries for a Kafka-esque tone of surreality, but is only partially successful. It's not terrible, just kind of half-baked.

The art by Waskey, apparently rendered in black & white pastels with occasional spots of red, is nicely done, atmospheric and moody, although there's a heavy reliance on photo reference. In fact, various noir icons make appearances in the book – copied directly from classic film stills – including Peter Lorre, Ingrid Bergman and Alfred Hitchcock. Some panels (the heavily referenced ones) are nicer than others, but the overall effect is quite pleasing, and is the book's main selling point.

For fans of classic film noir, Falls The Gotham Rain is a decent homage, but offers very little in the way of anything new. Its sci-fi elements are so slight as to be easily missed, and have little effect on the story itself, effectively amounting to nothing. Still, the art is nice, it's a quick read, and its heart seems to be in the right place.

If you stumble across a copy in a back issue bin somewhere, its worth picking up.

Three out of Six Bullets.
Posted by Christopher Mills at 12:00 AM

Nice review. Pretty time-efficient, too. Thanks. I liked Noir, for in a way often lacking nowadays, even the bad guys, villains, and femme fatals had some style and cultivation. Comes proverbially down to "Better good basics than crappy details!" in my opinion.

In case you care: I arrived via Tenkars Tavern.