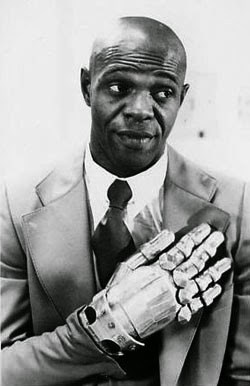 In re-watching this series, I'm struck by just how bad Thomas Remington Sloane is at maintaining a cover. In each of the first three episodes, his undercover identities are completely blown within minutes of meeting his opponents — or sometimes even their underlings! Well, I guess it's difficult suppress your natural persona and pose as someone else when you're as cool as T.R. Sloane!

Of course, Sloane attempts to infiltrate McAvoy's private army by posing as a merc, only to be exposed immediately, and moments later, Torque – who had snuck into the villain's compound to back-up Sloane – is also captured... and his cybernetic hand disintegrated by the Metal Debilitator!

The boys ultimately escape and foil the plot, and there's a great helicopter-to-moving-halftrack transfer stunt by Conrad's stunt double to liven up the final act. There's also a pretty decent martial arts fight in the opening scene between Conrad (who appears to be doing most of the fighting himself) and an Asian mercenary.

Interestingly, McAvoy is revealed to be working for the organization KARTEL – a mysterious group of war profiteers and arms merchants first mentioned in the (at the time still unaired) TV movie pilot, T.R. Sloane (a/k/a Death Ray 2000).

• This is one of two Sloane episodes penned by Dick Nelson, whose other spy-fi writing credits include episodes of It Takes A Thief and The Man From U.N.C.L.E.
Posted by Christopher Mills at 12:00 AM