Adventures On Other Worlds 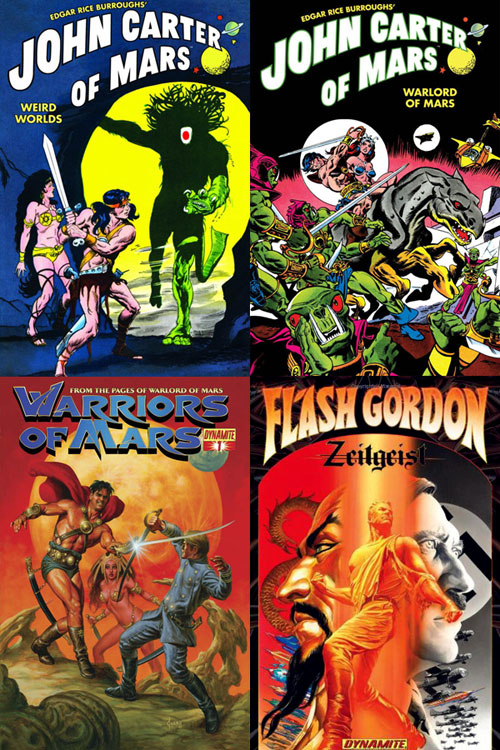 My birthday was earlier this week, and I was fortunate to receive a little cash as gifts from various family members. As I usually do around my birthday & Christmas time, I decided to pick up a few graphic novels. This year, my focus was almost entirely on the interplanetary adventure genre.

I ordered two John Carter Of Mars comics collections from Dark Horse Comics. The first of these, Weird Worlds, collects all of the Carter stories published by DC Comics in the early 1970s, while the other volume presents nearly the entire run of Marvel Comics' series from the latter half of that decade. The Marvel John Carter, Warlord Of Mars book was one of my favorite comic book series of all time (along with their Star Wars series of the same vintage), and I've long wanted a square-bound collection of those Barsoomian chronicles for my bookshelf.

The other two trade paperbacks I sprung for were from Dynamite Comics, a company that I've had mixed feelings about in the past. Exploiting the public domain status of Burroughs' early novels, they've been publishing their own Carter comics for the past few years. I've never read any of their Mars books, but I took a chance on Warriors Of Mars because I was intrigued by the premise. In this book they've dusted off Edwin Arnold's Gullivar Jones (protagonist of Lieut. Gullivar Jones: His Vacation, a Martian adventure novel published more than a decade before Edgar Rice Burroughs' A Princess Of Mars), and introduced him to John Carter's milieu. Scholars have long noted the similarites between Arnold's novel and Burroughs' subsequent Martian tales, so I'm intrigued by the idea of seeing the two works/characters combined.

I also picked up the collection of their Flash Gordon: Zeitgeist miniseries, because I've read that the Alex Ross-plotted tale incorporates a lot of story elements from the 1980 Flash Gordon movie and the 1979 Filmation animated television feature. I happen to like both of those versions, and I know that Ross is a huge Flash fan, so I'm curious to see how that series turned out.

With luck, most of these books will be here by the weekend!
Posted by Christopher Mills at 12:00 AM

I didn't know that Dynamite had made use of the Gulliver mythology. Hmm. I might have track that down. I just got the Bison copy of the novel and was reading it again after a few decades. I might have to dig this up too.

I have the top two. Reviewed Weird Worlds on goodreads. It wasn't too bad. Haven't read the other. I have a bunch of the dynamite Mars stuff and it's quite good. Though I don't have this one.