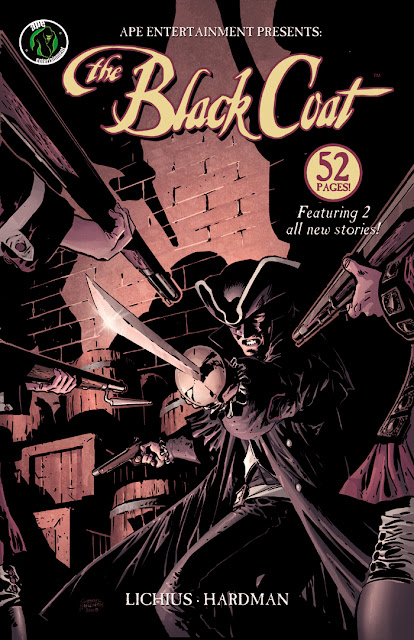 One of my favorite adventure comics of the last few years is The Black Coat. Created by Ben Lichius and Francesco Francavilla, the Black Coat is a masked spy/adventurer operating during Revolutionary War, fighting the British - and the occasional supernatural menace. The character - a refreshing blend of classic pulp tropes with a unique setting and premise - has appeared in several comic book miniseries and specials from Ape Entertainment (coincidentally, the publisher of Femme Noir) illustrated by a number of extremely talented artists; this striking Gabriel Hardman cover is from a 2008 one-shot, and is probably my favorite.
Posted by Christopher Mills at 12:47 AM

I like the cover, I didn't know Francavilla worked on these. I'm currently reading his The Black Beetle from Dark Horse, and it's pretty interesting as well.