Out West With Bat Masterson 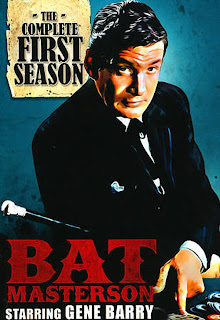 Still wandering the range with late-50s TV Westerns. Finished up the second season of Have Gun - Will Travel on DVD. The writing on the show is terrific and I think Richard Boone's Paladin is one of the all-time great television protagonists, but the picture quality on the official CBS discs is pretty poor, especially considering how much they charge for the sets. Still, if I can find the later seasons as inexpensively as I found S2, I'll probably pick them up.

Right now, I'm working my way through the first season of Bat Masterson, the 1958  series starring Gene Barry (Burke's Law, The War Of the Worlds) as the legendary gentleman gunslinger. Not quite as literate or innovative as Have Gun - Will Travel, it's still a really good half-hour Western, with well-written stories, great guest casts, and a charismatic, offbeat hero.

The DVDs are really nice, too - they're put out by an outfit called TGG Direct, and sport very good transfers from clean prints. Contrast is good, and the audio is clear and crisp. These are fully authorized DVDs, too, licensed from MGM. Much better looking than the Have Gun - Will Travel transfers (or the many public domain discs of old TV shows out there); they're about on a par with the Wanted Dead Or Alive discs I own. The price is extremely reasonable, too - where Have Gun - Will Travel sells for around $40 per season, Bat Masterson retails for $15 or less.

If you're into vintage TV Westerns, Bat Masterson - both the show and the DVDS from TGG Direct - comes highly recommended.

Posted by Christopher Mills at 1:48 AM

As I've stated before, I watch no commercial television. I don't subscribe to cable - it costs too much, especially since I don't want to pay for fifty channels I'm never going to watch - and we cannot receive broadcast TV where I live.