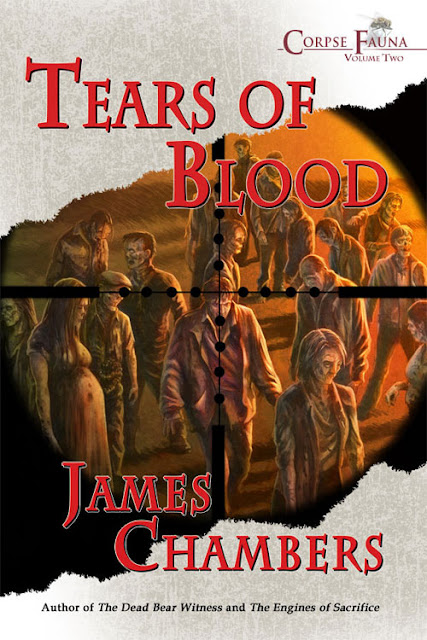 I'm a bit late in posting about this (sorry, Jim!), but the second volume in my pal James Chambers' Corpse Fauna cycle, Tears Of Blood, is now on sale from Dullahan Press, an imprint of Dark Quest Books. Jim explains:


This is (volume two) of the four-volume Corpse Fauna series, which will complete a story cycle which I began writing in 1997. Although some of the Corpse Fauna stories were previously published, these new editions will present them in revised and greatly expanded versions with new stories to be published for the first time.

Jim is a exceptional horror writer. He and I were both editors and writers for Tekno*Comix back in the 90s, and collaborated together on several projects, including our Shadow House comic book series. Tears Of Blood, as well as its predecessor, The Dead Bear Witness, presents a fantastic, terrifyingly original take on the zombie apocalypse genre, and come highly recommended.

By the way, as with the first volume, I designed the cover dress, which features an illustration by the great Glen Ostrander. The plan is for me to lay out and design the covers for the remaining volumes as well.

You can order the book from Amazon here:  Tears of Blood

Posted by Christopher Mills at 11:54 AM

Email ThisBlogThis!Share to TwitterShare to FacebookShare to Pinterest
Labels: Horror Fiction, My Projects