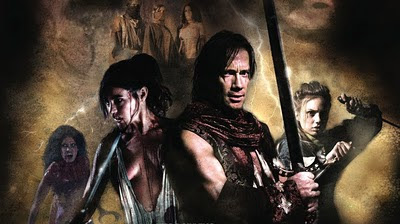 In 1982, I went to see The Sword And The Sorcerer, directed by Albert Pyun, at my local cinema. I pretty much loved it. To my 17-year-old sensibilities, it was a near-perfect movie: swashbuckling heroes, naked women, old-school make-up effects, and a rousing score. The balance of humor and adventure was just right, and if certain aspects of the film were a little absurd, hey - it was a fantasy. At the end of the movie, a title card came up, promising a sequel: Tales Of An Ancient Empire. I couldn't wait. I was ready for another adventure like the one I'd just enjoyed.

As it turned out, I could wait. In fact, I had to. It's taken Pyun 28 years to finally create that sequel, and it's coming out on DVD very soon. When I first heard that Tales was actually being made, a year or so ago, I was thrilled. I was even more thrilled when Pyun actually stopped by this blog to talk it up. And when he announced, a few months ago, that people could pre-order the DVD directly from his company, I scraped up the cash and placed my order.

Since I pre-ordered, Pyun e-mailed me and offered (and the others who already paid for their discs) an opportunity to view the trailer for Tales online before it was made available to the general public. I watched it yesterday afternoon... and was disappointed.

Now, the fact is I was disappointed because, for the last 28 years, I've been wanting another film experience like Sorcerer, and, based on the trailer, that's not what Pyun's served up. The trailer for Tales looks more like a horror movie about vampires that just happens to be set in a medievalesque fantasy setting. All dark shadows, pretty girls with fangs, frankly unconvincing CGI effects, and almost no humor. Whatever else Tales may be, it doesn't look like a swashbuckling adventure full of heroic swordplay and tongue-in-cheek humor. Instead we get - of all things - vampires.

Along with zombies, they are just about the most played-out, unscary "monsters" around.

But it's not Pyun's fault that I'm disappointed. It's his movie. He made the movie he wanted to make, and rightfully so. He's under no obligation to meet my expectations, which are pretty much those of a 45-year-old manchild nostalgic for the memory of his first R-rated movie, and 28 years of fantasizing what shape a sequel would take.

Pyun solicited opinions over on Facebook, and I obliged, admitting that it wasn't what I hoped for, and that I missed the sense of adventure and swordplay that had made Sorcerer so much fun. To my surprise, he took down the trailer, and based on my comments (and others, of course) actually recut the trailer! The second version does play somewhat better, but it still doesn't look like the movie I was hoping for....

I'm still enthusiastic about the film, and glad that I pre-ordered it. I've waited 28 years for it, after all. And when it arrives, it's going into the player as soon as I can get it unwrapped. I'll try to approach it as objectively as possible, and judge it on it's own merits; for what it is and not what I expected it to be. And, with luck, I'll enjoy it on those terms.

Still... vampires? Really?
Posted by Christopher Mills at 2:51 AM

I am so annoyed, I totally missed the pre-order offer!

Albert left a message on my blog to, after I mentioned the new film, I have have a link to him on Facebook, how did I manage to miss that.

Oh well, I will just have to wait for the standard edition now!

The Sword And The Sorcerer is also one of my favorites and mainly because it's just a fun damn adventure movie. I've been looking forward to this, too. I hope it's not a disappointment.

Does Matt Houston have a cameo?

Lee Horsley appears - in the trailer he's seen walking into a tavern, surrounded by hot chicks. There also appears a shot with a projectile sword blade impaling a vampire chick, so....

For the record - I HATE CGI BLOOD SPRAYS. I know it's cheaper than setting up a practical effect on set (and less messy, too) but it looks like shit. (Also hate CGI muzzle flashes on guns, but that's not pertinent to this particular film, just another pixel pet peeve.)

I've been following your posts about this film, since your blog was where I first read about it and it really got me excited. I don't really share the terrible negative outlook on this that some other commenters do. To say it looks like a SyFy movie is pretty crappy, but people are saying that because of the lower budget and Kevin Sorbo. Nowadays it's hard to get a movie made and if Pyun really wanted to make this movie happen for fans of the Sword and the Sorcerer...he did it whether it has spectacular effects or not. CGI and FX are expensive so he probably did what he could within his budget. I think it will be pretty decent. Since there's not enough sword and sorcery in movies or TV, it's nice to see a film like this get a release...who cares if it's straight to DVD. I'm definitely looking forward to it.