The Passing of a Childhood Friend 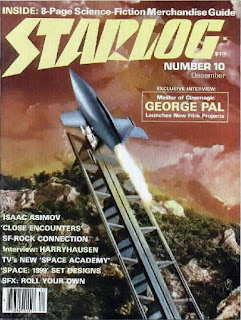 I was talking to my artist friend (and Captain Midnight collaborator) Rich Clark today on the phone while at my desk. We were chatting about various things while I idly surfed through some of my daily internet stops. I clicked over to Mark Evanier's blog and was suddenly struck speechless. When Rich asked what was wrong, I managed to stammer out the sad news that Starlog magazine has ceased publication.

Now, Rich wasn't particularly distressed by the news, but I certainly was. Back in the mid-1970's, being a science fiction fan just was not cool. Prior to Star Wars, anyone admitting to liking science fiction – at least in the rural Maine schools I attended – was subject to ridicule and occasional physical abuse. As far as the adults in my life, they were all practical New England yankees who had no time for or thoughts to spare for make-believe fantasy stuff about spaceships and aliens. I felt very much alone in my obsession, hiding my James Blish and Alan Dean Foster Star Trek paperback adaptations from my schoolmates, and keeping my thoughts about the short-lived Planet of the Apes and Logan's Run (both of which I loved as a eleven year-old) TV shows to myself.

But sometime around 1976, while browsing the comic book shelves at the local Mr. Paperback bookstore while my mother shopped for groceries next door – the same Mr. Paperback store where I had bought most of my Blish Trek books – I spotted a colorful painting of Kirk and Spock on the magazine shelf above the comics. Normally those shelves were off-limits to me, but certainly this particular magazine had to be okay – it was Star Trek.

Better – it was Starlog. 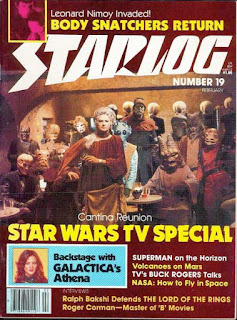 I was a regular reader from that day until around 1990, when I moved on to magazines like Cinefantastique and Filmfax. For many years, the magazine was my best friend in a way; my only link to the unknown others around the country who shared my love for the fantastic. As Famous Monsters of Filmland was to the "Monster Kids" of the 60's, Starlog was my lifeline in the 70's and 80's. Not only did Starlog cover all the major science fiction blockbusters from Star Wars on, they also covered B-movies, classic films, current and vintage TV shows. They interviewed not only stars, but writers, directors, authors and – especially – special effects wizards. The writers never wrote down to the readers and they opened my eyes to all the wonders of science fiction media. Even now, I will occasionally stumble across something on DVD that I've never seen before but recognize because Starlog covered it 20 years ago. And then I usually buy it.

It was Starlog that introduced me to shows and movies of the decades before my birth – shows like The Invaders, Voyage to the Bottom of the Sea, The Prisoner, and movies like This Island Earth, The Time Machine, The Incredible Shrinking Man, Buck Rogers and the Ray Harryhausen classics. Because I read about them in the pages of the magazine, I sought them all out, and I can't imagine my life without having experienced and enjoyed them. And it wasn't just TV and film; the magazine introduced me to SF authors, too – folks like Arthur C. Clarke, Isaac Asimov, Harlan Ellison, Richard Matheson, David Gerrold, Ray Bradbury. I was first exposed to the artwork of pulp illustrator Virgil Finlay through an article in an early Starlog and Ron Goulart's articles on SF comic strips gave me my first exposure to Alex Raymond's work on Flash Gordon.

Like I said above, I haven't read the magazine since around 1990, but I still lament it's passing. It was one of my most important childhood friends, and while the name will live on as a website, it just isn't the same.
Posted by Christopher Mills at 12:19 AM

While I wasn't a regular Starlog reader, by any means, I certainly was a fan of the magazine. It was a class act and I do regret it's passing.

The end of an era.

I was with you back in the day. And I particularly appreciate your comment about Starlog being like a best friend. I was lucky enough to have one other friend who loved SF but, other than that, Starlog was it. It's hard for folks 30 years and younger (who have had the internet since they've been able to read, more or less) to fathom what it was like with NO access to SF material other than printed mags like Starlog. That was it.

Oddly, I never subscribed (probably a cash flow issue) but I always, always read the mag at the bookstores. And, when a new film opened (Jedi; Batman (1989)), I bought the Starlog issue and pored over the photos and stories to no end.

Yes, it is sad. But I'm sure glad I got to live some years with that wonderful magazine.

Chris, that was interesting to read. Thanks for sharing. I had not heard of Starlog's passing either, that's a shame. I know the computer has caused the demise of many publications and newspapers. I guess that's a part of the way we live life these days.

I also related to the way you felt like an outsider when younger. Heck, I feel like one now! I hide my comics interest now as I know my co-workers would ridicule me over it. But at least, I've always had a friend or two that I was able to share my interest with, some times.

Unfortuately, where I grew up (small town in Texas), I lived so far from a bookstore, the best I had was a long trek to a 7-11, and all they had was comics, Mad magazines and that's about it. So I was pretty much in the dark. Plus I'm a pretty huge music fan, so finding magazines about anything on pop culture was really hard.

Modern kids don't know how lucky they've got it. No matter what interest, you can always get on the internet and find something. It was so different back then.

That's a total shock - I just picked the mag up earlier in the week from Borders. Mind you it's not been as easy to get over here in the UK as it used to be. Very sad, though.