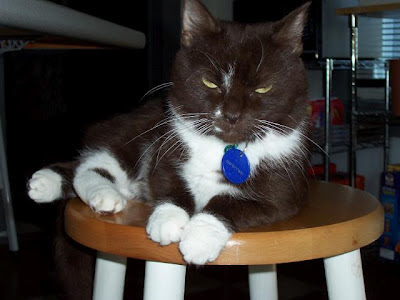 As you poor, regular readers of this self-indulgent tripe I call a blog already know, my wife and I recently had to put our beloved cat, Audrey, to sleep. Her cancer was terminal, and we wanted to spare her pain.

It left a very large hole in our life.

Over the last few weeks, Brandi had been looking into possibly adopting another cat. As it turned out, the local shelter was having free cat adoptions this month, so Saturday we drove over to see if there was some abandoned feline that we could provide a new home for. Well, right inside the door was a cage with a beautifully charismatic brown & white kitty named Snickers.

Well, we looked at another cat, but came back to Snickers, and thought we could live with her. Our only concern was whether she could get along with our dog, China. So we brought her home. 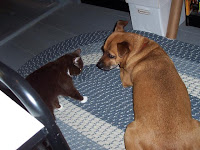 She spent a while exploring our old farmhouse and ignoring the dog – which hurt China's feelings – but quickly settled in, and was soon even giving the dog friendly head-butts. The name "Snickers" had to go, though – especially since she hadn't had it long – and she was soon rechristened "Zoe."

She's only been around for a day and a half, and she's still a bit aloof, but she seems to be coming around. I think she's going to be a very important part of our family.

Also brought home a few DVD rentals this weekend, including Children of Men, Hollywoodland and The Darwin Awards.

Children of Men was a terrifyingly believable hellride, with strong performances from the entire cast and brilliant direction by Alfonso Cuarón, (who also directed the best Harry Potter film to date, Prisoner of Azkaban).

Hollywoodland was okay. Diane Lane was gorgeous, Bob Hoskins was great, I still don't think much of Adrien Brody, and Ben Affleck never convinced me he was George Reeves. Too bad the studio wouldn't let the filmmakers go with Kyle McLachan.

The Darwin Awards was a decent indie dark comedy, with a great premise that I thought they didn't quite do justice to. I also thought Joseph Fiennes was miscast, but Wynona Ryder looked great and turned in a truly decent performance.

One of our cats is named Zoe, too!

Congrats on the new addition to the household!

Congrats on the new addition.

Congrats with the new cat.

The Darwin awards sounds worth watching. I hadn't even heard of this.

Ben Affleck has never been able to convince me that he's ANYTHING at all except as bland as oatmeal! All of the great stars are gone.

Love the cat and her name.