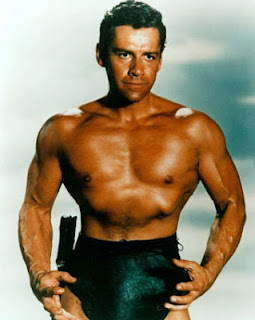 My favorite Tarzan movie of all is probably Tarzan's Greatest Adventure, the one where they dropped Jane, Boy and the "Me Tarzan" schtick, and made Tarzan a true bad-ass again.

When Tarzan drops Cheetah off at the treehouse, says, "Don't wait up," and heads off after a boatload of brutal, heavily armed criminals (including Sean Connery) carrying only a longbow and a knife... well, that's the beginning of one of the best adventure flicks of all time.

Gordon Scott – the Greatest Tarzan – has passed away.

According to friends, Scott passed away the morning of April 30th in Baltimore at Johns Hopkins Hospital. Gordon had been hospitalized for several months recovering from heart valve surgery. Unfortunately, following the surgery he suffered complications and was kept in ICU. Just recently the complications reoccurred and he physically fought to remove his IV whenever he could, choosing not to prolong his life.

Ironically, he died just a day short of the anniversary of the death of his close friend and fellow Hercules, Steve Reeves.

He was 80 years old, and the father of five... and reportedly died penniless.

Here's what Wikipedia has to say:


Born Gordon M. Werschkull in Portland, Oregon, Gordon Scott was raised in Oregon and attended the University of Oregon for one year. Upon leaving school he went into the United States Army and was honorably discharged in 1947. He then worked at a variety of jobs until 1953, when he was spotted by a talent agent while working as a lifeguard at the Las Vegas Sahara Hotel. Due in part to his muscular frame and 6'3" height, he was quickly signed to replace Lex Barker as Tarzan. He was also a friend of Hercules star Steve Reeves, and collaborated with him as Remus to Reeves' Romulus in Duel of the Titans (1961).
Scott also played Hercules in a couple low-budget productions during the mid-1960s. His final film appearance was in The Tramplers, filmed in 1966, released in the U. S. in 1968. Scott was married to actress Vera Miles from 1954 to 1959. For the last two decades of his life, he was a popular guest at film conventions and autograph shows.

That's two Tarzans lost to us just this year.
Posted by Christopher Mills at 6:24 AM

Scott was a great Tarzan. I saw some of his Peplum and spagetti westerns too.

He will be missed.

Gordon Scott was the best Tarzan. I will have to check out some of those Italian movies!