Guns In The Gutters: DODGE'S BULLETS 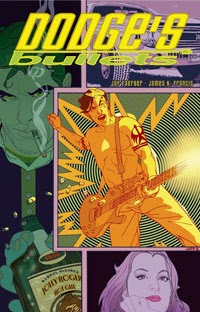 Veteran comics and TV writer Jay Faerber clearly loves the crime genre. Sure, much of his comics work is in the superhero field, but he's managed a few notable crime comics credits, too, with The Hat Squad, Near Death, and Point Of Impact...  and his 2004 private eye graphic novel, Dodge's Bullets from Image.

Webster Dodge is a young Seattle private eye, who lives on an old houseboat and plays guitar in a struggling bar band. He doesn't have an office, instead meeting his clients at a local coffee shop with convenient Internet access. One of those clients hires Dodge to find his long lost father, a picture of whom he's spotted in a newspaper photo of a Seattle marathon. Dodge takes on the seemingly-simple job, but soon finds himself – as is to be expected in a good private eye story – embroiled in a twisted case of false identities, stolen money and kidnapping.

Faerber's script is excellent, with a twisty yet logical mystery that keeps both his protagonist and his readers perpetually off-balance. The character of Webster Dodge is an inspired creation – an utterly believable contemporary shamus with a satisfying slew of insecurities and personal issues that keep him rooted in reality. He's not a perfect TV eye, nor a film noir cliche.

The black and white art by James Francis is suitably gritty, with an appealingly organic aesthetic and clear storytelling. Some of the backgrounds are a little too sketchy for my tastes, but at least they're there. Faces are distinctive and expressive, and the overall effect is very pleasing. it's nice stuff.

Dodge's Bullets is most notable for attempting – and rather successfully – to tell a modern private eye story, set in contemporary world of cellphones, PDA's, and laptop PCs, rather than being another pastiche of 40's genre tropes. There's no trenchcoats or scarfaced gangsters here, just a good mystery in a recognizably realistic 21st Century Seattle. Sure, the modern approach is common in prose fiction, but comics creators can often cling tenaciously to the comfort and safety of pastiche, and it's nice to see Faerber and Francis break free of the tired noir trappings.

When Jay saw that I had Dodge's listed as an upcoming review on the original Guns In the Gutters blog a few years back, he offered to share some background information on the creation and history of the project. Here's what he sent along:


I've been a private eye fan for as long as I can remember. It probably started with Magnum PI, which I used to watch religiously with my dad. From there, I discovered Spenser: For Hire (and that, in turn, led me to discover the Spenser novels by Robert B. Parker). It wasn't until I was in my 20s that I discovered The Rockford Files, but those three PI characters served as the main three inspirations for Dodge's Bullets, which remains a project of which I'm immensely proud.

The original plan was to do a three (or was it four?) issue mini-series, but once work got under way, Image convinced me to just make it a full-fledged "graphic novella." The original artist was Mike Norton, who has since gone on to make a name for himself at DC Comics. Mike was the first artist to actually draw Webster Dodge, and he even drew a 5-page sequence. Eventually, he had to back out due to being overcommitted. But he recommended an artist named Tom Feister, who was doing a lot of work with Tony Harris. Tom drew some pages, and brought his own sensibilities to the book before he, too, had to back out due to being overworked. Like Mike, he's gone on to bigger and better things at DC.

I then came across James Francis, a (fairly) local artist who had graduated from the Kubert School but hadn't done much in the way of comics. The book was to be set in Seattle, which is where I live, and James lived on the Washington coast, so he was much more of a local than Mike or Tom ever was. He at least got the Pacific Northwest "vibe" we were going for. At any rate, James signed on to draw the book, and we started over. That is, we weren't going to use any of the stuff Mike or Tom drew.

James did an amazing job with the book. That double-page title spread is still one of my favorite pieces of art from any of my projects. I served as a bit of a "location scout" for the book, tolling around Seattle and taking photos of various landmarks and locations for James to incorporate into the book. Sure, he lived in Washington, but Washington's a big state, and he was a good 90 minutes away from downtown Seattle, where most of the action from the book took place. So I'd email him photos and he'd use them for reference.

In addition to the artwork, my favorite thing about Dodge is the relationship between Dodge his policeman father. I'm not sure the rest of the supporting cast is as strong as it could've been, and if I ever revisit the character, I may tweak things in that regard.

James and I came really close to doing a follow-up mini-series at Moonstone Books. Image didn't really have any interest in a Dodge sequel, but Moonstone was eager to do something. James's band (yes, James is a musician, and so is Mike Norton and Tom Feister -- I'm the only one who isn't musically inclined) ended up getting more and more gigs, and he seems to have faded away from the comic book scene, and the sequel never took root.

Thanks for sharing, Jay.

Dodge's Bullets is a solid contemporary PI tale that deftly sidesteps, or finds new angles for, most of the common cliches of the genre, and is well worth picking up if you can find a copy.

Five out of Six Bullets.
Dodge's Bullets may still be available through Amazon and other online dealers.
Posted by Christopher Mills at 11:29 PM

Email ThisBlogThis!Share to TwitterShare to FacebookShare to Pinterest
Labels: Crime Comics, Guns In The Gutters