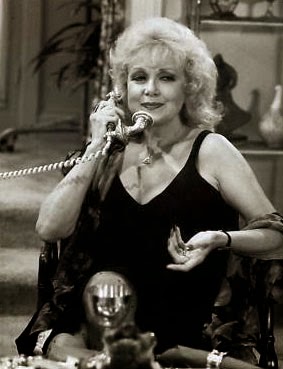 Episode ten (originally airing on December 8th, 1979) of A Man Called Sloane, "Lady Bug," features more spy-fi gadgets than any other episode, including a gas-spewing silver dollar, a submersible automobile, a tape-recording wristwatch, a keyring that can give off electric shocks, and a cigarette case with a 2-way TV communicator. Oh, and The Director (Dan O'Herlihy) plays around with a rocket-launching umbrella in the lab, much to "Q"-girl Kelli's (Karen Purcill) dismay.

The villain of the piece is a KARTEL contractor named Chandler (the late Edie Adams), a glamorous, middle-aged woman who likes to surround herself with young male bodybuilders. She's working with a disgruntled entomologist (!) who has bred a hybrid species of "devil locusts" that can strip a field of crops in a matter of seconds, and whose bites are fatal to humans. With the help of a pretty young entomologist (Barbara Rucker), Torque and many of those aforementioned gadgets, Sloane manages to save America's breadbasket from KARTEL's sinister plan to corner the world's food supply.

"Lady Bug" is a hoot, with an entirely ludicrous – but amusing – plot and a great performance by Adams, who seems to be enjoying her opportunity to play against her usual image, with charm and a sly wit. Torque actually gets a little bit more to do in this episode, rescuing Sloane from a grasshopper (!) and demonstrating a few new accessories for his cybernetic hand. There's also a fun homage to Hitchcock's North By Northwest when a low-flying crop duster drops a load of poison gas on Sloane and his lady faire in a field. Unfortunately, there's also a judo match between Sloane and a henchman (played by Martin Kove), where it's clearly – even on my crappy copy of the show – a stunt double filling in for Conrad.

A fun episode. Two more to go!
Posted by Christopher Mills at 11:28 PM