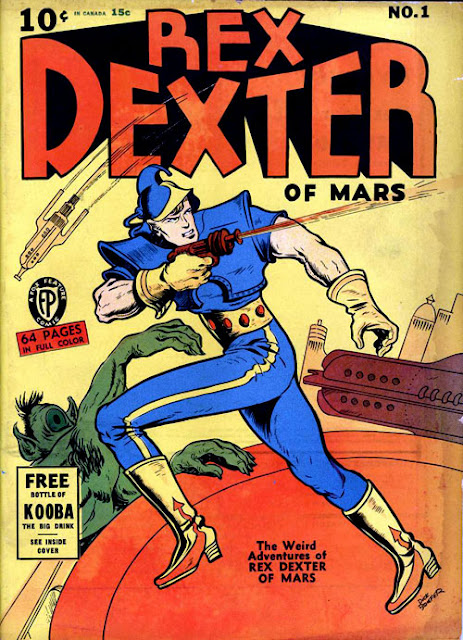 Dick Briefer's Rex Dexter of Mars was a delightfully bizarre interplanetary adventure strip that ran in Mystery Men Comics from Fox Publications in the early 40s. In the Fall of 1940, the space-hopping Rex received his own comic - which lasted exactly one issue, the cover of which is posted above.

Someday, stargods willing, I will write a Rex Dexter graphic novel; he's one of two Golden Age space heroes (the other, of course, being Basil Wolverton's Spacehawk) that really fascinate me. As the character is now in the public domain, all I need to do is find the time... and an artist to collaborate with!
Posted by Christopher Mills at 12:00 AM

Rex Dexter is a pretty great book, but for my money the best public domain space ace is Youthful Magazine's "Captain Science." He not only has the single greatest moniker a space hero could hope for, but his adventures are crazy. His best friend gets brain washed into footing the bill for his super science, he abducts a Nazi's daughter after destroying him and everything she knows, and he destroys entire civilizations with out blinking.

Most of the art is pretty amazing too (especially if your a Wally Wood fan.) Whenever anyone asks me what my X-plorers world looks like I pull up "Brant Craig" a back up form the same book.