The Lone Wolf Of The Void! 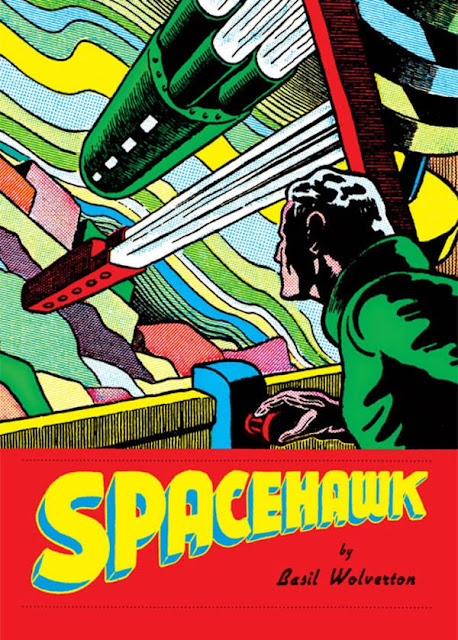 My favorite Golden Age space hero - one almost as bugnuts bizarre as Dick Briefer's Rex Dexter of Mars - was Basil Wolverton's Spacehawk, who appeared regularly in Target Comics from Novelty Press back in the early 1940s. He only appeared on one cover, but his adventures were outright brainbatshit crazy. 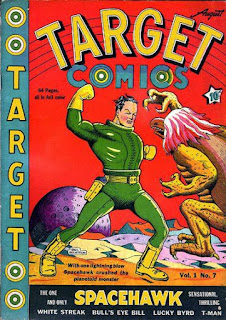 Wolverton's art style was delightfully grotesque and meticulous. His work was wildly imaginative and his aliens & monsters were just indescribable. His hero was completely unique, a sci-fi adventurer who didn't follow in the goody two-shoes traditions of Buck Rogers & Flash Gordon. No, Spacehawk was astonishingly brutal - and mysterious (he had no name other than "Spacehawk," and didn't even show his face until the third story!) - an 800 year-old, technologically-advanced, psionic humanoid from another solar system who patrolled the interplanetary spaceways acting autonomously as judge, jury and executioner whenever he detected the "evil thoughts"of cosmic criminals.

After nine adventures in space, the editors at Novelty Press insisted that Wolverton bring his hero to Earth to battle America's wartime enemies. So Spacehawk orbited the Earth in his spaceship, monitoring the planet for evil Axis schemes to violently thwart. These WWII adventures aren't quite as much fun as his planet-hopping capers, but they're still good, and did introduce a continuing archenemy for our hero, the evil scientific genius, Dr. Gore! 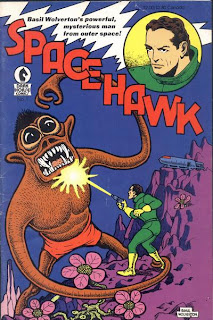 Back in the 90s, Dark Horse reprinted some of Wolverton's Spacehawk stories in a B&W miniseries, but didn't finish the run. Now, though, Fantagraphics has released the entire Spacehawk canon in one gorgeous, oversized volume. I received my copy yesterday, and I'm really impressed.

Considering that the art had to have been shot from the ancient printed comics, it looks remarkable. Clearly a lot of work went into the restoration; blacks are solid, whites are white (not yellowed), fine lines (and there's a lot of them!) are reasonably sharp & clear, there's no significant break-up in the lettering... overall, it's a terrific looking book, and I highly recommend it!

Spacehawk (like Rex Dexter) is one of those Golden Age characters that has fallen into the public domain. I don't want to be one of those guys who makes a habit of constantly exploiting old PD characters, but I must admit... I'd like to try my hand at a Spacehawk story one of these days. Just a one-off adventure - a tribute to Wolverton's mad genius and his one-of-a-kind space hero.

You can buy it from Amazon here: Spacehawk

Posted by Christopher Mills at 6:55 AM

Chris, Spacehawk looks like just the kind of material that needs a solid, entertaining, respectful but playful pastiche written.

I'm devoting 2013 to completing all of the long in-the-works/stalled projects that I should have had done years ago: a new FEMME NOIR graphic novel, the second GRAVEDIGGER graphic novel, the CAPTAIN MIDNIGHT novel and comic book one-shot, and PERILS ON PLANET X.

Assuming I manage to accomplish all that, 2014 will be for new projects... and maybe SPACEHAWK will slip in there somewhere....

Those earlier Spacehawk stories sound interesting, and the review makes me want to check out the new book.

The later stories are interesting, too - basil Wolverton was incapable of producing an "average" story.

Even when fighting Earthbound adversaries, Spacehawk was still a pretty ruthless guy, and in several of the stories he has an alien partner/sidekick (named "Dork!") to help him out!

Hey Chris, just wanted to let you know, I've nominated you for a Liebster Blog Award:

Thanks for tipping me. I didn't know this was available. I must have a copy. I will have a copy.