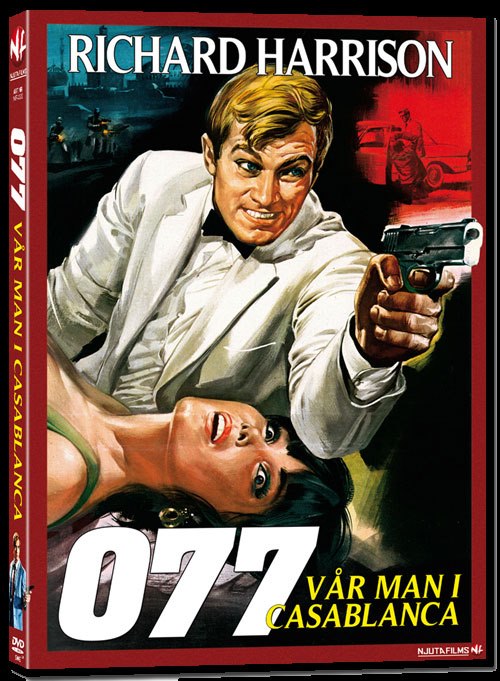 Over the last couple of weeks, I have been indulging in a Eurospy movie binge, working my way through my meager collection of 60s James Bond knock-offs whenever my back starts aching from spending too much time at the computer. 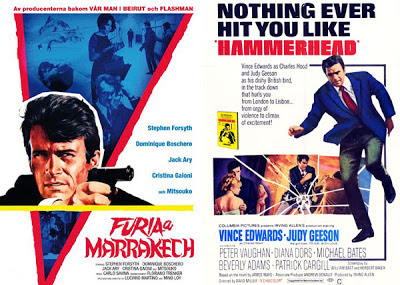 My definition of "Eurospy" is rather flexible; I include 007-inspired films from England as well as those produced on the Continent. This means that entertainments like the two "Hugh Drummond" flicks with Richard Johnson - Deadlier Than The Male & Some Girls Do - as well as Hammerhead, with Vince Edwards as secret agent Charles Hood, have been part of my pseudo-marathon. 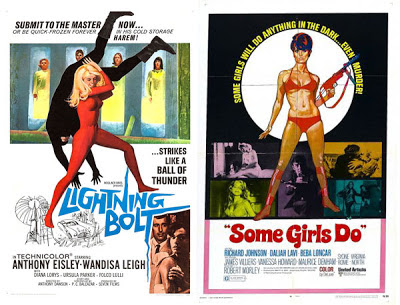 I even ordered a new disc for the occasion - a Swedish, Region 2 import of 1966's Killers Are Challenged/Our Man In Casablanca, with Richard Harrison as agent Bob Fleming. I ordered it from Diabolik DVD and was very impressed with their service. I enjoyed the movie, too. 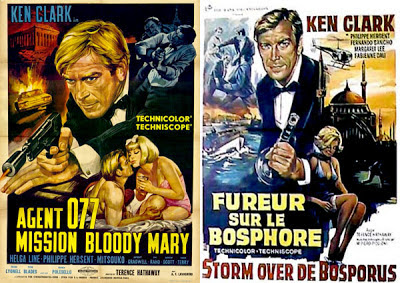 So far, this binge has included: Deadlier Than The Male, Some Girls Do, Hammerhead, Fury In Marrakesh, Lightning Bolt, Kiss The Girls And Make Them Die, Special Mission Lady Chaplain, Mission Bloody Mary, From The Orient With Fury and the aforementioned Killers Are Challenged. Before I'm done, I'll probably be watching Murder For Sale, Espionage In Tangiers, and Modesty Blaise as well.

What triggered this craving for badly-dubbed, bizarro sub-Bondian hijinks? I have no idea. But I'm really enjoying myself, and finding that I'm really getting caught up in the adventures of these amusingly dickish "superspies," enjoying all the gorgeous spy vixens (Daliha Lavi, Margaret Lee, Mitsouko, Helga Line, Daniela Bianchi, Beverly Adams, Elke Sommer.... sigh) and digging the utterly bonkers plots.

Surprisingly, I'm not tiring of them at all, and wish I owned more....
Posted by Christopher Mills at 12:20 AM

Have you ever seen the 60s OSS-117 films (not the more recent parodies, which are also pretty good)? I've seen two of them and they're pretty solid. One was written by Terence Young!

I have one of them: Murder For Sale with John Gavin. I expect I'll be watching it this weekend.

A strange Eurospy movie (made in Asia) is Asiapol with Jummy Wang Yu. I saw it recently and really enjoyed it.

Eddie Constantine starred in some Eurospy films in the 1960s, including Attack of the Robots (Cartes sur Table, 1966), and License to Kill (Nick Carter va tout Casser, 1964). The latter had Mitsouko in a small part as the villain's mistress.