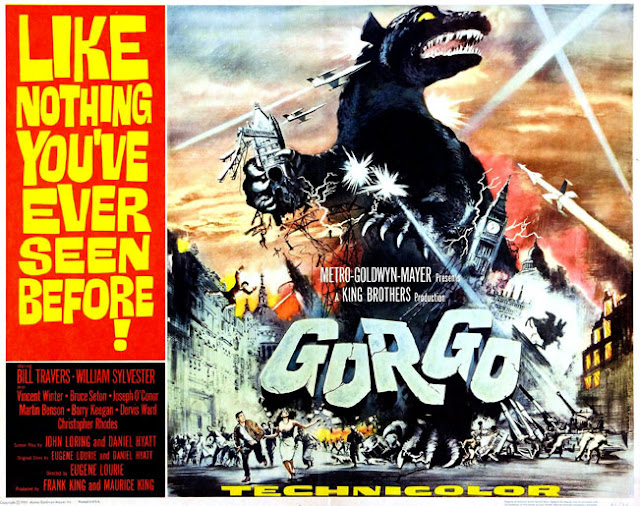 One of my favorite monster movies is Eugène Lourié's, Gorgo. The third of Lourié's triptych of giant monster flicks (following The Beast from 20,000 Fathoms and The Giant Behemoth), 1961's Gorgo is a terrific entertainment, with good performances, a solid script. and excellent "suitmation" (man-in-suit) creature effects and miniatures.

The film tells of an English salvage vessel crew that captures a thirty-foot tall reptilian creature off the coast of Ireland. They dub the beastie "Gorgo" and haul it to London and put it on display. Unfortunately, despite his primeval proportions, Gorgo's just a baby, and it's much, much larger mother of a monster is coming to retrieve her purloined offspring... and all the King's forces are no match for her maternal fury.

I watched the film again a couple weeks ago on the DVD released by VCI Entertainment back in 2005, and while the movie held up to my fond memories of it, the audio-visual quality was atrocious. Colors were faded and blurry, contrast was terrible, and there was a fair amount of wear and tear evident on the source print. To add insult to injury, the 1.78:1 widescreen transfer wasn't anamorphically enhanced for 16x9 displays. Fortunately, I've heard rumors that VCI will be remastering the title in HD from new, much-improved source materials for a new release sometime in 2013. I really hope that's true. 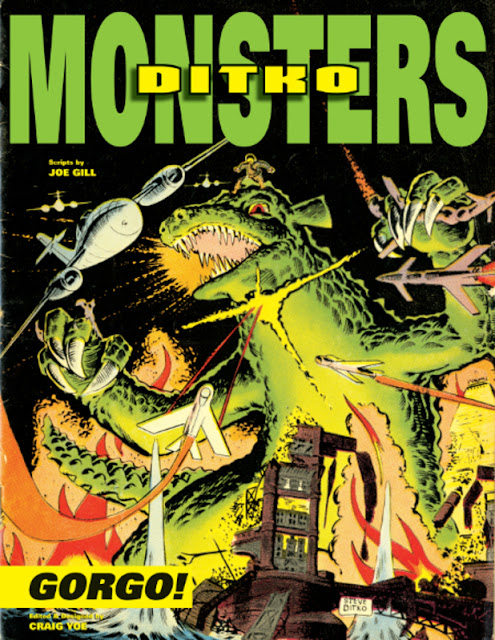 Not only was Gorgo a movie star, but Charlton Comics published an ongoing tie-in comic that chronicled the juvenile lizards further adventures. Several of these stories were drawn by the legendary comics creator Steve Ditko. IDW Publishing has announced a special hardcover collection of these tales, to be released in February, 2013.


The genius artist Steve Ditko is a towering monster of awesomeness, and so is the character he chronicled... GORGO! If you love Godzilla - and who doesn't - you'll love Gorgo, who ravages London, New York City, and HOLLYWOOD! Gorgo goes head to head with the British Navy, atomic bombs, Communists, and aliens from the planet Corpus III! This is the complete Ditko Gorgo, 200-pages of comics, including six pulse-pounding covers all drawn during the height of Ditko's prowess concurrent with his Spider-man and Dr. Strange creative explosions. Scripts are by the fan-favorite writer Joe Gill. Introduction by Eisner award winner Craig Yoe with fascinating insight into the comics and the monster movie that inspired them. Every page is lovingly restored and the book is a large format hardcover to showcase the monstrous Ditko art.

I'm almost certainly going to want to get this book, even though I only remember Ditko drawing a couple of the Gorgo comic books. I didn't think there would be enough material to fill 200 pages...

I'm a big Gorgo fanboy too. The shtick with the giant monster rising and tearing up stuff only to be totally trumped when his even bigger momma shows and trashes even more stuff is brilliant. The counterpoint with the orphan boy and the displaced monster is one of the few times I've seen a non-Japanese movie try to make this connection between the creature and a human, at least not since the original King Kong.

I have to say though that I found the VCI DVD much superior to any version of the movie I've ever seen before. My old VHS copy was much muddier than the DVD and I saw things for the first time when I finally got to see it a few years ago.