What I'm Reading This Week 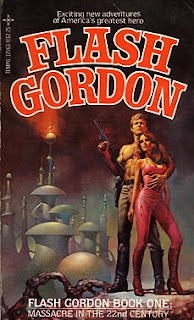 Though they started coming out the same year as the Dino DeLaurentis/Mike Hodges movie, they are not connected to it. In fact, unlike the film, which was based fairly faithfully on the original Alex Raymond newspaper comic strip continuity, this series of books instead eschews that backstory in favor of a whole new fictional universe.

Instead of being set in the 30's (or even the then-present, as was the 1980 film) with our heroes traveling to the wandering planet Mongo to battle the evil Ming the Merciless and saving Earth, these books take place in the 22nd century. Colonel Flash Gordon is a young widower and an agent for the Federation Central Intelligence Division, for which Doctor Zarkov is a scientific advisor. Dale Arden is Zarkov's niece, and at least in these first early chapters, is just a friend to Flash and assistant to her uncle. No Ming or Mongo. 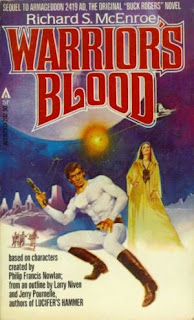 Actually, this pretty closely resembles the version of Flash Gordon from the short-lived 1950's TV series. On that show, set in the distant future, Flash (played by Steve Holland) and Zarkov were agents for the Galactic Bureau of Investigation, and Dale was their assistant.Of course, the Hagberg novels are much greater in scope, and aren't limited by the impoverished production values of that low-budget syndicated TV incarnation.

Anyway, I'm only up to chapter five, and I'm digging it so far. I also have book two, and if I enjoy them, I intend to hunt down the remaining four volumes.

After that, I hope to dig into the Ace Buck Rogers novel series from the 80s that were written by various authors, based on the original Philip Francis Nowlan novels, Armageddon 2419 A.D. and The Airlords of Han, from an outline by Jerry Pournelle & Larry Niven. There were four in that series, and I've had two of them on my shelf for years - which I've never read.

I am also continuing my program of re-reading the P.I. fiction that I first read in the Eighties. I just re-read Wayne Dundee's first Joe Hannibal novel, The Burning Season, and now I'm re-reading William DeAndrea's Killed In The Ratings. This was the first of eight novels featuring Matt Cobb, troubleshooter for a major television network. I have most of the books in the series, and look forward to revisiting them all. After that, well, probably either Robert J. Randisi's first Mile Jacoby book or one of the Peter Bragg novels by Jack Lynch.
Posted by Christopher Mills at 11:23 PM

Not sure how I missed these when they came out. I was reading tons of paperbacks then and loved Flash Gorden. I may have to hunt these down,

Warrior's Blood was a great story. Alas, it was tossed out by my Mom along with many comics. Apparently I was falling under some 'bad influences' by reading too much Sci-Fi back then.