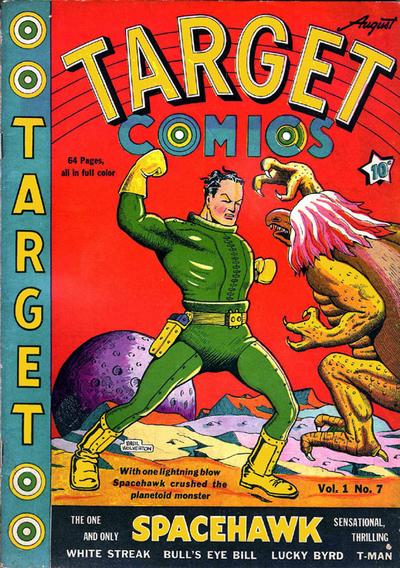 Another offbeat Golden Age space hero - just as insanely bizarre as Dick Briefer's  Rex Dexter of Mars - was Basil Wolverton's Spacehawk, who appeared regularly in Target Comics from Novelty Press back in the early 1940s. He only appeared on one cover, but his adventures were outright brainbatshit crazy.

Wolverton's art style was delightfully grotesque, and his aliens were just indescribable. His hero was astonishingly brutal - and mysterious (he didn't show his face until the third story!).

Back in the 90s, Dark Horse reprinted all (or most, I'm not certain) of Wolverton's Spacehak stories in a B&W miniseries. I don't know if it sold well or not, but I loved it.
Posted by Christopher Mills at 12:00 AM